Patriots 'not satisfied' after routing Jets in 1st home win 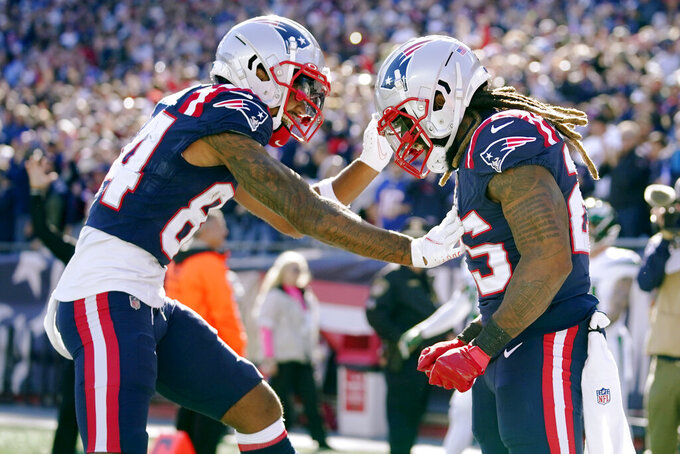 New England Patriots running back Brandon Bolden, right, is congratulated by Kendrick Bourne (84) after his touchdown during the first half of an NFL football game against the New York Jets, Sunday, Oct. 24, 2021, in Foxborough, Mass. (AP Photo/Steven Senne)

FOXBOROUGH, Mass. (AP) — The Patriots experienced their share of near misses in opening the season with four consecutive losses at Gillette Stadium.

On Sunday there wasn’t much they didn’t do well in routing the Jets 54-13 to post their first home victory of 2021.

The offense moved the ball at will, scoring on all five of its possessions in the first half and all six times it reached the red zone. It also was a season-best 7 of 12 (58%) on third downs.

The defense was just as active, forcing three turnovers, including one that set up a touchdown.

“Players were ready to go,” coach Bill Belichick said. “It was just some good, solid plays.”

Despite still not playing behind a fully healthy offensive line, rookie quarterback Mac Jones had his first career 300-yard passing game, completing 24 of 36 throws with two touchdowns. His team leading 47-13 in the fourth quarter, it earned him his first early exit of the season.

Jones said it was the kind of complementary football they’ve been trying to produce.

“That’s what we want to do and I think we got a little flavor of if we do everything right throughout the week and practice well and do our job in the game, it kind of translates over,” Jones said. “We’re not satisfied at all by any means.”

Receiver Kendrick Bourne, who tossed a 25-yard touchdown pass to Nelson Agholor on a trick play for New England’s first score and hauled in a 46-year reception, said it was “a game we needed to show us what we’re capable of.”

With his 1-yard TD catch in the second quarter, tight end Hunter Henry now has at least one touchdown catch in four straight games for the first time in his career. His previous high was a three-game stretch as a rookie in 2016 with the Chargers. The last Patriots tight end to have a four-game streak with a TD reception was Rob Gronkowski in 2013.

After injuries and illness left the Patriots with just one starter available on the offensive line each of the previous two games, they hoped they were turning a corner Sunday with the return of Isaiah Wynn (COVID-19 list), Mike Onwenu (COVID-19 list) and Shaq Mason (abdomen) to the lineup. Instead, Mason left in the fourth quarter after aggravating his injury.

It could require more shuffling this week for a group that had one of its best outings of the season. Jones was hit just four times by the Jets and sacked only once. New England also rushed for a season-high 148 yards.

Cornerback Myles Bryant was elevated to the active roster early last week following Jonathan Jones’ shoulder injury against Dallas. Jones was placed on injured reserve Saturday, giving Bryant an opportunity to get more playing time. He made the most of it, getting his first career sack and a forced fumble while playing a career-high 56 snaps in his third appearance of the season.

With Jones expected to have season-ending surgery, second-year player Bryant likely will have a chance to contribute even more going forward.

“Any opportunity for me I’m grateful for it and the capacity of what it was and being able to step up means a lot,” Bryant said. “I am going to go out there and practice harder than I did last week, and hopefully keep this thing going.”

Linebacker Matt Judon, who has been one of the most active players on defense for New England, had his quietest game of the season with just one tackle. He had 6 1/2 sacks and 16 solo tackles in New England’s first six games.

Along with McCourty, Smith and Mason, defensive lineman Carl Davis (wrist) and linebacker Harvey Langi (knee) left the game in the second quarter.

12 — the number of consecutive wins for the Patriots over the Jets. It is New England’s second-longest streak over one team in franchise history, behind only its 15 straight over the Buffalo Bills from 2003-10.

The Patriots are on the road for the next two weeks, beginning Sunday with a trip to face a Los Angeles Chargers team coming off a bye week.