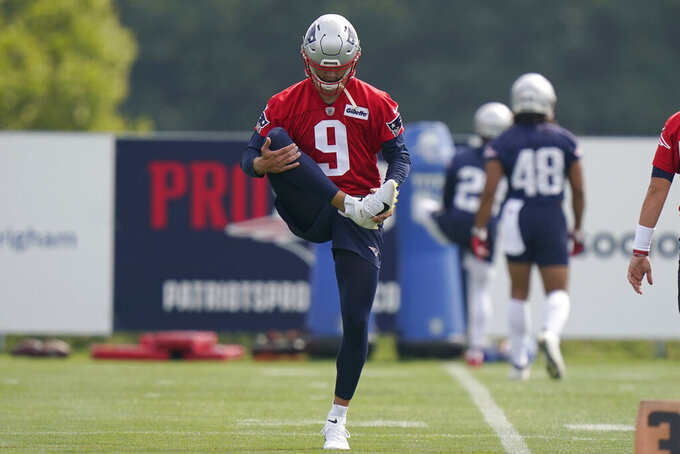 Activated off the injured reserve list, Damien Harris kicked off his second season with the New England Patriots by carrying 17 times for 100 yards (a 5.9-yard average) in a 26-10 loss to Kansas City in Week Four of 2020.

Yes, it was all a major step forward for a player whose rookie season consisted of four carries for 12 yards in a 33-0 win over the New York Jets.

“It was a good year here and there,” Harris said following the Patriots’ second training camp practice on Thursday. “Obviously, we had our ups and downs (going 7-9). This is a new year. We’re facing new challenges individually, collectively as a team, as a unit, as an organization, so it’s just about improving. We want to get past last year. It’s over with. It’s done.

“So what is this team going to be, what’s our identity going to be, how are we going to be this year as a team? That’s what we’re focused on. Just improving and getting better each and every single day that we’re out here.”

As for Harris, Patriots coach Bill Belichick saw dramatic improvement in a year’s time from a player the team thought highly enough to invest a third-round pick (87th overall) in the 2019 draft. That improvement has put the 5-foot-11, 213-pound Alabama product in a position to grab the lead role in a stable of a running backs that includes 2018 first-round draft pick Sony Michel, who has twice eclipsed 900 yards in a season, and eight-year veteran James White, the team’s passing-down back.

“I think Damien’s a player that improved a lot from Year One to Year Two,” said Belichick. “This year, he’s in a little different role. Now he has an opportunity to compete for a lead spot and so he has embraced that. He’s worked hard. He’s been here since the day after the season was over. He has worked as hard as anyone has in the offseason. I’m sure that’ll help his preparation.

“Heading into this camp, we’ll see how he does. He’s worked extremely hard. He’s a very dedicated player. I’ve been impressed by the commitment he has shown.”

Harris’ words following Thursday’s practice echoed the commitment the coach spoke of, those words reflective of a player looking to build upon what he did a year ago.

“Every year you’ve got to improve,” said Harris. “No matter whether you’re good at something, whether you need to improve, every year all you want to do is continue to get better (at) everything you do. I mean, it’s just the name of the game.

NOTES: Belichick admitted that third-year quarterback Jarrett Stidham, who is on the physically unable to perform list, “will miss a little bit of time.” … With Stidham out, the Patriots claimed 24-year-old Jake Dolegala, who had two stints on the team's practice squad in 2020, off waivers from Green Bay. Dolegala joins Cam Newton, Mac Jones and Brian Hoyer as the healthy QBs in camp.