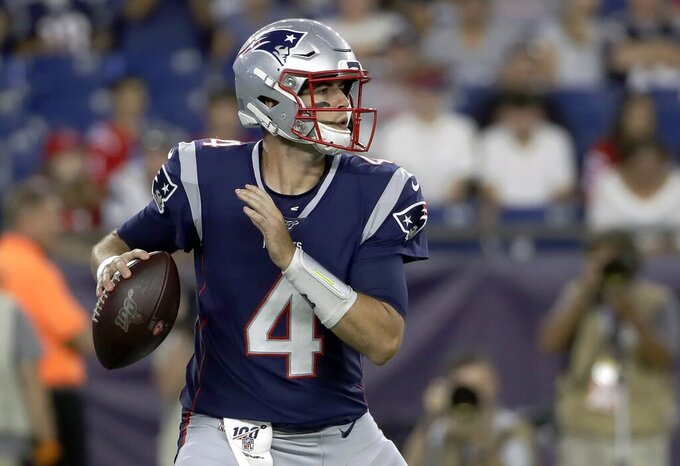 New England Patriots quarterback Jarrett Stidham drops back to pass against the New York Giants in the first half of an NFL preseason football game, Thursday, Aug. 29, 2019, in Foxborough, Mass. (AP Photo/Elise Amendola)

FOXBOROUGH, Mass. (AP) — Jarrett Stidham was awed by the responsibility of being the backup to 20-year veteran Tom Brady.

"I got the news that I was the No. 2 guy," Stidham said Sunday, a day after the New England Patriots finalized their 53-man roster to start the season. "And you get very excited for this role, obviously. But now I'm getting back to work, working as hard as I ever have, and trying to do everything I can to help out this team, and to help Tom out. That's my job."

The former Auburn standout beat out veteran backup Brian Hoyer, who played well in the second preseason game against Tennessee but didn't play in the final two contests.

"I thought both players played well in camp, and I liked both players," Patriots coach Bill Belichick said. "But in the end, there are a number of considerations that you have to make, so we did what we thought was best for the team. I still think Brian's a good player and it's a long season, so we'll see what happens."

Stidham credited Hoyer, a 10-year veteran, with guiding him through the transition from college to the pros.

"I can't speak highly enough about Brian," Stidham said. "He helped me a ton, especially when I first got here and was going to OTAs and minicamp. He was helping me in every way that he could. He's a true veteran and a true pro and I couldn't be more thankful for him."

Meyers, an undrafted rookie from North Carolina State, led the Patriots' receivers in the preseason with 20 catches for 253 yards and two touchdowns. His emergence may have contributed to the decision to release veteran Demaryius Thomas, who was recovering from a torn Achilles' tendon, although it's possible Thomas may return during the roster tweaking that will take place prior to the Patriots' opener at home on Sunday against Pittsburgh.

"Every day, I'll come here feeling that my job is on the line, because it truly is," Meyers said. "That's how I have to look at it. So every day, I'm coming here with the motivation to be the best I can."

Olszewski, also a kick returner, was relieved at the end of a day in which he was initially released, then informed not long before the 4 p.n. Saturday deadline that he would be retained.

"It was a fun day," he said. "I ended up being a Patriot. It was the happiest phone call of my life."

The native of Alvin, Texas, played receiver, returner and defensive back in the preseason. He wasn't going to share the news of his first phone call with family members, but quickly relayed his later good news.

"I called my older brother, my old man, my momma, and I called my little brother, in that order," he said.

Asked what he hoped to achieve now that he's officially a Patriot, Olszewski was succinct.