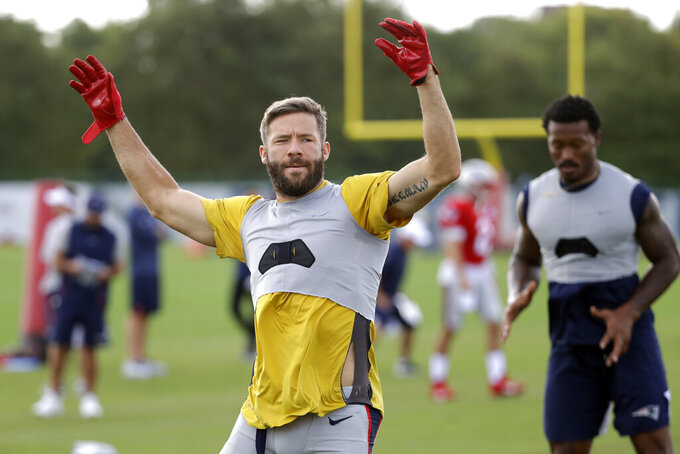 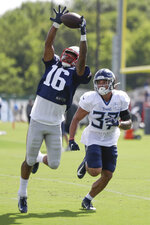 NASHVILLE, Tenn. (AP) — The Patriots' rookies surprised Titans coach Mike Vrabel at the start of their joint practice by serenading him for his 44th birthday.

"That was something that was unexpected but very appreciated," Vrabel said Wednesday. "It was a good idea by whoever came up with it. Probably Tom or Bill."

That would be either former teammate Tom Brady or Bill Belichick, the coach Vrabel won three Super Bowl rings with as a linebacker during his 14-year career. Now Vrabel is in his second season as head coach with the Tennessee Titans hosting Belichick and the Patriots for two days of practices before Saturday night's preseason game.

This session featured lots of trash talking and felt much more like a family reunion than an NFL training camp with all the ties between these franchises.

Vrabel started the talk as soon as Brady came onto the field, yelling at the three-time NFL MVP for walking and not jogging onto the field. Brady told Vrabel to pay attention to his own work in just the start of the barking between teams with lots of ties and former players now on the other roster.

The Titans coach stayed close to his defense working against Brady, all the better for the two to chirp at each other.

"It brought back a lot of memories just to be able to sit out there and they make a play and he turns around and says, 'Mikey you better cover that, you guys need to do this.' I'm sure I had plenty to say too," Vrabel said. "It was a lot of fun. We have a lot of respect for those guys. We can learn a lot from the way they practice and how they operate."

Cornerbacks Logan Ryan and Malcolm Butler and running back Dion Lewis all won Super Bowl rings with the Patriots before signing with Tennessee as free agents. Patriots cornerback Jason McCourty never played in the postseason through eight years with the Titans before finally joining his twin brother, Devin, in the New England secondary last season.

Ryan jumped up trying to knock down a Brady pass from his old teammate only to get knocked down by Patriots right tackle Marcus Cannon.

"It's all good," Ryan said. "We're competing. Tom said that he'll know every time I'm blitzing because he knows my mannerisms. I think I tricked him on one."

Brady got the better of a Titans' defense Wednesday that was sixth against the pass and third in fewest points allowed. Ryan said Brady dominates in a practice setting where defenders can't use all their tricks.

The Titans made clear they want their version of the Patriot Way when general manager Jon Robinson, who got his NFL start with the Patriots, hired Vrabel as their new coach in January 2018.

Vrabel and the Titans routed Belichick and the Patriots 34-10 last November. But the Patriots finished the season with their sixth Super Bowl title while Tennessee just missed the playoffs losing the regular season finale. Belichick said Vrabel's been a friend for a long time and did a great job in that game last season.

"We really got handled down here," Belichick said. "He's got an excellent staff, and I'm sure that he's teaching these guys a lot of football. He was really smart player, a very fundamental player, so I'm sure that you can see those strengths in the way he coaches his team."

NOTES: Titans WR Adam Humphries went to the locker room during practice, while Patriots OL Dan Skipper was taken to a tent on a cart for treatment in the heat. ... Titans RB Derrick Henry (left calf) caught some passes from Robinson before working in a sand pit. He has not practiced since the opening day of camp.