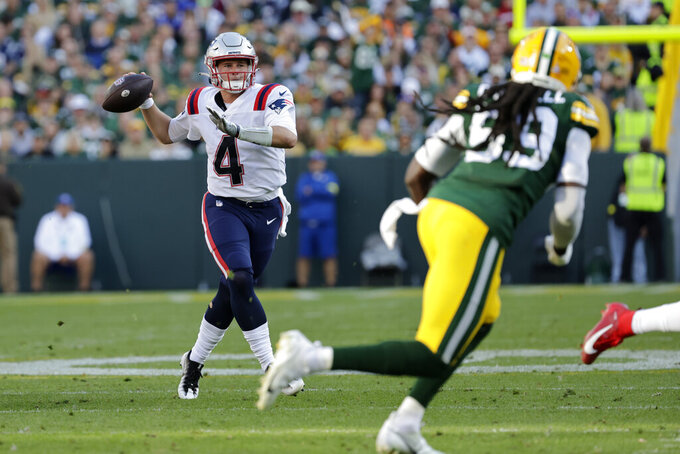 The rookie fourth-round pick from Western Kentucky began the season as New England’s third-string quarterback. But he was pressed into duty Sunday because of injuries to Mac Jones and Brian Hoyer.

Zappe didn’t put up big numbers, but he still managed to go toe-to-toe with four-time MVP Aaron Rodgers before the Patriots lost 27-24 to the Green Bay Packers on Mason Crosby’s 31-yard field goal in the closing seconds of overtime.

“Of course, it was exciting at first,” Zappe said. “It was a dream come true to play in an NFL game. It’s obviously not the outcome we wanted at all.”

Zappe went 10 of 15 for 99 yards, including a 25-yard touchdown pass to DeVante Parker. He also lost a fumble while getting sacked by Rashan Gary.

But he did enough to give the Patriots reason to believe they can compete even if Jones and Hoyer remain out for another week or two.

“Proud of the way he competed, man,” center David Andrews said. “Went really quickly from probably thinking he wasn’t playing much this year to getting thrown in the mix in a pretty hostile environment against a really good defense. I thought he led us well.”

Hoyer started the game in place of Jones, who left the Patriots’ 37-26 loss to the Baltimore Ravens last weekend with an injured left ankle. Hoyer led New England to Nick Folk’s 37-yard field goal on the game’s opening drive, but he got sacked by Gary on the team’s next series and departed.

“I saw him coming off the field (and) I didn’t know what was going on,” Zappe said. “Joe (quarterbacks coach Joe Judge) turned to me and said that ‘You’re going in the next series.’ I went about my way and started playing ball.”

Zappe kept New England (1-3) in the game by leaning on his running backs, with Damien Harris and Rhamondre Stevenson rushing for a combined 152 yards on 32 carries.

He led back-to-back touchdown drives in the second half to help the Patriots grab the lead.

His first touchdown pass put New England ahead 17-14 in the third quarter. Replays appeared to show that the play clock expired before the ball was snapped on Zappe’s touchdown pass to Parker, but no penalty was called.

“I thought he made some nice plays,” Rodgers said. “They obviously ran the ball pretty well, set up some action stuff and they kind of ran the same stuff we’ve been seeing, some deep crossers and some individual routes but I thought he threw the ball nice. He had the one turnover, but I thought overall he made some nice throws and it didn’t seem like he missed any that he should’ve had.”

But Zappe was unable to lead a winning drive in overtime after New England’s defense set him up with outstanding field position.

The Patriots forced a three-and-out on the opening series of overtime and got the ball at their 49-yard line after a 20-yard punt return from Marcus Jones.

They only needed a field goal to win the game. They couldn’t even get a first down. After two runs by Harris netted 5 yards, Zappe couldn’t connect with Hunter Henry on third down.

The Patriots wouldn’t get the ball again. After a punt backed them up to their 10, the Packers (3-1) drove 77 yards on 12 plays to set up Crosby’s winning field goal.

Zappe couldn’t help but wonder after the game about what he could have done to change the result. After all the ways the Patriots helped him through his debut, he wanted to repay them with a victory.

“I give credit to all my teammates,” Zappe said. “They kept me calm, they kept me getting the nerves out of me, they kept me in my space and cool, calm and collected. Everybody played well tonight, O-line played well, we ran the ball well.

“It really just comes down to me. I’ve just got to make more plays and the outcome is different.”