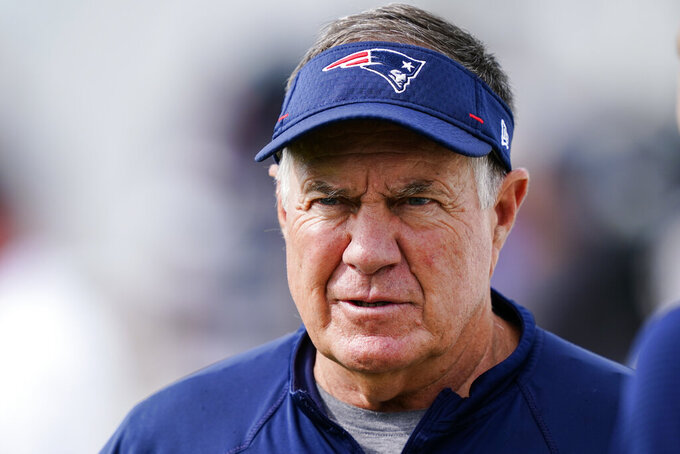 FOXBOROUGH, Mass. (AP) — The Patriots remade their defense in the offseason in hopes of bringing back the unit's disruptive reputation.

New England's first chance to show off those upgrades will be in Sunday’s season opener against the Miami Dolphins and explosive young quarterback Tua Tagovailoa.

“We’re excited for the challenge," linebacker Kyle Van Noy said. "In the division, a lot on the line right off the bat. You couldn’t ask for anything better.”

The Patriots went from being the NFL’s stingiest defense in 2019 to ranking in the middle of the pack this past season. Seeking to improve the unit, coach Bill Belichick went to the free-agent market.

That trio joins a core group of holdovers from last season including cornerback J.C. Jackson and linebacker Dont’a Hightower, who is back after opting out in 2020 because of COVID-19 concerns.

The defense's first task will be to corral the shifty Tagovailoa. The Dolphins also return tight end Mike Gesicki and have new playmakers including Jaylen Waddle, Tagovailoa’s former Alabama teammate.

After missing the first meeting with New England last season as he rehabbed from hip surgery, Tagovailoa ran for two TDs and led the Dolphins to a 22-12 win in Miami, becoming the first rookie quarterback to win against against Belichick since 2013 and the sixth to do it during his 21-year tenure in New England.

He said his approach to facing a Belichick defense for the second time is straightforward.

“I try to put myself in a situation where I’m Bill Belichick. If I was Bill Belichick, what would I want to do to stop myself?” Tagovailoa said. “That’s kind of how I try to go about that.”

He said preparing for the Patriots this time has been a little easier.

“Only because of the experiences I’ve had with a veteran like (Ryan Fitzpatrick) and then carrying it over to the experiences I’m now having with Jacoby (Brissett) in the room and just different ways of coaching,” Tagovailoa said. “For me, I try to find the middle and what works for me as far as my preparation going into a week like this.”

“He’s definitely a dangerous player, can do a lot of things really well, throw the ball anywhere on the field, definitely elusive and a tough guy to tackle, smart guy,” Belichick said. “So we have to be ready to go on all three levels to handle him as well as everybody else on their offense. So it’ll be a tough challenge Week 1. Hopefully we can get the guys ready to go.”

The Dolphins will be debuting a new play caller on offense after George Godsey took over those duties from Chan Gailey, who resigned in January. It will be the third straight year coach Brian Flores has had a different offensive coordinator.

While Miami's schemes didn’t look demonstratively different from last year in the preseason, Godsey said the challenge for him and co-offensive coordinator Eric Studesville will be to find new ways to keep defenses off balance.

Where the Dolphins are probably vulnerable is on the offensive line, which remains one of the NFL’s youngest groups. Tackle Austin Jackson is on the COVID-19 list.

As dangerous as Tagovailoa can be through the air, Godchaux said stopping him on the ground and winning the battle up front will be key.