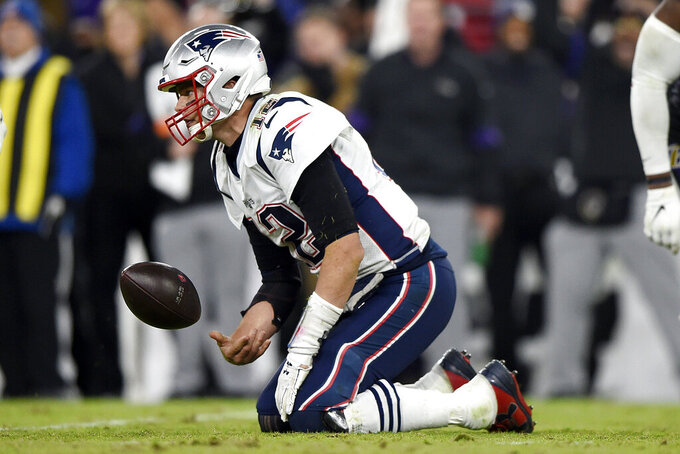 New England Patriots quarterback Tom Brady flips the ball after being sacked by Baltimore Ravens defensive end Jihad Ward on a third down play in the second half of an NFL football game, Sunday, Nov. 3, 2019, in Baltimore. The Ravens won 37-20. (AP Photo/Gail Burton)

Ravens dual-threat quarterback Lamar Jackson spread out the Patriots like no one has this season, utilizing his skills on the ground and in the air to account for three touchdowns in Baltimore's 37-20 win on Sunday night.

But it was the way Jackson and Baltimore controlled the game with their rushing attack that will be a focal point for improvement as the Patriots head into their bye. New England returns the following week to begin a tough four-game stretch against Philadelphia, Dallas, Houston and Kansas City.

The Patriots' defense had demoralized its previous eight opponents this season by limiting rushing yards, forcing turnovers and dominating on third down to keep drives short.

New England forced one defensive turnover Sunday, but Baltimore's 210 rushing yards were the most the Patriots have given up in 2019. It helped Jackson end New England's 21-game win streak against first- or second-year quarterbacks.

He also is the first quarterback to score multiple rushing touchdowns in a single game against the Patriots since Tim Tebow did it in 2011 with the Broncos.

"It was a combination of things. They're a good running team," Patriots coach Bill Belichick said. "We've got to coach better, we've got to play better, we just have to do a better job all the way around, so it was a little bit of everything."

Equally glaring was how the Ravens were able to control time of possession.

New England entered the game having allowed a drive of more than 5 minutes only once all season.

The Ravens had four such drives. Two lasted more than 8 minutes, including their final scoring drive of the night. It spanned 14 plays and 68 yards, ate up 9:35 and ended with a 1-yard touchdown run by Jackson.

"We stayed on the field too long," linebacker Kyle Van Noy said. "We have a lot of things to fix. We have the right group to do it with."

Patriots safety Devin McCourty said their objective during their week off is to ensure that Baltimore's success against them won't become a blueprint for remaining opponents.

"Anytime you lose, it sucks. We'll sit on this one for an extra week, but I think sometimes an extra week can be good," McCourty said. "We'll get to watch the film. When a team has success on you, you're going to see some of those plays again. Nobody has Lamar Jackson, but we'd be crazy to think things that they did tonight, we won't see again."

If there was a bright spot for the Patriots, it was in the kicking game. Nick Folk, who debuted after New England cut Mike Nugent last week following a rough four-game stretch, made both of his field-goal attempts and a pair of extra points on Sunday.

Brady's interception set up Baltimore's final score of the game.

"Losses always find a way to recalibrate how you see yourself," Brady said. "We obviously have a lot of work to do. Tonight, obviously, was not good enough."

Sanu had 10 catches for 81 yards and a touchdown in his second game since the Patriots acquired him from Atlanta. He said his comfort in the offense is growing.

New England's offensive line struggled against the Ravens, allowing Brady to be sacked twice. It also had a hard time opening holes in the run game, which made the Patriots more predictable in the second half.

Sanu is the 74th player to catch a touchdown pass from Brady, who already held the NFL record for most unique TD receivers.

After their bye, the Patriots return to action Nov. 17 at Philadelphia.