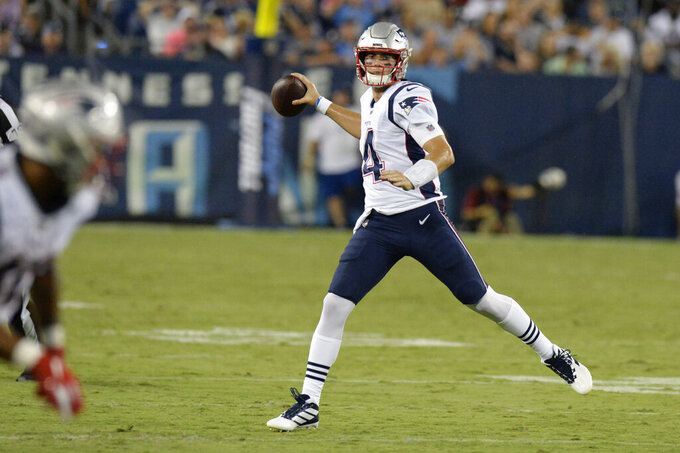 NASHVILLE, Tenn. (AP) — Jarrett Stidham threw a 23-yard touchdown pass to Damoun Patterson with 4:12 left, rallying the New England Patriots to a 22-17 victory over the Tennessee Titans on Saturday night.

Stidham picked up where he left off in his previous trip to Nissan Stadium. Stidham had five TD passes here helping Auburn rout Purdue in the Music City Bowl last December, and this time the rookie was 14 of 19 for 193 yards helping the Patriots (2-0) come back from a 17-8 halftime deficit.

Two days of practices against the Titans was enough for Patriots coach Bill Belichick to let Tom Brady watch a second straight exhibition with New England's options at wide receiver thin because of injuries.

Marcus Mariota started for the Titans (1-1) and shook off a pair of three-and-outs before his best drive this preseason. He capped a 10-play, 87-yard drive with an 11-yard TD pass to his favorite target, three-time Pro Bowl tight end Delanie Walker, who broke his right ankle in the 2018 season opener.

With kicker Ryan Succop on the physically unable to perform list, coach Mike Vrabel let Mariota go for 2 against his old team. Mariota looked to throw, then ran to the end zone before going into the air and flipping over Patriots defensive back Duron Harmon for an 8-0 lead. Mariota was 6 of 9 for 63 yards passing.

HOUSTON (AP) — Deshaun Watson took advantage of one series in his preseason debut looking sharp in directing a 75-yard drive capped by a 4-yard touchdown pass to DeAndre Hopkins to help Houston over Detroit.

Watson, who sat out in a loss to Green Bay last week, was 5 of 7 for 60 yards and scrambled once for 7 yards. After being sacked an NFL-high 62 times last season, the third-year player had plenty of time to throw while facing a Lions defense which opened the game with the bulk of its starters.

Hopkins, also making his preseason debut, had two receptions for 17 yards and shook off Detroit's Quandre Diggs to get open and make the TD catch that put Houston up 7-0.

Hopkins, who had a career-high 1,572 yards receiving last season, was the only one of Houston's top receivers to play. Will Fuller, who is healthy after tearing a knee ligament last season, sat out and the Texans were without Keke Coutee, who injured his ankle last week.

Detroit quarterback Matthew Stafford didn't play for the second straight week, with the Lions instead starting Josh Johnson. Johnson was signed a week ago after backup Tom Savage suffered a head injury in the team's preseason opener against the Patriots. Johnson was 9 of 18 for 85 yards with an interception.

HONOLULU (AP) — Dak Prescott completed all five of his pass attempts in his only series of work as the Cowboys came away with a win over the Los Angeles.

With starting quarterback Jared Goff among the large number of Rams' starters that did not make the trip to Hawaii, Blake Bortles got the start and finished 7 of 11 for 62 yards. His 7-yard scoring pass to JoJo Natson capped Los Angeles' second drive — which was extended by a fumbled punt return by Dallas return man Reggie Davis and recovered by rookie Jake Gervase.

Dallas (1-1) pulled back ahead late in the third quarter, when third-string quarterback Cooper Rush found Devin Smith for an 8-yard touchdown.

Pollard, who started in place of Ezekiel Elliott, finished with five rushes for 42 yards. Elliott, a two-time league rushing champion, missed his second preseason game while he continues his holdout. Alfred Morris, who signed with the team during training camp, saw his first action of the preseason and carried three times for 6 yards, all before halftime.

PITTSBURGH (AP) — Mason Rudolph guided a long first-half touchdown drive to perhaps nudge ahead of Josh Dobbs in the race to be the backup behind Ben Roethlisberger and Pittsburgh beat Kansas City.

Rudolph finished 10 of 15 for 77 yards while Dobbs completed 6 of 11 for 95 yards with a red-zone interception on a night the Steelers (2-0) opted to keep several key starters on the sideline, from quarterback Roethlisberger to Pro Bowl offensive linemen David DeCastro and Maurkice Pouncey to rookie linebacker Devin Bush.

Kansas City coach Andy Reid suggested Patrick Mahomes would play most of the first half.

The reigning NFL MVP — who directed a touchdown in his lone drive in Kansas City's preseason opener last week — did little during two series of work following a thunderstorm that forced the opening kickoff to be pushed back nearly an hour.

Mahomes completed just 2 of 5 passes for 11 yards, a far cry from his previous visit to Heinz Field, when he threw for six touchdowns in a Week 2 win last September that served as a harbinger of the season to come.

Mahomes' best play during his cameo may have been his decision to slide during an 8-yard scramble, something he didn't do a week ago when he lowered his shoulder against Cincinnati rather than step out of bounds.

Chad Henne found Mecole Hardman for a 17-yard touchdown late in the first half for Kansas City (1-1), which managed a lone touchdown a week after putting up 38 against the Bengals. Hardman, a second-round pick, has two touchdowns in two weeks and his rapid emergence could give Reid another option to play with in what could be the NFL's most potent offense.

INDIANAPOLIS (AP) — Garrett Gilbert threw two touchdown passes in the first half and David Blough added another TD pass in the second half, leading Cleveland past Indianapolis.

Cleveland (2-0) has won nine of its past 10 preseason games — this one with its top two quarterbacks sitting out and Kareem Hunt returned to the field for the first time in nearly nine months. It's the first time the Browns have beaten the Colts in the preseason since 1979 when the franchise was still located in Baltimore.

Quarterback Chad Kelly did everything he could to keep the Colts' winning streak intact.

After Blough gave Cleveland a 21-7 lead early in the third quarter with a 4-yard TD pass to Derrick Willies, Kelly tried to rally the Colts.

He took advantage of one roughing the passer call to get the Colts into scoring position then threw a 24-yard TD strike to Ross Travis, who drew a lowering the helmet penalty on the play. Kelly's 1-yard conversion pass to Hale Hentges made it 21-18. And Kelly led the Colts to the Browns 9-yard line in the final minute before Will Harvey swatted away Kelly's final throw on fourth-and-1.