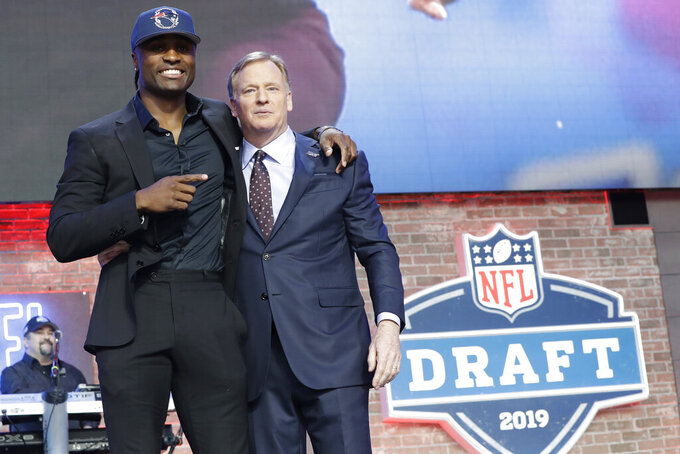 FOXBOROUGH, Mass. (AP) — Jarrett Stidham now stands where several others have before him — as a possible successor to Tom Brady as quarterback of the New England Patriots.

But like nine other drafted signal-callers before him, Stidham knows it's best to concentrate solely upon making the football team first and worry later about what his role may be when the ageless Brady finally decides to hang up his cleats.

"It's a tremendous opportunity to learn under him and (backup) Brian Hoyer," said Stidham, the Auburn quarterback selected Saturday by the Patriots in the fourth round of the draft.

"To be in the same room with those guys and to learn from them, it's going to be great and I'm really looking forward to it."

Stidham, a two-year starter at Auburn, was the 133rd overall pick, 66 positions higher than Brady's selection in 2000.

Of them, only Cassel had any significant playing time with the Patriots, playing most of the 2008 season after Brady, who will be 42 in August, suffered a season-ending knee injury in the opening game against Kansas City.

The Patriots also signed Hoyer, their current backup, as an undrafted free agent in 2009 and brought him back to the team in 2017 after brief tenures with six other NFL teams.

"I don't think I feel any pressure," Stidham said. "I'm sure everybody wants to be as good as Tom Brady someday, but I've got to take it one day at a time. I'm going to work as absolutely as hard as I can to make sure I can do whatever it is to help this organization out."

Nick Caserio, the Patriots' director of player personnel, came away impressed with Stidham after a lengthy meeting with him at Auburn's pro day.

"He's a smart kid, pretty mature, picks things up well," Caserio said. "So we'll see how it goes. He's going to transition into a system that's a little bit different in terms of play-calling and some of the other things he'll be asked to do here. But he's an impressive kid."

The Patriots made 10 selections in all over the three days, engineering seven trades, including three with the Los Angeles Rams, whom they defeated 13-3 in the Super Bowl.

Although they did not address the hole at tight end left by the retirement of Rob Gronkowski, the Patriots appeared to find several players they expect to contribute immediately.

At the top of that list would be their first-round pick, wide receiver N'Keal Henry of Arizona State, whose 6-foot-3 size and productivity should help the Patriots stretch the field if suspended veteran Josh Gordon is not reinstated by the league.

Vanderbilt cornerback Joejuan Williams, taken in the second round, will have the chance to flank Pro Bowl veteran Stephon Gilmore, while seventh-round pick Ken Webster of Mississippi could add depth.

The Patriots selected Alabama running back Damien Harris in the third round, 87th overall. Harris joins a talented position group that includes Sony Michel and James White, but his addition may put the oft-injured Rex Burkhead at risk. This may have been the Patriots' only "best athlete available" pick of the first two days.

The true measure of a draft isn't always apparent immediately, but the Patriots appeared to take an effective, targeted approach to fill needs at receiver, cornerback, and the offensive and defensive lines. But other than recent free-agency signee Austin Seferian-Jenkins, the Patriots have not replaced the offensive productivity of Gronkowski at tight end.

Any discussion of the Patriots' remaining needs for 2019 has to include consideration of the 2018 draft. Several 2018 selections are returning from the injured reserve list and are expected to compete for positions the Patriots didn't address in this draft.