Pats' vet Slater changing with the times to remain effective 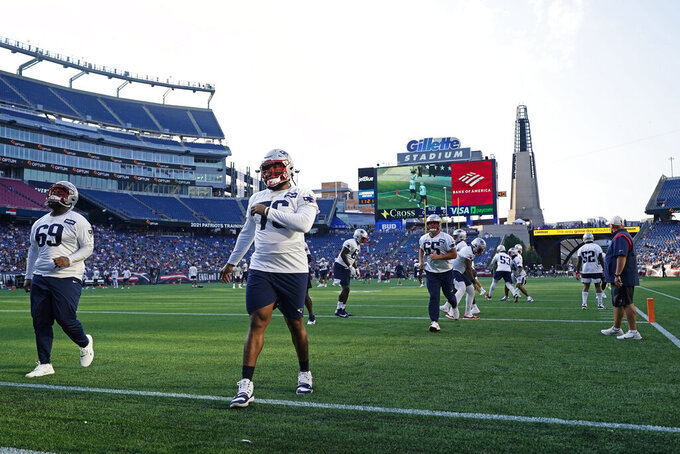 FOXBOROUGH, Mass. (AP) — Training camp has changed for Matthew Slater since he initially reported to the New England Patriots as a fifth-round draft choice out of UCLA in 2008.

“Oh, man,” Slater said Sunday when asked what he remembers about his first camp. “Thinking I was going to get cut every day. There was just so much that I didn’t know and understand about playing in this league. I didn’t know what my future looked like in this league. There was a lot of angst as far as what’s today going to look like, what’s this period going to look like, can I handle what’s being thrown at me.

“It was a very stressful time. I enjoyed it, as crazy as that sounds, because I was living my dream, but it was much different then than it is now.

"The journey has been really, really great, so I’m thankful for those early years of struggle because I think they’ve made me into a better football player.”

Thirteen years later, the resume of the son of Pro Football Hall of Fame offensive lineman Jackie Slater has put together on the Patriots’ special teams units is impressive in its own right.

Slater’s nine career Pro Bowl berths as a special teams player are the most in NFL history, eclipsing Steve Tasker’s seven with Buffalo. He has played on three Super Bowl champions and been elected the Patriots’ special teams captain for 10 straight years.

“The journey,” as he calls it, has gone by with the speed he often displays in his role as a gunner on Patriots special teams.

“It really goes by fast,” Slater said. “I never dreamed in a million years that I would play this long in the league. There are so many great athletes, so many great teams. I never thought of myself as a great athlete or a great this or that. I’ve just always been appreciative of my opportunity, keep my head down, keep working hard and see where that gets me. I thank God for the opportunity he’s shown me the last 14 years.”

In this, his 14th camp with the Patriots, Slater admits his routine has changed.

“I think the longer you play, you start to learn what you need to do to get your body in a certain place, and I think for me it’s about my nighttime routine, the sleep that I try to get, my diet, the things that I eat, how intentional I need to be in the weight room,” Slater said. “I think a lot of times you hear people talk about as you older, that you need to work smarter. In a lot of people’s minds, smarter sometimes equals less and that hasn’t been the case for me.

“I think Moses Cabrera (the team’s head strength and conditioning coach) has always challenged me to get out of my comfort zone, and I’ve found that as I’ve gotten older I’ve had to do more physically to maintain. So I’ve spent more time in the weight room, more time with preventative exercises, more time stretching and more time researching and asking questions about my diet. So I think that now, as opposed to just being 22 and coming in and running fast, there’s a lot more that goes into the process.”

The Patriots’ 10th training camp practice marked tight end Devin Asiasi’s 2021 summertime debut. Asiasi, who was been placed on the COVID-19 reserve list at the outset of camp, was removed from the list and suited up for practice.

A third-round draft pick out of UCLA in 2020, Asiasi appeared in nine games as a rookie, catching two passes for 39 yards, including a 26-yard touchdown reception from Cam Newton that proved to be the game-winning score in the Patriots’ 28-14 victory over the New York Jets in their season finale.

Saturday may have been a day off for the players, but the Patriots' front office was busy making roster moves.

Linebacker Raekwon McMillan and tight end Dalton Keene were placed on the injured reserve list. With the loss of McMillan, linebacker Cassh Maluia, a 2020 sixth-round draft pick out of Wyoming, was re-signed by the team.

Maluia appeared in nine games with the Patriots last year, but failed to register any statistics in that time. He was released by the team on March 23.