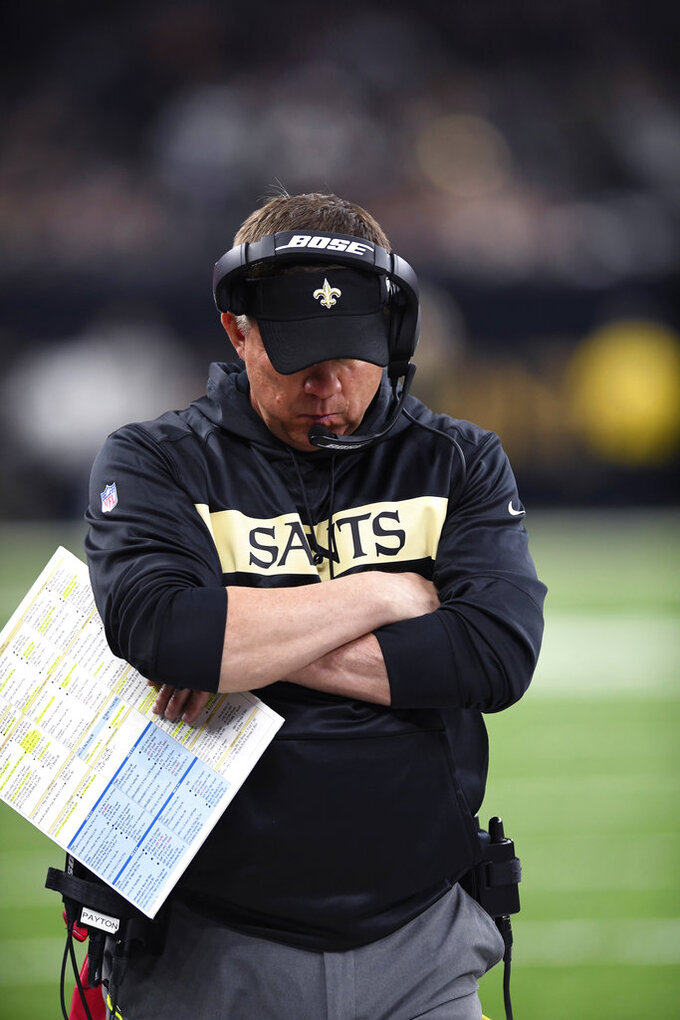 New Orleans Saints head coach Sean Payton walks on the sideline in the first half of an NFL football game against the Carolina Panthers in New Orleans, Sunday, Dec. 30, 2018. (AP Photo/Bill Feig)

The end of the regular season meant a number of his colleagues were getting fired .

That meant clubs with new vacancies would be requesting interviews with assistants on the most successful teams, such as New Orleans, during the very time Payton wants to focus on getting ready for the playoffs.

While Payton tersely mentioned that assistants such as defensive coordinator Dennis Allen, offensive coordinator Pete Carmichael Jr. and tight ends coach Dan Campbell all would make good head coaches, he said he didn't want to talk about that now. He was more concerned with the recent performance of his team. New Orleans' 33-14 loss at home to Carolina on Sunday gave the Saints two losses in their past five games. They needed fourth-quarter comebacks in their past three victories, two of which were decided by just three points.

"With the way we played yesterday and some of the things that we've done offensively recently, our focus is going to be strictly on the Saints and the fundamentals and techniques we need to improve on," Payton said. "We've got a lot of things we want to improve on — and this week gives us a chance to do that."

As the NFC's top seed, New Orleans has a first-round bye and is just two home victories from reaching the second Super Bowl in the franchise's 52 seasons. What remains to be seen is whether the Saints can recapture the juggernaut form and swagger of midseason, when they posted a handful of multi-touchdown triumphs.

"The No. 1 seed guarantees you nothing except you host a playoff game," Saints defensive tackle Sheldon Rankins said, noting that New Orleans cannot afford to dismiss Sunday's loss to Carolina as an outlier — even if it was a low-stakes game with numerous starters seeing less action than usual.

Quarterback Drew Brees and dynamic running back Alvin Kamara were among the Saints that saw no action on Sunday, and numerus others saw their snap counts scaled back.

Still, they expected to be more competitive than they were. They were down by 30 before scoring their first points in the fourth quarter, and it was the first time since Payton took over as coach in 2006 that his team had been shut out at home in the first half.

"When teams start to game-plan for us, they're going to turn on that tape," Rankins said. "They're going to see things they think they can attack. So for us, it's on us to fix those mistakes."

Tight end Ben Watson said it is common for fundamentals to slip on all clubs throughout the season, particularly as it relates to the more physical elements of football, such as blocking to tackling, as coaches focus more on preserving players' health.

"You're usually as fundamentally sound as you're going to be at the end of training camp," Watson said. "Fast-forward five months, our practice aren't as long, our practices sometimes aren't padded — not just us, everybody — because of the attrition that happens during the season.

"Fundamentals is what's going to take you where you want to go. It always has. It always will," Watson said. "Over time, when you get into game plans and you're not just doing that all the time, you lose some of that. So now is a good week to just sharpen that stuff up."

Meanwhile, veterans who've won championships have been trying to share their experience with younger players about the level of focus required to advance in the playoffs.

"You've got to really embrace this opportunity that we have because you understand it's very hard to get in this position," said offensive tackle Jermon Bushrod, who was part of the Saints only Super Bowl team 10 seasons ago. "You've got to really focus and take your preparation to the next level and eliminate distractions.

"Whether it's turning the TV off, getting off the phone or going to bed early, we've got to find a way to give ourselves, individually, an extra edge," he said.