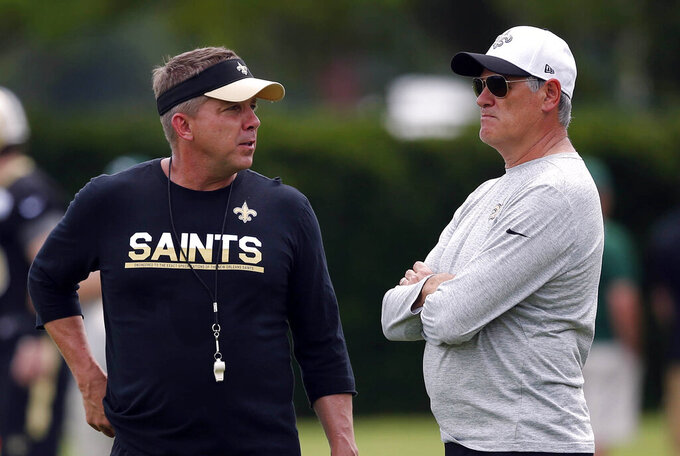 NEW ORLEANS (AP) — Saints coach Sean Payton says the club’s decision to occupy four floors of a hotel during training camp is simply an effort to cut down on the sheer number of people going their separate ways each day during a pandemic.

Payton said that along with 80 players on the roster during camp, there are about 90 others -- such as coaches and support personnel – who are involved in daily operations.

So the Saints sought to create an optional “bubble” where players and staff could stay for about a month, during which they’d have minimal contact with family or the public as they try to avoid contracting the corona virus.

“It’s really about trying to reduce the possible exposure, not eliminate,” Payton continued, noting that staying in the hotel is optional and that at some point during camp, those staying there are bound to visit with family. “You’re just trying to reduce those numbers and I think that could just help the team.”

Payton said there is currently no plan to keep the hotel space during the regular season, but he expects similar plans to be adopted by teams that make the playoffs.

“Teams will at some point say, ‘You know what? This is too important at this time of the year,’” Payton said. “They’ll begin to quarantine themselves or find a way to be smart about that.”

The Saints have combined for an NFL-best 37 victories during the past three regular seasons, only to be bounced from the past three postseasons in losses decided on the final play of each game.

So, Payton and general manager Mickey Loomis sought to err on the side of doing more than required by the NFL in an effort to keep the virus from interfering in what New Orleans expects to be another run at a Super Bowl.

“It was me and Mickey talking about how can we take the protocol given to us by the league and then further improve on it ... and really looking at ways to be a little bit better than the norm,” Payton said.

Payton was the first NFL coach known to contract COVID-19 back in March. He has said he had mild symptoms for a few days.

The Saints have not had any positive tests since players began reporting to team headquarters for testing on July 27. This week, the Saints began holding meetings and performing non-padded “walk-through” practices.

But Payton predicts the NFL will have positive cases throughout the season because the league is not operating in the same kind of highly regulated, monitored and restricted “bubble” in which the NBA and NHL have operated while recently restarting their seasons.

"We’re fooling ourselves if we think that’s not the case,” Payton said.

“Maybe you live with a spouse, three kids, maybe two kids, but each day, there are multipliers there,” Payton said. “We’re certainly trying to be smart in limiting our outside contract, but when you’re not operating in a clean bubble ... then you’re going to have positive tests."

Payton said the majority of players and staff have been receptive to staying in the hotel.

Among those is punter Thomas Morstead, a father of school-aged children who has made New Orleans his primary residence.

“I am not going to be 100% there every single night,” Morstead said. “There’ll be some times where I need to get home or need to help out, but I’m going to try and stay at the hotel as often as possible.”

While the Saints have taken numerous measures to make team headquarters relatively safe, Payton said not everything has worked as designed.

He said contract tracing devices have produced “a ton of technical errors,” in monitoring how long people inside the practice facility are within six feet of each other.

“We’ve had a number of these that ‘Player A’ registers that he was next to coach Payton for 18 minutes and then mine registers I was next to him for 29 minutes,” Payton said.

Payton also said he’s “skeptical’ of the clear plastic “splash shields” that can be fitted inside the face masks.

“The jury’s still out on some of that. When you breath there’s still a ventilative hole right there,” Payton noted. “That’s an option that’s available. I’m anxious to see any studies or see some experts’ opinions.”