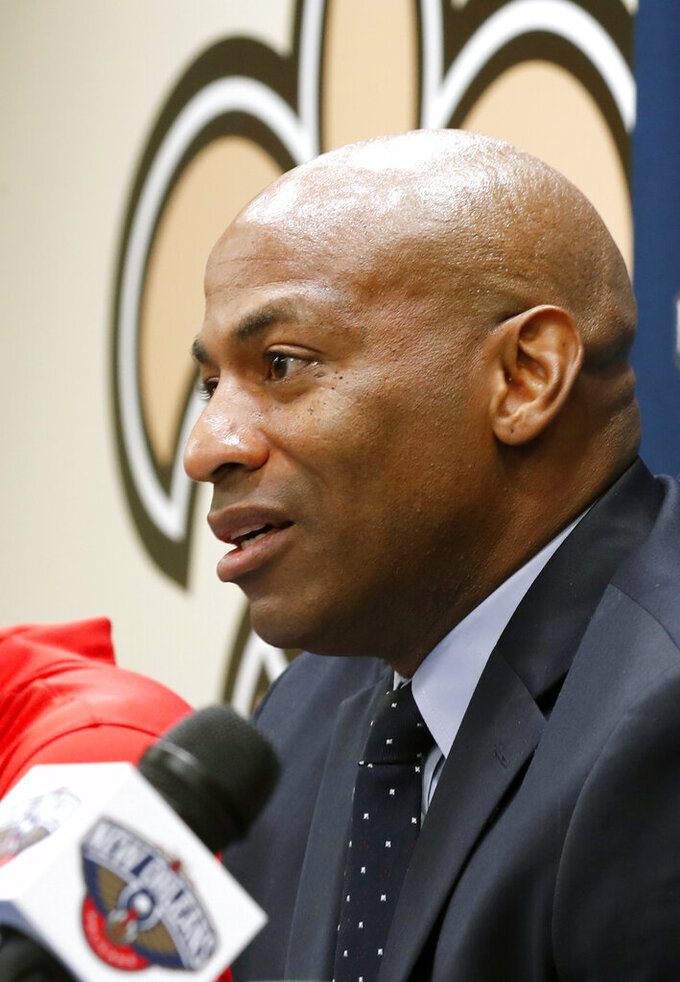 FILE - In this July 13, 2018, file photo, New Orleans Pelicans general manager Dell Demps speaks at a news conference in Metairie, La. A person familiar with the situation says the Pelicans have fired general manager Dell Demps. The person spoke to The Associated Press on condition of anonymity on Friday, Feb. 15, 2019, because the club has not announced it. Demps did not immediately return voice and text messages left with him Friday morning. (AP Photo/Gerald Herbert, File) 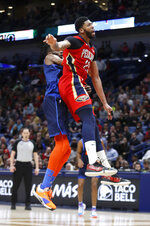 NEW ORLEANS (AP) — The New Orleans Pelicans have decided to fire ninth-year general manager Dell Demps and start the process of finding someone to deal with the fallout of All-Star Anthony Davis' recent trade demand.

Demps' dismissal comes after Davis said in late January that he would not sign an extension with New Orleans and wants to be traded to a contending team.

"As difficult as these decisions are, my responsibility is to provide the leadership and resources necessary to deliver a winning team to our fans and community," Pelicans owner Gayle Benson said Friday in a written statement. "I take that responsibility seriously and would like to assure our fans that I am prepared to provide any, and all, resources required to compete for championships."

Davis has another season remaining on his contract after this one and this season's trade deadline has passed, meaning no trade will happen until summer under the new front office regime.

Davis, the No. 1 overall pick in the 2012 NBA draft out of Kentucky, has been named an All-Star six times in his first seven seasons, so the return on a trade for him should be considerable and could set course for the Pelicans for seasons to come.

If hired soon enough, the new general manager also would oversee the upcoming draft and decide the future of coach Alvin Gentry, who for now is being retained.

Benson said she will hire outside consultants to help her begin the process of restructuring the Pelicans' front office, noting that the new leader of the basketball operations department will report directly to her.

Since the Benson family bought the team in 2012, Demps had been reporting to executive vice president Mickey Loomis, who also serves as Saints general manager.

Former Atlanta Hawks general manager Danny Ferry, who has spent the past three seasons in a consulting role with New Orleans, has been appointed interim general manager.

"While we still have many more critical decisions to make when this season comes to an end, I am focused on making sure we are properly positioned to succeed and that we are headed in the right direction," Benson said.

Demps' last game in charge was Thursday night, a 131-122 victory over Oklahoma City that was overshadowed by Davis leaving with a left shoulder injury at halftime. Davis could be seen leaving the arena during the second half with his agent, Rich Paul, to get an MRI exam that a person familiar with the situation says revealed a muscle bruise. The injury makes his availability unclear for this weekend's All-Star game and related events.

Demps received his only general manager position with New Orleans in the summer of 2010 and the Pelicans have made the playoffs three times during his tenure, advancing to the second round once.

The Pelicans enter this season's All-Star break at 26-33 and unlikely to make the Western Conference playoff field this season.

New Orleans hired Demps in large part because of his front office and scouting experience with San Antonio, widely seen as the model for contending in a small market.

He arrived during uncertain times for the franchise. Star point guard Chris Paul, a 2005 New Orleans first-round draft choice, was already determined to leave the club because of ownership uncertainty. After Demps was hired, the NBA bought the club from then-owner George Shinn, who was having cash flow problems.

When Demps tried to trade Paul to the Los Angeles Lakers, the NBA rejected the deal, and Demps ultimately settled on a trade with the Clippers that brought in Eric Gordon, Chris Kaman and Al-Farouq Aminu — none of whom remain with the club. Gordon tried to leave as a restricted free agent in 2012, signing an offer sheet from the Phoenix Suns. But Demps said at the time that the Pelicans could not afford to lose Gordon and matched the four-year, $58 million offer.

The purchase by Tom Benson gave the Pelicans stability and deeper pockets to build around Davis, but the fact that Benson was then in his 80s increased pressure to win quickly.

Benson died last March, and his third wife, Gayle, a New Orleans native with a background in the interior design business, inherited sole ownership of the Saints and Pelicans.

Demps traded most of the Pelicans' draft picks away for more proven players during his tenure, but those moves did not always pan out on the anticipated timeline, or at all. Demps traded two first-round picks for Jrue Holiday. But he missed most of his first two seasons in New Orleans because of recurring setbacks with a lower leg injury before emerging more recently as the Pelicans' second-best player.

He traded 2016 first-round pick Buddy Hield along with a 2017 first-round pick for Cousins — a move that fizzled when Cousins tore his Achilles during his first full season with the club and then decided to leave last summer in free agency.

New Orleans traded away its 2018 first-rounder last season to acquire Nikola Mirotic, who was traded to Milwaukee at this season's trade deadline, shortly after the Davis fallout forced the Pelicans to start planning for a future without their marquee player.

Meanwhile, the Pelicans have been saddled by salary cap burdens resulting from expensive free-agent signings of players who subsequently struggled, such as center Omer Asik and forward Solomon Hill.