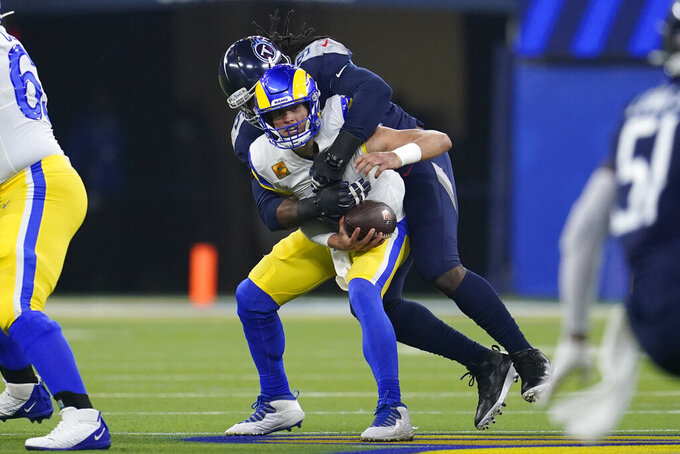 INGLEWOOD, Calif. (AP) — Rams quarterback Matthew Stafford didn't shy away in the assessment of his performance after Los Angeles' 28-16 loss to Tennessee on Sunday night.

“I kind of settled in during the second half, but by that time I had done too much damage,” he said.

A pair of Stafford interceptions in the second quarter gave Tennessee a 14-3 lead, but the veteran quarterback wasn't the only one who had a bad night against the Titans, who have the AFC's best record at 7-2.

The Rams were penalized 12 times, which is the second-most in McVay's four-plus seasons in charge. The 115 yards are the highest in McVay's 73 regular-season games.

Three of the Titans' 16 first downs were via Rams' penalties, including a pair of roughing the passing calls on the drive that culminated with Adrian Peterson's 1-yard TD run to give Tennessee a 28-9 lead late in the fourth quarter.

Aaron Donald, who got one of the roughing penalties when it looked as if he shoved Ryan Tannehill out of bounds, did a good job of hiding his frustration about the call after the game.

“You have to keep playing and not let that affect you. That’s all I have on that,” he said.

Stafford praised the defense for trying to keep the Rams in the game. Even though Tennessee had just 194 yards of total offense — the ninth-lowest yards by a team in a game this season — Donald wasn't happy that the Titans converted both of their red zone opportunities into scores.

“They were in the red zone twice and we didn’t hold up. We have to be better as a team,” he said.

One of those red zone chances came on Stafford's first interception. Rather than taking a safety or trying to throw it high over Robert Woods' head, Stafford launched an off-balance throw that was easily picked off by Titans' linebacker David Long Jr. and returned to the LA 2-yard line. Tennessee took the lead on the next play with a 2-yard TD pass to Geoff Swaim.

Stafford then threw his 24th pick-6 on the ensuing possession to Kevin Byard to spot the Titans a 14-3 advantage.

The first half was easily Stafford's worst since being acquired by the Rams during the offseason. He threw for only 62 yards and his 25.5 passer rating in the first half was the third-lowest of his 13-year career.

Stafford sat most of practice during the week due to a back issue, but coach Sean McVay and Stafford refused to use that as an excuse for the poor outing.

“He made some uncharacteristic plays but I'm not going to blame it on that,” McVay said. “I didn’t put our team in a position to make plays and have a rhythm and routine.”

Stafford came in being pressured on only 5.4 of his dropbacks per game, but he was pressured a season-high 13 times by the Titans, according to Next Gen Stats. Stafford attributed three of his five sacks to Tennessee playing strong coverage.

“I held on to it too long and was trying to be aggressive. I have to get it out early because there were guys underneath,” said Stafford, who finished 31 of 48 for 294 yards.

The loss also hampered Los Angeles in other ways. Instead of remaining tied with Arizona atop the NFC West or taking firm control of the second seed after losses by Green Bay and Dallas, the Rams (7-2) are one of four teams in the conference with two losses.

“We have to play cleaner football. I want to see what we learn from our response. The last time we had a setback (a 37-20 loss to Arizona on Oct. 3), I liked how we responded,” McVay said.