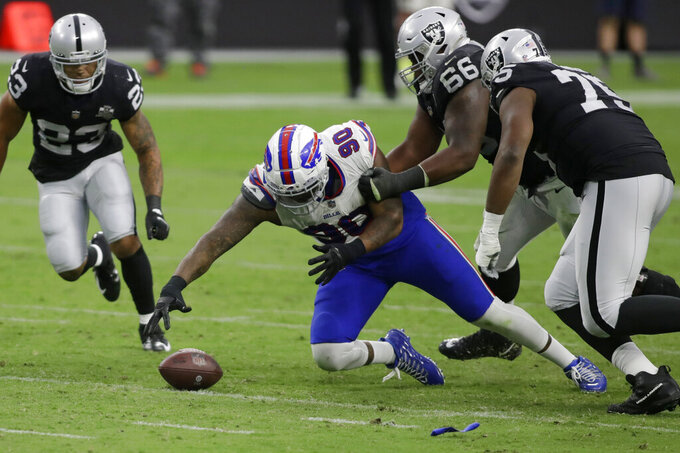 After committing just one turnover in their first two games of the season — both wins — the Raiders have committed five in their last two — both losses. A pair of costly fumbles and seven penalties, including one that negated a touchdown, contributed heavily to the Raiders’ 30-23 loss to the Buffalo Bills on Sunday.

“What’s killing us is ourself. ... That’s the frustrating part,” said Raiders quarterback Derek Carr, who has yet to throw an interception this season, but lost one of the two fumbles Sunday. “The things that are hurting us in these close games is not them, it’s us. That’s the hard part to swallow.”

Four defensive penalties by the Raiders on four separate drives ended with a total of 24 points for the Bills.

Early in the second quarter, Carr found Nelson Agholor deep for a 49-yard touchdown reception, but that play was nullified when Foster Moreau was lined up illegally.

“When you play against good teams, your margin is really tight,” Raiders veteran tight end Jason Witten said. “The last couple of weeks that’s been the case. You can’t turn the ball over. You can’t have penalties.”

Against New England in Week 3, the Raiders had three turnovers and six penalties.

Through four games, the Raiders have a minus-4 turnover differential.

Clinging to a touchdown lead, the Bills made the Raiders pay for a critical fumble in the fourth quarter, when Darren Waller fumbled in Buffalo territory. Josh Allen completed a 49-yard pass to Stefon Diggs on the next play, and Devin Singletary ran in from 2 yards out three plays later to give the Bills a two-score cushion with 11:17 left.

“We've got to get turnovers from our defense. That’s a big story here also — we’re not getting any turnovers,” Raiders coach Jon Gruden said. “When you’re in an obvious passing situation and you’re throwing the ball and they know you’re throwing the ball, you’re going to get every coverage and every stunt and every look known to man. And the great pass rushers, they salivate in those situations.

“The situation has a lot to do with it. We’re very predictable and one-dimensional in those times, but we've still got to clean it up. We’re playing a lot of different linemen. There’s a lot of things that have gone into that problem.”

The Raiders will try to clean things up before traveling to play defending Super Bowl champion Kansas City next Sunday in what will be their first division game of the season.

“We are in all these games," Carr said. "We have moved the ball up and down the field in these first four games. I’m sick of losing. I’m sick of working as hard as I do and as we do and going out there and losing.