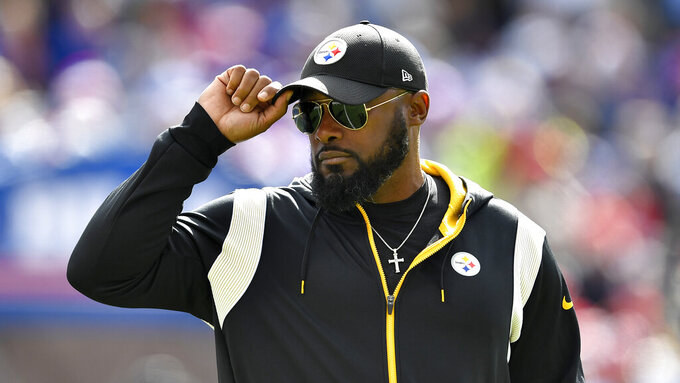 Pittsburgh Steelers head coach Mike Tomlin walks on the sideline during the first half of an NFL football game against the Buffalo Bills in Orchard Park, N.Y., Sunday, Oct. 9, 2022. (AP Photo/Adrian Kraus)

OPENING LINE: Eagles by 10, according to FanDuel Sportsbook.

TURNOVER DIFFERENTIAL: Steelers minus-2; Eagles plus-12.

EAGLES PLAYER TO WATCH: QB Jalen Hurts has won nine straight regular-season games, the longest active streak in the NFL. This season, Hurts has been giving defenses fits with his arm and his legs. Hurts has passed for 1,514 yards and six TDs and has run for 293 yards and six TDs while accumulating a 98.4 QB rating.

STEELERS PLAYER TO WATCH: Rookie first-round QB Kenny Pickett has started the past three games after replacing veteran Mitch Trubisky at halftime of the Steelers’ 24-20 loss to the Jets on Oct. 2. The No. 20 overall pick, Pickett has shown promise at times, but has experienced growing pains thus far. Ball security has been an issue. Pickett has thrown seven interceptions, including two in the final minutes of last Sunday night’s 16-10 defeat at Miami, in just 13 quarters. Only two quarterbacks in the NFL, Matt Ryan (nine) and Matthew Stafford (eight), have thrown more picks — and both of those quarterbacks have at least 98 more passes than Pickett. For the season, the University of Pittsburgh product has passed for 771 yards while completing 87 of 127 (68.5 percent) attempts with two touchdowns.

KEY MATCHUP: Eagles secondary vs. Pickett. With Darius Slay, C.J. Gardner-Johnson and James Bradberry, Philadelphia has one of the league’s top backfields. The trio has combined for eight interceptions, with Slay and Gardner-Johnson leading the team with three apiece. Philadelphia has forced a league-best 14 turnovers on defense (nine INTs, five fumble recoveries) while accumulating 46 points off turnovers, also tops in the NFL. Pickett will have his hands full trying to solve the Eagles’ secondary, especially while playing in a loud, hostile environment in Philadelphia. The Eagles defense has held opposing quarterbacks to a 66.0 passer rating, which also is tops in the NFL.

KEY INJURIES: Pittsburgh OLB T.J. Watt (left pectoral) is “highly unlikely” to play, coach Mike Tomlin said early in the week. The 2021 Defensive Player of the Year hasn’t played since getting injured in the Steelers’ 23-20 season-opening win at Cincinnati on Sept. 11. The availability of Steelers CB Levi Wallace (shoulder) is “in question,” Tomlin said. The coach sounded more optimistic about the game-day status of CB Josh Jackson (groin), who is expected to be limited in practice during the week. WR Calvin Austin III (foot), a rookie fourth-round pick who hasn’t seen action all season, would miss the remainder of the season if he isn’t activated off IR this week. Tomlin didn’t sound optimistic about Austin’s chances of seeing the field against the Eagles.

SERIES NOTES: The Eagles have won nine consecutive games over Pittsburgh in Philadelphia. The Steelers’ previous win in the City of Brotherly Love was a 20-14 victory on Oct. 24, 1965.

STATS AND STUFF: The Steelers have led the NFL in sacks in each of the past five seasons, but have amassed just 12 sacks this season and are tied for 22nd in the league. Last week against the Dolphins, Pittsburgh had zero sacks and just one hit on QB Tua Tagovailoa. ... Philadelphia is 6-0 for the third time in franchise history. The Eagles started 7-0 in 2004 when they finished 13-3 in the regular season before falling in the Super Bowl to the Patriots and began 6-0 in 1981, but dropped their first playoff game. ... Offseason free-agent signee Haason Reddick leads the Eagles with 4½ sacks, three of which have been strip-sacks.. ... Philadelphia RB Miles Sanders, a Pittsburgh native, has rushed for 485 yards and four TDs. ... WR George Pickens leads the Steelers with 338 receiving yards, just a yard in front of WR Diontae Johnson. ... The Steelers are minus-55 in point differential, having allowed 162 and scored 107. Philadelphia is plus-56 in the category with 161 points scored and 105 allowed. ... Pittsburgh’s secondary dropped four potential interceptions last week against Miami. ... Philadelphia WR A.J. Brown has a team-best total of 503 receiving yards. ... Pittsburgh is 5-8 in games against teams that are undefeated through six games or more.

FANTASY TIP: Eagles TE Dallas Goedert is one of Hurts’ most reliable playmakers, ranking third on the team with 357 passing yards. Goedert, though, has found the end zone just once this season. The Steelers likely will focus on stopping the run in the red zone, as the Eagles lead the NFL with 13 rushing TDs, which could free Goedert for a short touchdown reception.