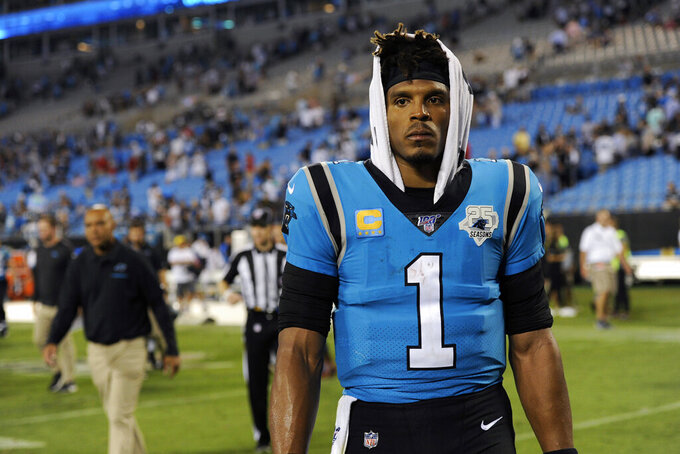 FILE - In this Sept. 13, 2019, file photo, Carolina Panthers quarterback Cam Newton (1) walks off the field following the Panthers 20-14 loss to the Tampa Bay Buccaneers in an NFL football game in Charlotte, N.C. The Panthers are parting ways with Cam Newton. Carolina general manager Marty Hurney said Tuesday, March 17, 2020, via Twitter the team is giving the 31-year-old quarterback permission to seek a trade _ although the former league MVP responded by saying he never requested one. (AP Photo/Mike McCarn, File)

ROCK HILL, S.C. (AP) — A county in South Carolina approved a deal loaded with tax breaks for the Carolina Panthers to move their headquarters and practice site.

The York County Council approved the deal in a 4-3 vote after listening to public comments during a virtual meeting Monday, news outlets reported. It follows a series of moves the state has made to attract the team’s headquarters. The Panthers will continue to play games in Charlotte, North Carolina.

The approved deal will give the Panthers relief from all property taxes in the City of Rock Hill for 20 to 25 years, according to the York County Council.

The team would pay lower-rate fees, instead of property taxes, and it will be redirected to pay for infrastructure at the site, the Herald of Rock Hill reported. The city would put all the revenue it would get from the team's fees to support the development, while the school district would return 75% and the county 65% for public infrastructure.

“We’re creating a foundation for tremendous growth,” York County Councilman Britt Blackwell said during the meeting. City Councilman William Roddey added that the hotels, restaurants and other attractions that could be built near the new headquarters will make Rock Hill and York County “a destination" for visitors.

Not everyone agreed with that analysis. Most of the public comments in the meeting wanted the approval to be pushed back, and they wanted a reassessment of the more than 200 acres of land the team will use.

“The majority of the people don’t understand the concept of this development, and what this is going to bring to the area,” Billy Dunlap, president of Visit York County, told the Herald of Rock Hill. “With everything that Rock Hill and York County has now from a tourism and economic development status, they’ve never seen anything like this.”

The Panthers will continue to play at Charlotte's Bank of America Stadium, where they have hosted games since 1996.

The move is not a major financial loss for Charlotte, as the city will still attract fans — and revenue — on game days and players will continue to pay North Carolina taxes because that is where they work. Players traditionally have resided in North Carolina, although some may consider relocating to South Carolina to be closer to the practice facility as a matter of convenience.

After South Carolina lawmakers approved the deal in May, a spokesman for North Carolina Senate leader Phil Berger said it’s his understanding North Carolina planned no incentives for a practice facility in his state.

“The state’s partnership with the Panthers has been a successful one for the past 25 years and we hope they will keep pounding in Charlotte for years to come,” Berger spokesman Bill D’Elia said in a statement at the time.

Panthers COO Mark Hart said the team’s relocation would bring athletic partnerships with local schools and other attractions to the area.