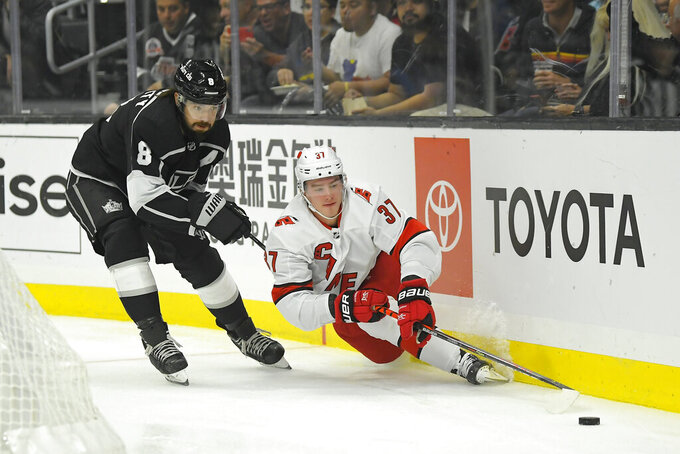 LOS ANGELES (AP) — The Carolina Hurricanes already have shown they can win in plenty of ways during the best start to a season in franchise history.

When the high-scoring Los Angeles Kings unexpectedly engaged them in a defensive grind, the Canes showed they can succeed there as well.

Petr Mrazek made 31 saves in his 19th career shutout, and the Hurricanes extended their torrid start with a 2-0 victory Tuesday night.

Martin Necas scored in the second period and Sebastian Aho tipped in an empty-net goal as the Canes rebounded from their first defeat and improved to 6-1-0 — a mark never reached even by the old Hartford Whalers — in the opener of a four-game road trip.

"We're finding ways to win, and we've done it different ways, which is good," Carolina captain Jordan Staal said. "A night like tonight wasn't a free-for-all, back-and-forth (game). It was a dig-in kind of game. We did a good job of sticking with that style. Yeah, it's a good start, but it's going to be a long season."

Carolina went ahead when Ryan Dzingel feathered a pass from behind the net to Necas, who scored his second goal of the season on a one-timer from the slot early in the second period. The 20-year-old Czech prospect has three career NHL goals.

"I saw a spot in the slot there, and Zinger found me perfectly," Necas said. "We're having fun. You're always having fun when you're playing good. We like to play together."

Mrazek made only a handful of tough saves after the first period, in which he stopped 17 shots.

Jack Campbell stopped 21 shots for the Kings, who were shut out after averaging four goals per game in their first five games this season.

"There wasn't a lot of space to make plays either way," McLellan said. "They capitalized on one of our mistakes. We failed to do that on a couple of theirs, but I thought it was a very evenly played game. That's a team that went to the Final Four last year, so they're a hard team to play against. They give you absolutely nothing as far as space goes."

Drew Doughty went down with an injury after getting boarded by Staal deep in the Hurricanes' end with 1:14 to play, although Doughty eventually skated off to the dressing room without much help.

"He's getting looked at," McLellan said. "Apparently he feels pretty good, so that's a good sign, and that's all I have for you right now."

Staal's hit didn't appear to be particularly violent, but it planted Doughty into the boards.

"Unfortunate play, obviously," Staal said. "I was skating alongside him. I thought he saw me, and just kind of tried to finish him, and obviously not in a great situation. I hope he's all right."

The Kings pulled Campbell but couldn't score on the ensuing 6-on-4 power play. Teuvo Teräväinen took the puck from Sean Walker and flung it toward the net, where it apparently glanced off Aho's skate on the way into an empty net with seven seconds to play.

Staal played in his 900th career game, joining Phil Kessel and Nicklas Backstrom as the members of the NHL draft class of 2006 to reach the mark.

NOTES: Los Angeles Chargers LB Thomas Davis dropped the ceremonial first puck alongside teammates Desmond King and Mike Williams. Davis spent the previous 14 seasons with the Carolina Panthers, earning three Pro Bowl selections. ... Brian Gibbons made his debut for the Hurricanes, who signed him in July. Carolina is the sixth NHL team for the 31-year-old center. ... Kings F Adrian Kempe needed stitches after getting hit in the face with a puck early in the game. He returned, but the Swede's play hasn't impressed McLellan this season. "Quite frankly, he's got to be way more productive than he's been," McLellan said.

Hurricanes: Visit the San Jose Sharks on Wednesday night on the second of three stops in California.

Kings: Host the Buffalo Sabres on Thursday night in the fourth of five home games in eight days.