Pettine, Mennenga won't be back after Packers' playoff loss 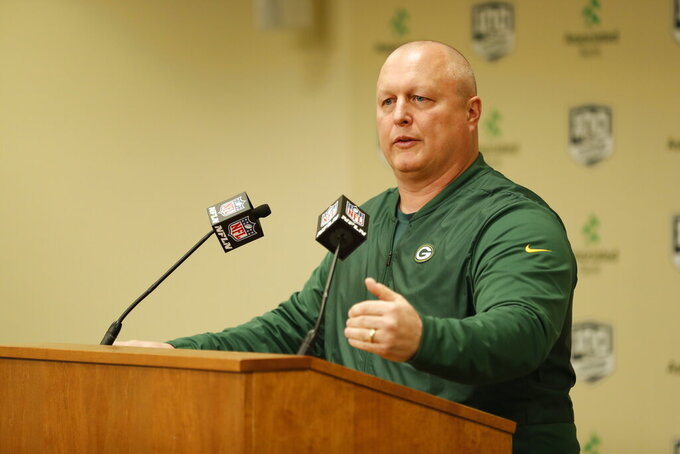 The Packers said in an announcement late Friday afternoon that Pettine would not be back next season. ESPN reported that Pettine's contract expired at the end of this season. The team also announced Mennenga had been dismissed.

Both departures were first reported by NFL Network.

The moves come after the Packers gave up a 39-yard touchdown pass from Tom Brady to Scotty Miller with 1 second left in the first half of a 31-26 NFC championship game loss to the Tampa Bay Buccaneers.

“It was man coverage, definitely not the right call for the situation,” LaFleur said after the game. “You can’t do stuff like that against a good football team and expect to win.”

LaFleur had chosen to keep Pettine after the Packers gave up 285 yards rushing in a 37-20 NFC championship game loss at San Francisco last season, continuing their struggles to slow down the run.

The Packers gave up 56 more points during the 2020 regular season than in 2019, but they improved in most other defensive areas.

The Packers intercepted three of Brady's passes and allowed only three points in the last 28½ minutes of the NFC championship game, but that was after they had allowed Brady and the Bucs to score 28 points in the first 31½ minutes.

“We want to thank Mike for his commitment to the Packers for the last three seasons,” LaFleur said Friday in a statement. “He was an important part of our success. As a first-time head coach, he was also an invaluable resource for us during our time together. We wish Mike, Megan, and the rest of their family the best moving forward.”

Pettine was a head coach with the Cleveland Browns in 2014-15.

Mennenga took over as the Packers’ special teams coordinator in 2019 after filling the same role at Vanderbilt in 2018. He was a special teams assistant with the Browns from 2011-17.

Green Bay dealt with a number of special teams breakdowns this season while playing much of the year without returner Tyler Ervin, who appeared in just eight games before going on injured reserve.

The Packers allowed Jacksonville’s Keelan Cole to score on a franchise-record 91-yard punt return and allowed Philadelphia’s Jalen Reagor to score on a 73-yard punt return. They gave up a blocked punt against Houston. Darrius Shepherd fumbled a kickoff return to set up a field goal in an overtime loss at Indianapolis. Tavon Austin fumbled a punt return at Chicago. A botched snap foiled an extra-point attempt in a playoff victory over the Los Angeles Rams.

“We appreciate Shawn for all that he has given to the organization and his contributions to our success over the past two seasons,” LaFleur said. “We wish all the best to him, Christie, and the rest of their family in the future.”