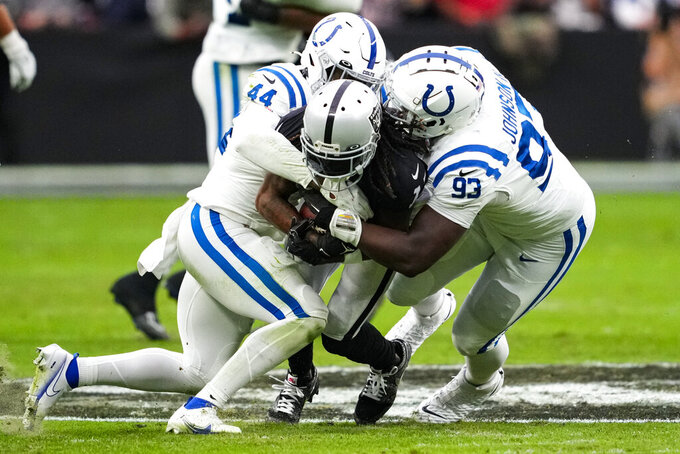 TURNOVER DIFFERENTIAL: Eagles plus-13; Colts minus-9.

EAGLES PLAYER TO WATCH: WR A.J. Brown. The 6-foot-1, 226-pound veteran is a mismatch for most cornerbacks as the Colts know after dealing with him four times over the past two seasons. In his previous game against Indy, he had 10 receptions, 155 yards and one TD. And after logging one pass for 7 yards Monday night, expect Brown to be motivated and targeted early and often.

COLTS PLAYER TO WATCH: QB Matt Ryan. The 37-year-old reclaimed his starting job last week and responded with his second turnover-free game in eight appearances this season. If he keeps it up Sunday, the one-time Philadelphia-area prep star could put Indy in position to win yet again in what could be his final start against his hometown team.

KEY MATCHUP: Philadelphia pass rush vs. Indy's pass protection. The Eagles have one of the NFL's top defenses, particularly against the pass. One reason is they rank fifth in the league with 29 sacks. Javon Hargrave (seven) and Hasson Reddick (6 1/2) have been the most disruptive. Indy's offensive line performed better last week, allowing just one sack and when Ryan had time, he was effective. In Ryan's previous seven starts, he took 24 sacks, 59 hits and had 12 turnovers.

KEY INJURIES: While Brown continues to deal with an ankle injury, the bigger loss will be starting TE Dallas Goedert (shoulder), who has been put on injured reserve. Goedert had 43 catches for 544 yards and three TDs. His replacements, Jack Stoll and Grant Calcaterra, have a combined five receptions for 89 yards and no scores. ... Indy again will be without three-time All-Pro LB Shaquille Leonard, who had back surgery Tuesday and is on injured reserve. It could be missing DE Kwity Paye, too, after he injured his ankle at Las Vegas. Pro Bowl DT DeForest Buckner sat out Wednesday's practice with a neck injury but is expected to play.

SERIES NOTES: Philadelphia has won the past three in the series after losing the previous four. ... Sunday's game is only the fourth time the Eagles have played a regular-season game in Indianapolis. ... Coach Nick Sirianni spent three seasons as Indy's offensive coordinator before taking the Philadelphia job. ... Former Eagles quarterback Nick Foles, who caught a touchdown pass while earning Super Bowl 52 MVP honors with Philadelphia, is a backup with the Colts.

STATS AND STUFF: The Eagles had an eight-game winning streak snapped Monday night and are one of two one-loss teams (Minnesota). ... Philadelphia has a league-high 20 takeaways and a league-low seven giveaways. ... Jalen Hurts is one of three NFL quarterbacks who has accounted for 20 or more TDs this season. Hurts has 21, Buffalo's Josh Allen has 24 and Kansas City's Patrick Mahomes has 26. ... Hurts also ranks second in yards per attempt (8.4). ... Brown is tied for fifth in the league with six TD catches. ... Hargrave is the Eagles first DT to have seven or more sacks in consecutive seasons since Corey Simon in 2000-01. Hargrave has had at least one sack in three straight games. ... C.J. Gardner-Johnson has a league-best six interceptions and is the first NFL safety since 2015 to have a pick in five straight games. ... After Indy snapped a three-game losing streak last weekend, interim coach Jeff Saturday tries to start his career at 2-0. ... The Colts are 2-2 at home this season and are 1 1/2 games out of playoff position in the AFC. ... Indy assistant coach Parks Frazier will be calling plays for just the second time in his career. ... Ryan needs 31 passes to surpass Hall of Famer Dan Marino (8,358) for No. 6 on the league's career list and one game-winning drive to tie Marino (47) for fifth all time. ... Colts RB Jonathan Taylor needs one 100-yard game to tie Lydell Mitchell (16) for third in franchise history and two TD runs to pass Hall of Famer Eric Dickerson (32) for No. 8 in franchise history. ... Indy's defense has limited opponents to a 33.6% conversion rate on third downs. ... Buckner and Grover Stewart have combined to make 95 tackles this season, the most by any DT combination in the league.

FANTASY TIP: The matchups and stats suggest Brown and Taylor could both be solid picks this week. But for those willing to take a chance or two, try Hurts against a defense that has struggled against mobile quarterbacks this season or Colts WR Parris Campbell who has played his best football over the past month.