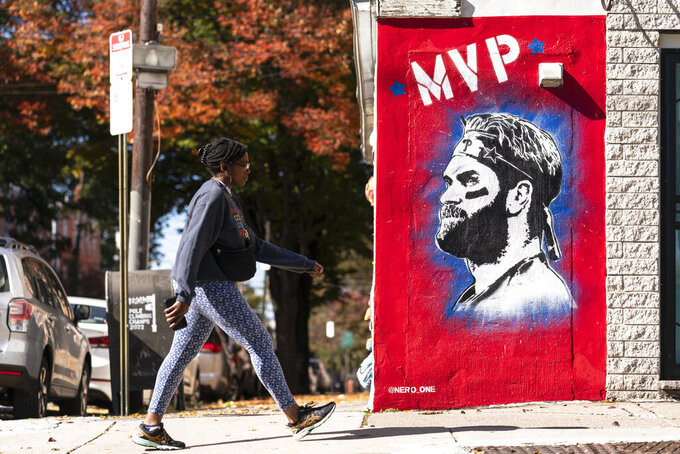 A person walks past a mural of Philadelphia Phillies designated hitter Bryce Harper, created by artist Nero, in Philadelphia, Thursday, Oct. 27, 2022. Game 1 of baseball's World Series between the Phillies and Houston Astros is Friday in Houston. (AP Photo/Matt Rourke)

Faster than Maverick could reach Mach 10, Teller had a change of plans: The Philadelphia Phillies — the team he grew up rooting for, including sitting with his dad near the left-field foul pole for Shane Victorino’s grand slam in the 2008 playoffs — had clinched an NL wild card.

Who needed Cabo when the promise of the South Philadelphia madhouse beckoned?

So off the couple went, and the actor best known for playing Rooster in “Top Gun: Maverick” became a fixture at home playoff games and had a sweet seat for the Game 5 clincher that sent the Phillies to the World Series.

Yeah, the win took his breath away.

“I’ve been coming to every playoffs forever,” Teller said on the field, the celebration roaring around him. “Now the seats are a little better.”

Oh yeah, seats! Teller has them and you have to be a Philly A-lister like Jason Kelce or Jay Wright — or one of the lucky, lottery-winning few — to snag a pair of World Series tickets for Games 3 and 4 and potentially Game 5 next week against the Houston Astros at Citizens Bank Park.

Phillies fever has gripped the city at a time of the year usually reserved for Eagles talk radio chatter.

Philly fans have proven they are willing to fork over big bucks for the chance to watch Bryce Harper stake Citizens Bank Park as his house and Kyle Schwarber launch Schwarbombs. More than 1 million fans entered a ticket lottery on the team website for the opportunity to purchase tickets. Only approximately 20,000 tickets were available to the public — total! — over the three games.

Much like a Rhys Hoskins’ at-bat worthy of a bat spike, the tickets were going, going, gone in record time.

“If we didn’t have our fans the last couple days or the last three weeks, we wouldn’t be where we are right now because home-field advantage is real in Philadelphia,” Harper said.

The Phillies are leading the charge of what — in Philly’s relatively dry sports championship history — are heady times to be a sports fan. The 6-0 Eagles are the last undefeated team in the NFL. The Philadelphia Union of the MLS host the Eastern Conference final on Sunday. Even the Flyers, picked to be among the NHL's worst teams, have a winning record. And, hey, Joel Embiid and the 76ers play here, too!

Flyers coach John Tortorella had just parked his car at the Wells Fargo Center ahead of last Friday night’s game right about the time the Phillies scored some runs in Game 3.

“It was shaking over where I was. That was pretty cool,” Tortorella said. “That’s what I love about being here.”

When the no-nonsense coach was asked hockey questions, he laughed and said, “We’re talking baseball! I want to talk about the World Series.”

The Eagles have noticed the packed houses and pure joy at each Phillies home game. Coach Nick Sirianni and general manager Howie Roseman have attended playoff games. Kelce, the heart of the Eagles, danced with the Phillie Phanatic during Game 3 of the NLCS, and the burly center then sent the crowd into a frenzy when he slammed a beer right there on the field.

“It’s a great time to be in the city of Philadelphia,” Kelce said Thursday. “I don’t know if that made it, I feel like the Phanatic moment was enough, but the beer was the icing on the cake.”

There’s plenty of cake, mostly the kind baked in the shape of the Phanatic’s head. So much cheap beer and other assorted booze has spilled inside the Phillies’ clubhouse, it could about rival the Schuylkill River. McGillin’s Olde Ale House, Philadelphia’s oldest bar, is pouring red beer in honor of the Phillies for the first time in its history.

With all that alcohol, it’s no wonder Philly police officers slather light poles with grease in an — often futile — attempt at slowing down drunken revelers from climbing after each big win.

If the usual slippery stuff doesn’t work, one adult entertainment company said it sent 10 drums of lube to help with the cause.

About the only thing more obscene are the World Series ticket prices on the secondary market. Standing-room only tickets for Game 3 started at $886 on Thursday, though, of course, the actual sale price could vary greatly. The cash flow continues for concessions: Aramark said Thursday the Phillies sold an average of 2,000 cheesesteaks, 2,531 souvenir sodas and 6,951 hot dogs per game this season.

Throw in the $16 it costs for October specials such as Red October Punch, and it’s no wonder spirits are high.

The good news, the Phillies have kept the bold type in the box scores and out of the police blotter.

“I really want to thank the residents and the fans in the city for their behavior last night,” Philadelphia Mayor Jim Kenney said Monday. “It was joyous. It was fun. City Hall was hopping. Frankford and Cottman was hopping. We had no problems, no issues, no arrests, maybe two arrests.”

When they’re not at the ballpark, fans are painting town the red — and green, and assorted colors needed to layer city walls with at least two Harper murals. And if a portrait of Harper with “MVP” painted above his head doesn’t seem larger than life, perhaps meeting the real deal does. Lucky Phillies fans were shocked when they spotted Harper this week shopping at a New Jersey location of Trader Joe’s.

It seems like a different universe, a different time from Philadelphia’s last world championship in 2008. Back then, fans waited impatiently for Victorino to occasionally update his blog for his inside look at the team. Harper, Hoskins, players’ wives and girlfriends now shoot real-time video for Instagram and other social media outlets that only tighten the bond between the team and their fans.

Make ’em feel like they are part of the team.

Even Teller does after the Phillies reeled off five straight postseason wins at home.