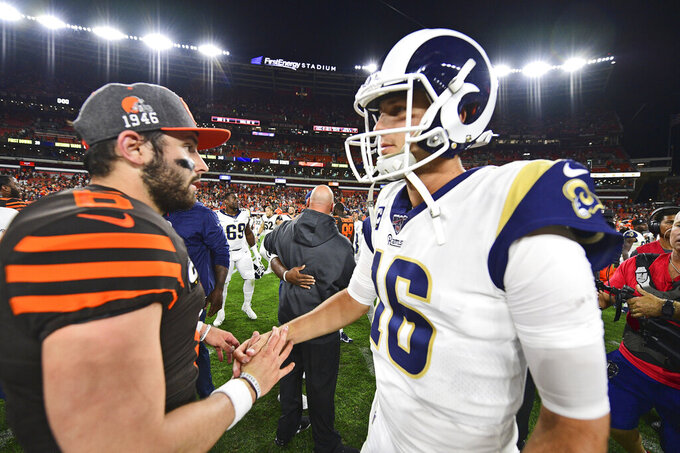 BEREA, Ohio (AP) — Baker Mayfield's getting picked off and picked upon.

Just three games into this second season, Cleveland's confident-and-cocky quarterback is being surrounded. He hasn't performed up to expectations — including his own — and Mayfield's all-around game is being harshly criticized by fans, media members and at least one opinionated former NFL coach.

After the Browns fell to 1-2 with a loss on Sunday night to the Los Angeles Rams, former Jets and Bills coach Rex Ryan, who now works as an analyst for ESPN, went as far as calling Mayfield "overrated as hell."

On Wednesday, Mayfield fired back.

"Whatever," he said, when asked if negative comments like Ryan's provide motivation. "In the wise words of (Cleveland coach) Freddie Kitchens, 'if you don't wear orange and brown you don't matter', and Rex Ryan doesn't have any colors right now for a reason. So, it's OK."

Ryan hasn't coached since he was fired in 2016 by Buffalo after going 15-16 in two seasons.

Earlier, Kitchens defended Mayfield by saying that Ryan was way off base in describing the former No. 1 overall pick as a "one-read quarterback."

"He's not in our building, he has no idea what we're doing," Kitchens said. "Is he a one-read quarterback? No, he's not. I mean, that's asinine to even say."

Ryan's assessment may have been severe, but there's no denying that Mayfield has had his share of struggles so far this season.

His completion rate has dropped from 63.8 percent in 13 games as a rookie starter to 56.9. He's thrown just three touchdown passes and five interceptions. At times, the 24-year-old has either held the ball too long waiting for receivers to get open or bailed too quickly from the pocket to improvise.

Mayfield grew defensive when asked if he's giving up on plays before he should.

"Did you take that one straight from the commentators or what?" he asked a reporter. "There was one play that I feel like I could stick in there. Other than that, here is the thing: people are going to commend when I extend the play and make a scramble play. And if I leave the pocket too early, they are going to harp on it.

"I couldn't really care less. I am going to do my job like I said and continue to improve."

While having his QB's back, Kitchens pointed out that Mayfield just started his 16th game — the equivalent of one full season. The 24-year-old and Cleveland's offense are experiencing some growing pains, but Kitchens is confident they'll subside.

Kitchens thought Mayfield improved Sunday night and believes that will be the trend going forward as he adjusts to new schemes.

Mayfield, too, is playing it cool but that doesn't mean he's pleased with his performance after three games. He's developed across the board since those early snaps as a rookie in 2018, but Mayfield remains his own toughest critic.

"For me, definitely not the start I wanted to have this year by any means but doing certain things better than I did early on last year," he said.

Part of his growth is dealing with critics. He's taking the heat, which Mayfield understands comes with the territory.

The Browns are an easy target right now, and that's not going to change until they start winning consistently. But until that happens, Mayfield doesn't mind being the one to take the blows and he said it's imperative for he and his teammates to worry only about improving.

Rex Ryan and others can talk. The Browns can't listen.

"It is something that you really have to be conscious of because you are surrounded by an environment where you hear a lot of things, stuff pops up on your phone and stuff is on the TV," he said. "It is just people talking. You just have to make a conscious decision to protect your locker room, take care of your guys and block out the negative stuff. When they are patting you on the back, to me that is even worse."