Pickett's path from Pitt to the Steelers a lengthy journey 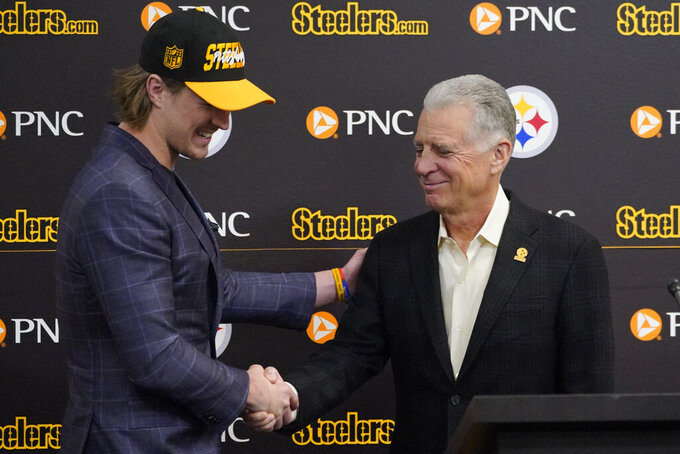 PITTSBURGH (AP) — Kenny Pickett did the math 16 months ago. It was pretty simple.

The University of Pittsburgh quarterback could have entered the 2021 draft and taken his chances, knowing he likely wouldn't have heard his name called until the third day.

It was tempting. At one point, it even seemed likely. Pickett even went through the whole Senior Day thing at Heinz Field in November 2020. Still, the sense of unfinished business nagged at him. The sense of what still could be, too.

More than the eye-popping numbers, more than the highlight-reel plays, Pickett knew if he could find a way to lead the Panthers out of the wilderness of 40ish years of middling play, everything else would sort of fall into place.

And suddenly there Pickett was on Friday afternoon, running on adrenaline after a whirlwind 18 or so hours in which the kid from New Jersey who envisioned himself being drafted in the first round as a 7-year-old stood next to Pittsburgh Steelers president Art Rooney II, a No. 1 jersey in his hand after t he franchise he worked next door for a half-decade made him the 20th overall pick in the 2022 draft — the only QB in the first round, too.

Pickett understands the pressure that comes with the territory. He knows he's being tasked with being the eventual heir to Ben Roethlisberger, who retired in January. He is well-versed in that winning is the only thing that truly matters for this franchise.

The 23-year-old is embracing all of it.

“This is where I wanted to be when I made that decision to come back,” Pickett said. “So I set out to do it.”

Pickett is the fourth quarterback the Steelers have drafted in the first round since the 1970 merger. Terry Bradshaw is in the Hall of Fame. Roethlisberger is likely to join him. As Rooney pointed out on Friday, Pickett broke nearly every Pitt passing record, including those held by Dan Marino, whom the Steelers bafflingly passed on in 1983.

Pickett insists he is ready for it all. The looming battle at training camp with Mitch Trubisky and Mason Rudolph for the right to be the starter in Week 1. The expectations of a fervid fanbase. If he wanted the easier road, he could have come out last year, been a mid-round pick and not had to shoulder any of it.

That's simply not the way he's wired. Pitt coach Pat Narduzzi realized that not long after Pickett arrived on campus in January 2017.

“He’s still mad I didn’t play him his freshman year every game,” said Narduzzi, who waited until the 2017 regular-season finale against then-unbeaten and second-ranked Miami to hand the offense to Pickett, who then proceeded to engineer a staggering upset.

Pickett's breakout season came last year when he led the Panthers to their first ACC title, was named the conference Player of the Year and finished third in the Heisman Trophy voting.

So don't expect Pickett to settle for settling in while Trubisky and Rudolph jockey for the right to follow The Guy. Pickett is already well-acquainted with Steelers offensive coordinator Matt Canada, who recruited Pickett in 2016 when he held the same position at Pitt.

Pickett expects to start diving into the playbook the second things start to slow down. And he expects to throw everything he has into walking out of the locker room in early September with the first string.

“That’s just his makeup," Narduzzi said. "You want a guy who wants to go play now.”

While Pickett is technically a rookie, he will turn 24 in June. General manager Kevin Colbert likened Pickett's 2021 to that of a first-year pro. As impressive as he was on the field while throwing for 42 touchdowns last fall, the way Pickett carried himself everywhere else stuck with Colbert and the rest of the front office.

Pickett will need to rely on that maturity as he prepares himself for what awaits. He can't help that he was the only quarterback taken on Thursday night, even if that means he'll serve as the de facto standard-bearer for Malik Willis and Matt Corrall and Desmond Ritter and all the other guys Pickett got to know over the last few months during the draft process.

He knows those guys will get chosen. Then the real work begins.

“It’s just all about what you do when you get here,” he said. “So that’s what I’m excited about.”

An excitement stemming from a belief that never wavered. Yes, it was weird listening to people on national television debate the size of his hands. All that is over. Now he can just pour himself into his work. It's the only way he knows how.

Pickett admits he is obsessed with the little things required to get better. A year ago, he was part of an incredibly small group who thought he'd be here. Now he is. Underestimate him at your own risk.

“There’s plenty of areas I can improve, so I don’t know what my ceiling will be,” he said. “You know, we'll have to find out in a few years.”