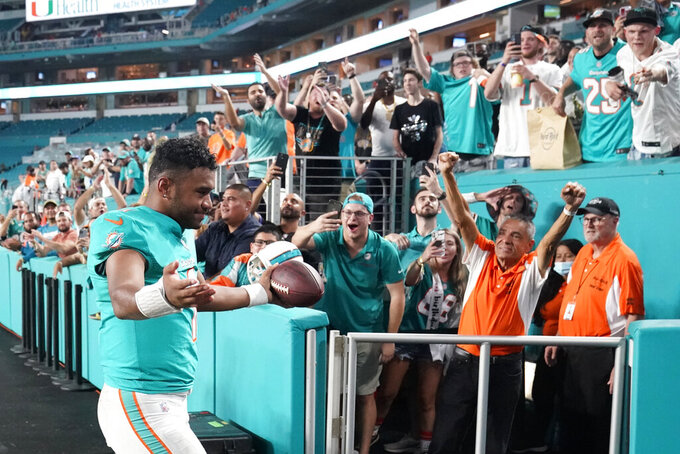 MIAMI GARDENS, Fla. (AP) — The Miami Dolphins, after wins, change the wrapping on some elevator doors to display the most iconic image of their most recent victory.

And somehow, it makes perfect sense. Robert Hunt’s touchdown that wasn’t in Thursday night’s 22-10 win over Baltimore is emblematic of what it takes for the Dolphins to win games right now — all-out effort is what will be required, with Hunt’s play certain to be the official example for the foreseeable future.

“That speaks to the type of player Rob is,” Dolphins coach Brian Flores said Friday. “I think we have a lot of players like that. Effort is not an issue. I think our guys give great effort, with desire to work together and play for one another. I think that showed in that play.”

The Dolphins (3-7) are off until Monday, the first mini-break for the team this season. They’re still well out of the playoff picture, but just found a way to win two games in a five-day span immediately following a seven-game losing streak.

And Hunt’s play — he wasn’t an eligible receiver but caught a screen pass that was intended for Myles Gaskin anyway, noting afterward that he “screwed up the whole play” — added a moment of much-needed joy to a season when happy times have been in short supply.

A 6-foot-6, 327-pound man got hit so hard by two Baltimore defenders that he flipped into the air, hitting the grass with the top of his helmet to begin the landing. A nd he still had the wherewithal to reach the ball over the goal line for a score that only would have counted if the officiating crew, the Ravens and those reviewing plays at the league office all simultaneously forgot the rules of football.

“I think he tried to be an athlete,” quarterback Tua Tagovailoa said. “Obviously, he tried to make a play. It’s illegal in the NFL, I think in college, in any football. You can’t do that, but props to him for trying to make a play.”

For the record, Hunt knew better than to get too excited about the play.

“It was a penalty,” Flores said.

One win doesn’t cure all the Dolphins’ ails, but Thursday showed what might be possible. Even with Tagovailoa not starting because he was hurt, then coming in when Jacoby Brissett got hurt, there were glimpses of what Miami expected to see more of in 2021.

The defense set the tone and wouldn’t stop harassing Baltimore quarterback Lamar Jackson until the end. The Dolphins hadn’t had a 50-yard play from their offense all season; they had two on Thursday, one pass from Brissett, one pass from Tagovailoa. Xavien Howard had a defensive touchdown, forcing a fumble then taking it in for a score.

Ways were found to win. And that’s what counts.

“It’s been a long time coming,” Hunt said. “I think we’ve been in a lot of games that I say I think we should have came out with, but it didn’t fall our way. Thank God the last two have, and we’re going to try to keep it rolling, this thing going in a positive direction.”

Resourcefulness. Look, five turnovers against Houston shouldn’t have led to a win. Scoring one offensive touchdown against Baltimore shouldn’t have given the Dolphins a victory, either. Somehow, they went 2-0 in those games. A week ago at this time, Miami was 1-7. A couple of ugly wins since are making plenty of things look better.

Health. The Dolphins didn’t start Tagovailoa in part, Flores said, because they didn’t want his finger to get worse. He then promptly smacked it on a Ravens defender early in his stint Thursday night. If Miami is going to make any sort of run, it needs to know who is playing quarterback.

Miami’s secondary stepped up big time. The Ravens knew what was coming, Jackson said, and still couldn’t handle a constant stream of blitzers. It was the first time in 52 regular-season games that the Ravens were held under 14 points.

To be clear, this wasn’t entirely his fault. But TE Mike Gesicki was the intended receiver seven times Thursday and made no catches. That was the first time a player was targeted so often but made no catches in an NFL game since Miami’s DeVante Parker had the same numbers on Sept. 15, 2019 in a 43-0 loss to New England.

The Dolphins are reasonably certain that Brissett wasn’t seriously injured. WR Will Fuller (finger) might return this coming week as well.

4 — The Dolphins’ next four games are against the New York Jets, Carolina, the New York Giants and then the Jets again. None of those teams currently possesses a winning record. A late-season surge isn’t outside the realm of reasonable possibility for Miami.

The Dolphins go back to work Monday, when they’ll start preparations in earnest for a Nov. 21 game at the Jets.