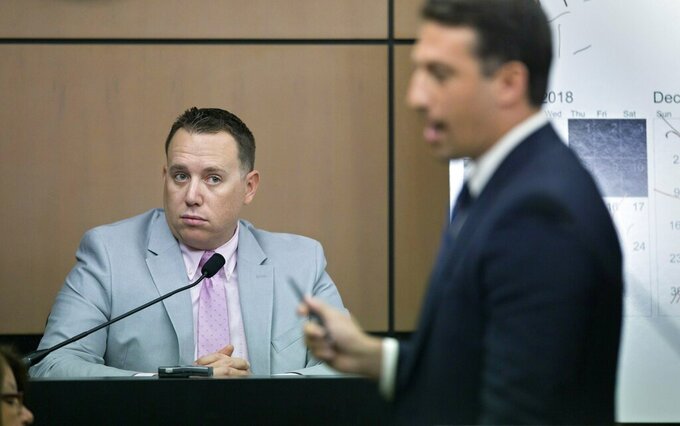 One day after prosecutors accused attorneys Alex Spiro and William Burck of lying in court, the duo fired back in court documents Wednesday, calling the accusation "scurrilous" and "baseless." Prosecutors Judith Arco, Greg Kridos and Craig Williams want Judge Leonard Hanser to find the pair in contempt of court; Burck and Spiro want the prosecutors sanctioned.

"The prosecutors have now gone beyond trampling the rights of Mr. Kraft and into sullying the reputations of defense counsel," Spiro and Burck wrote. The only explanation for the allegations, they said, is the prosecution's "bad-faith efforts to distract from its own misconduct and from fatal defects in its case."

The Palm Beach County State Attorney's Office declined comment. TV cameras did catch Arco last week using an obscenity under her breath to describe Spiro. That happened during a hearing over a request from Kraft's attorneys to suppress video secretly recorded by Jupiter police. The video allegedly shows Kraft twice paying for sex at the Orchids of Asia Day Spa in January.

Kraft, 77 and worth $6 billion, is one of 25 men charged with paying between about $50 and $100 for sex at the spa. The owner and some employees have been charged with felonies. Kraft has pleaded not guilty but issued a public apology for his actions.

Neither the attorneys for the prosecution nor those for the defense typically handle second-degree misdemeanors at this stage of their careers. Arco, Kridos and Williams usually handle major felony prosecutions. Burck represented former White House Counsel Don McGahn during special counsel Robert Mueller's investigation. Spiro represents Jay-Z, Mick Jagger and other celebrities in various matters.

The current fight is mostly over Spiro's questioning, during the suppression hearing, of Jupiter patrol officer Scott Kimbark, who pulled over Kraft's chauffer after one of the spa visits to uncover his passenger's identity.

As part of their undercover operation, Jupiter detectives watched live video of customers inside the spa. If they saw a customer have sex with an employee, they would relay that information to officers in the parking lot and nearby. They would follow the customer until he allegedly committed a traffic violation and then stop him, getting his identification so he could be charged later with soliciting a prostitute. The customers were not told at the time that they had been seen inside the spa.

Spiro asked Kimbark whether he had told other officers that to justify pulling over a customer who left shortly before Kraft he would "make some (expletive) up." Kimbark said he didn't remember saying that and didn't think he would. Spiro asked that question or a variation of it three more times.

Prosecutors said Spiro knew Kimbark never used that language or said he would concoct a reason to stop the driver. They said the traffic stop was legitimate, but that in order to preserve the integrity of their undercover operation, Kimbark said he would disguise where the infraction happened if asked. They said Spiro and Burck sullied Kimbark's reputation by implying he would lie to justify a stop.

Spiro and Burck wrote in Wednesday's rebuttal that Spiro's questions accurately reflected Kimbark's actions and were based on the recollections of the other customer's attorney, who had seen the officer's body camera video.

Prosecutors also accused Spiro of trying to intimidate Kimbark during a lunch break, allegedly telling the officer he had video of Kimbark saying "stupid" things. Spiro and Burck wrote that Arco and other police officers witnessed Spiro's conversation with Kimbark, but no one raised any objections to Hanser that day.

"Far from being threatening in tone, the atmosphere in the hallway was amiable and light hearted ... to the point that Officer Kimbark even joked he would like to have a job working for the defense," the pair wrote.

Hanser has not yet decided whether he will suppress the video. No matter how he decides, his ruling will likely be appealed.