Pivotal game for Colts, Raiders could have playoff impact 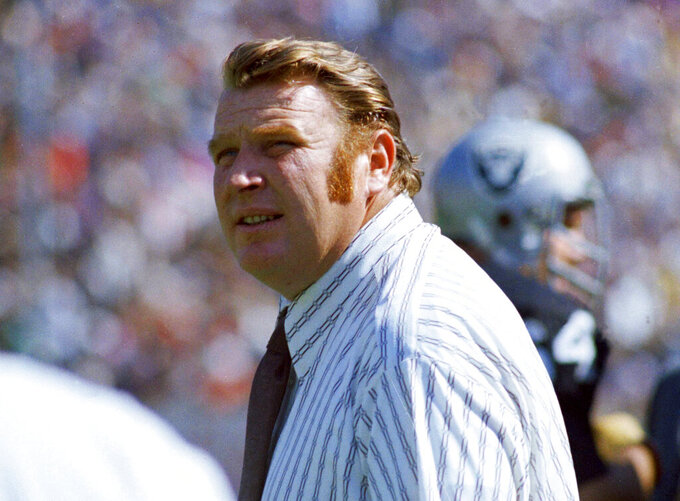 FILE - Oakland Raiders coach John Madden stands on the sideline during an NFL football game in October 1978. Madden, the Hall of Fame coach turned broadcaster whose exuberant calls combined with simple explanations provided a weekly soundtrack to NFL games for three decades, died Tuesday morning, Dec. 28, 2021, the league said. He was 85. The NFL said he died unexpectedly and did not detail a cause. (AP Photo, File)

BETTING LINE: Colts by 6 1/2, according to FanDuel SportsBook.

TURNOVER DIFFERENTIAL: Raiders minus-9; Colts plus-14.

RAIDERS PLAYER TO WATCH: Josh Jacobs. The third-year running back became the first Raiders player to top 100 yards in the second half since Rashad Jennings in 2013. After finishing with 27 carries and a career-high tying 129 yards, everyone wants to see what he can do for an encore to his first 100-yard game this season.

COLTS PLAYER TO WATCH: Carson Wentz. Indy's starting quarterback delivered a big game in last week's win at Arizona but went on the reserve/COVID-19 list Tuesday. Wentz was activated Saturday but must test negative on Sunday as the league's revised protocols gavee Wentz a chance to play this weekend. If he isn't cleared, rookie Sam Ehlinger will make his first start with an adjusted game plan.

KEY INJURIES: The Raiders hope to get TE Darren Waller back after missing the previous four games because of knee and back injuries. Las Vegas had five starters on the reserve/COVID-19 list — CB Casey Hayward, LB Denzel Perryman, CB Brandon Facyson, WR Bryan Edwards, and S Roderic Teamer. ... The revised COVID-19 protocols could help Indy get most, or all, of its players back Sunday. Five players returned to practice Wednesday and more, including LB Darius Leonard, are expected this week. Starting center Ryan Kelly is expected to return after missing three straight games. Reich won't know about LT Eric Fisher (knee, toe, pectoral muscle), TE Jack Doyle (knee and ankle) or S Andrew Sendejo (concussion protocol) until later this week.

SERIES NOTES: Indianapolis has won six of the last eight but road teams have won three in a row. ... The most memorable matchup was Dec. 24, 1977 when the Oakland Raiders beat the Colts 37-31 in Baltimore in double overtime. ... Sunday will be the first Raiders game since Hall of Famer John Madden died Tuesday. Madden won 103 games in 10 years as the coach and led the Raiders to the first of three Super Bowl titles in January 1977.

STATS AND STUFF: The Raiders can clinch their second playoff berth in 19 seasons by winning their final two games. ... Las Vegas has won two straight overall and two of its last three road games. ... It also has scored 17 points or fewer in four straight games and hopes to avoid matching the 2012 team, which last did it five times in a row during one season. ... The Raiders won back-to-back games with 17 points or fewer for the first time since 1991. ... Raiders QB Derek Carr has 17 turnovers this season, matching his career worst. ... WR Hunter Renfrow has 92 catches, tied for No. 4 in franchise history behind Waller (107 in 2020), Tim Brown (104 in 1997) and Todd Christensen (95 in 1986). Renfrow needs three catches to become the seventh player since the merger drafted in the fifth round or later, or undrafted, with 200 catches and 2,000 yards receiving in his first three seasons. ... The Raiders allowed eight first downs last week, the franchise's second fewest in 25 seasons. ... Las Vegas has a league-high 17 giveaways over the last eight weeks and is tied for a league-low with four takeaways in that span. It also has produced just one offensive play of 20 or more yards over the last three weeks. ... Indianapolis can clinch its third playoff berth in Reich's four seasons with a victory. The Colts have won six of seven and eight of 10 to overcome a 1-4 start. ... Taylor needs 38 yards from scrimmage to become the fourth Colts player with 2,000 in one season, 84 yards rushing to break Edgerrin James' single-season franchise record (1,704) and one 100-yard game to tie James (10) for the most by a Colts player in one season. Taylor's next TD also will tie Lenny Moore's franchise mark for the most in one season (20 in 1964). ... WR Michael Pittman Jr. needs 29 yards receiving for his first 1,000-yard season. ... T.Y. Hilton has moved within three catches of tying Hall of Famer Raymond Berry for No. 3 in Colts history (631). ... With 25 TD passes and six interceptions, Wentz is on pace for his fourth season with 20 or more TD passes and 10 or fewer interceptions since 2017. ... Indy's 31 takeaways are nine short of this season's goal but the Colts still lead the league in points off turnovers (122).

FANTASY TIP: Indy defense. Taylor is a tempting pick, as usual, especially against a defense ranked No. 19 against the run. But Carr and the Raiders have struggled mightily to protect the ball, especially recently. Expect the Colts to be hungry for takeaways after the short-handed unit forced none last week.