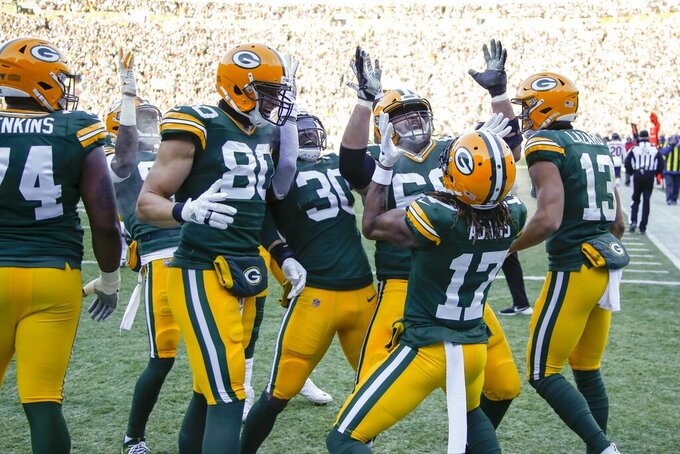 Green Bay Packers' Davante Adams celebrates his touchdown catch with teammates during the first half of an NFL football game against the Chicago Bears Sunday, Dec. 15, 2019, in Green Bay, Wis. (AP Photo/Matt Ludtke)

After completing the regular-season sweep of the longtime-rival Chicago Bears and having the Dallas Cowboys make easy work of the Los Angeles Rams on Sunday, the Packers clinched a playoff berth.

It's the first time in three years that Green Bay (11-3) will play postseason football.

“Well, obviously we're excited to be in, but that's nowhere near our standard and our expectations,” wide receiver Davante Adams said Monday. “We don't leave it just there. We want to win championships here and it's been that way for a long time.”

First-year coach Matt LaFleur said the goal is and has always been winning the NFC North.

“It's a good accomplishment," he said on clinching a playoff spot. “That was not our goal, though. Our goal was to win our division and that's still out there in front of us, so there's still a lot of work left to be done.”

On the Packers' three scoring drives Sunday, the ball touched the hands of Adams or Aaron Jones on nine of 14 plays. Two of the other five plays were incompletions intended for Adams. The other three were a season-long 17-yard run by Aaron Rodgers, a 49-yard pass to Jake Kumerow and a 4-yard completion to Allen Lazard. Moral of the story: Getting the ball to Adams and Jones typically translates to successful offense.

“I think we’re going to have to find ways to get them the ball and move them around,” Rodgers said of Jones and Adams after the 21-13 win. “I think what Matt did today was great, moving Davante around. We had a number of snaps with him in the slot. And he was playing both Z and X. We’re going to have to do that. We had Aaron split out a few times, didn’t really target him when he was split out at receiver, but the more we can move him around, it just gives the defense more things to worry about, and he’s a dangerous runner for us."

Offensively, very little is working outside of Adams and Jones, which could be a problem in the playoffs if teams figure out how to scheme those two out of LaFleur's offensive game plan.

While Jones is averaging 5.4 yards per touch, Jones' backup, Jamaal Williams, is averaging 4.8 yards on far fewer opportunities. Meanwhile, Adams has reestablished himself as one of the game's top wideouts since returning from a turf toe injury. Adams has four touchdowns in the last four weeks after being shut out of the end zone in his first six outings this season. Adams' two prominent backups, Geronimo Allison and Marquez Valdes-Scantling, each have been relative no-shows for several weeks now. More on that in a bit.

Kenny Clark. The fourth-year defensive tackle has been on an absolute tear of late. Clark tied his single-game career high with two sacks Sunday, giving him 3 1/2 in the last two games and five for the season. Clark had gone 10 straight starts without bringing down the quarterback.

“Kenny's been all over the place,” LaFleur said. “Really being disruptive in both the run game and the pass game. He's been a major force.”

Valdes-Scantling. Rodgers went deep to the second-year receiver on a go route on the Packers' first offensive play of the game Sunday. Rodgers threw a strike and said after the game Valdes-Scantling had an opportunity to make the grab. Valdes-Scantling didn't. He dropped what likely would have resulted in a 70-yard touchdown.

“I think he just misjudged the ball a little bit,” wide receivers coach Alvis Whitted said. “Again, another teachable moment. Watch the tape, learn from it, grow from it.”

Valdes-Scantling played all of seven snaps, a season low for the 6-foot-4 speedster. His production has plummeted and now he can't even get on the field.

“He's a young player," Whitted said. "He's continuing to learn every day. He's actually having some really good practices. We have the utmost confidence in M.V.S. He's just going to keep progressing and keep working. While that's happening, other guys are continuing to progress as well.”

The Packers escaped Sunday's win without any serious injuries and appear to be primed to make a healthy push through the final two weeks of the regular season.

Green Bay will travel to Minnesota to face the Vikings next week for its first “Monday Night Football" game at Minnesota since 2009. The division crown will be on the line.

“We can't just have this attitude like, ‘We made the playoffs, we’re good,'" center Corey Linsley said. "I don't think anybody in this building has that attitude. We all know what it means to get at least a (playoff) game in Lambeau and potentially, if things work out our way, getting two games, having the road come through Lambeau. It's huge. There's a lot at stake.”