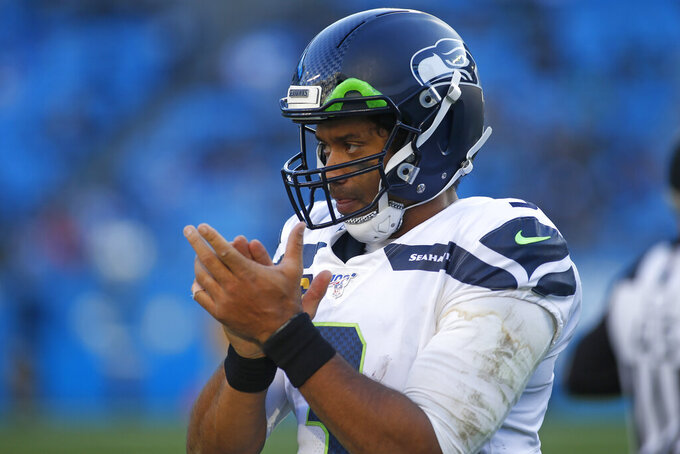 SEATTLE (AP) — With two games left in the regular season, the Seattle Seahawks are bound for the playoffs for the eighth time in Pete Carroll’s 10 seasons in charge.

Yet the Seahawks are in an unusual spot because this week’s matchup with Arizona could have major significance and be completely meaningless at the same time.

In the race to be the No. 1 seed in the NFC, it’s important. Seattle (11-3) currently holds the top spot and will be closely watching what happens with New Orleans and Green Bay. But being the No. 1 seed means winning the NFC West and that’s a title that won’t be decided until next week when the Seahawks host San Francisco in the season finale.

However it all plays out, the Seahawks know two wins will at the very least give them a first-round bye in the postseason. And based on how the year has gone with 10 of Seattle’s 11 wins being decided by one score, this week will probably be close and a bit nervy for fans.

“I think it’s fun. If you blow a team out you have to sit on the sideline, that’s not fun,” Seattle linebacker Bobby Wagner said. “When it comes down to the last second, it’s fun. You stay engaged, that’s where you get your confidence, you grow your confidence as you get to the end of the season and get to the playoff run.”

Seattle’s one “blowout” victory this season came in Week 4 in a 27-10 win over the Cardinals. It’s been a struggle for Arizona (4-9-1) in Kliff Kingsbury’s first season, but it did snap a six-game losing streak last week with an impressive rout of Cleveland.

The Cardinals had 445 yards — second most this season — but it was a balanced attack and not completely on the shoulders of rookie quarterback Kyler Murray. While Murray did his part running and throwing, Arizona got 137 yards rushing and four touchdowns from Kenyan Drake. The Cardinals rushed for 226 yards and will likely need a similar performance to hang around with the Seahawks.

“It’s definitely been a work in progress,” Kingsbury said. “Playing a lot of guys that have been thrown into the fire. I like how they responded for the most part.”

At one point in last week’s 30-24 win over Carolina, the Seahawks were without six defensive starters. Seattle had built a big enough lead to withstand the losses, but it wasn’t easy for Carroll to see his younger players making some inexperienced mistakes and being carved up in the fourth quarter as the Panthers tried to rally. Carroll’s hope is that the experience should help those younger players when they’re called upon again. That could be this week with the status of Jadeveon Clowney, Qunadre Diggs, Ziggy Ansah, Mychal Kendricks and Shaquill Griffin all in question.

Carroll said it was reminiscent of when he was an assistant coach with the 49ers and George Seifert wanted young guys playing in any game that had turned into a blowout.

“We’d play one coverage and we’d play all the youngest guys because we were ahead by a lot in those days in San Francisco,” Carroll said. “It used to be so painful to just watch them peck away at you. It kind of felt like that. It was great for those guys. It was great for them to be out there.”

Drake will try to build on last weekend’s huge game when he ran for a career high in yards and his four touchdowns were the most for a Cardinals player since 1993. Drake is part of a surprisingly solid run game. The Cardinals rank 14th in the league with 119 yards per game. Kingsbury has the reputation of a pass-first coach, but that hasn’t been the case this season, especially in games that the Cardinals have played well.

“If you look back to 2012, we led the SEC in rushing. Just remember that. One really good year,” Kingsbury said of his time at Texas A&M as an assistant. “Whatever it takes to score and win games, that’s the bottom line. I think right now, when we can stay on schedule and have a healthy mix, we’re playing at a pretty high level offensively.

Chris Carson is fourth in the NFL in rushing and yet it feels as if his season is being overlooked. Carson posted yet another 100-yard game last week, rushing for a season-best 133 yards and two touchdowns in the win over Carolina. It was his sixth 100-yard game of the season and he has 1,190 yards with two games remaining.

Carson’s first 100-yard game of the season came in Week 4 against the Cardinals when he had 104 yards on 22 carries.

It’s been a rough season for Arizona’s defense, which has given up the most passing yards and total yards in the NFL.

That makes it somewhat surprising that the Cardinals’ two Pro Bowl selections — linebacker Chandler Jones and safety Budda Baker — came from the defensive side of the ball.

Jones is second in the NFL with 15 sacks while Baker is second on the team with 125 tackles, including 92 solo tackles.

“It’s the ultimate sign of respect,” Kingsbury said. “We’ve had our ups and downs on defense, there’s no doubt, but to have two guys recognized as starters on a defense that statistically isn’t where we want it to be, is pretty phenomenal.