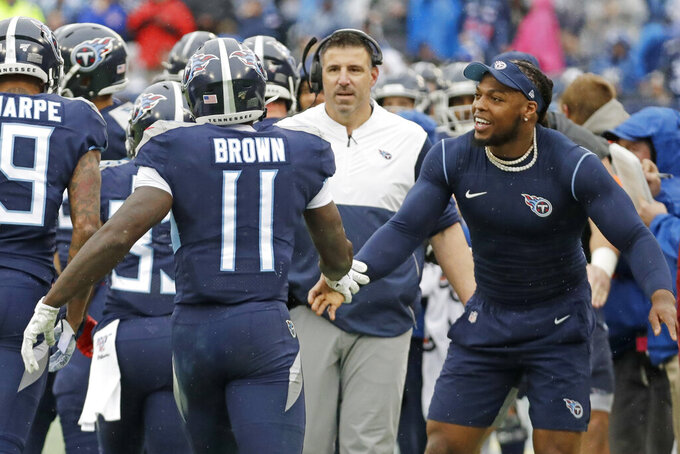 Tennessee Titans wide receiver A.J. Brown (11) is congratulated by running back Derrick Henry, right, after Brown scored a touchdown on a 49-yard run against the New Orleans Saints in the first half of an NFL football game Sunday, Dec. 22, 2019, in Nashville, Tenn. (AP Photo/James Kenney)

NASHVILLE, Tenn. (AP) — The Tennessee Titans know exactly what they must do to earn the first playoff berth of coach Mike Vrabel's tenure and only the second in 11 years for this franchise.

Beat the Texans on Sunday in Houston.

“The focus and the mentality is now that we’re playing playoff games,” Vrabel said Monday. “When you win ... in the playoffs you go find another game and when you lose your season's over. So that’s really the mindset that we have to take and the approach that we have to take.”

The Titans (8-7) have the simplest scenario to earn the AFC's sixth playoff spot as the second wild card thanks to Pittsburgh's loss to the Jets despite t heir own 38-28 loss to New Orleans.

First, the Titans have to clean up some things Tuesday before taking Wednesday off for Christmas.

They gave up five sacks to the Saints and were flagged six times for 56 yards. Tennessee gave up more sacks by halftime than the Titans had allowed in the previous two games combined. They hadn't had this many penalties in nearly a month.

Even coming off the loss, the Titans hope to be healthier in Houston after resting Pro Bowl running back Derrick Henry against New Orleans. He was downgraded after Houston clinched the AFC South with a win Saturday in Tampa Bay, and the Titans deactivated Henry on Sunday.

Henry ran for 86 yards Dec. 15 in a 24-21 loss to the Texans in Nashville, obviously limited by a sore left hamstring.

“Hopefully another week of rest will get him back close to 100 percent, and he’ll be ready to go on Sunday,” quarterback Ryan Tannehill said.

The offense managed to click well enough even without Henry to outgain the prolific Saints 397-377 in total offense. The Titans even found creative ways to run for 149 yards, averaging 5.7 yards a carry. Ryan Tannehill is back on top of the NFL with a 116.5 passer rating and also leads the league averaging 9.56 yards gained per attempt.

The defense carried Tennessee much of this season as one of NFL's stingiest units to score against. Injuries have taken a toll, and the Titans gave up a season-high 38 points in the loss to New Orleans.

Wide receiver Tajae Sharpe. The four-year veteran turned in his best game this season with a team-high five catches for 69 yards and two touchdowns. The Titans need Sharpe with Adam Humphries having missed three straight games with an injured ankle.

Left tackle Taylor Lewan. Tannehill was sacked five times, and the lineman who made the NFL's highest-paid left tackle last year struggled. He was beaten easily on a third-and-2 late in the first half where Dalyn Dawkins was tackled for a 5-yard loss with what Lewan called uncharacteristic miscues. Lewan said center Ben Jones said one thing and he heard another.

“Those are things I definitely need to tighten up and figure out and make sure I take responsibility for those things,” Lewan said after the game. “Definitely wasn't my best game so I need to go in and work my a— off this week."

Wide receivers Corey Davis and Kalif Raymond both are in the concussion protocol. Davis went to the locker room after a sideline catch attempt with 14 minutes left. Raymond was hit in the head by Saints rookie safety C.J. Gardner-Johnson as he made a 23-yard catch with 4:23 left.

“The first time I saw it I saw a defenseless receiver get hit in the head or neck area,” Vrabel said of the hit to Raymond. “Again, it's what I saw the first time and third time and the fifth time.”

The Titans added a pair of receivers Monday afternoon, bringing back Darius Jennings and promoting Rashard Davis from the practice squad. They waived linebacker Nigel Harris and running back Dawkins to make space.

1 — A team that started 2-4 and missed the playoffs last season by losing the regular-season finale needs one win to earn a second playoff berth in three seasons.