Plenty of blame to go around following 49ers' 1st loss 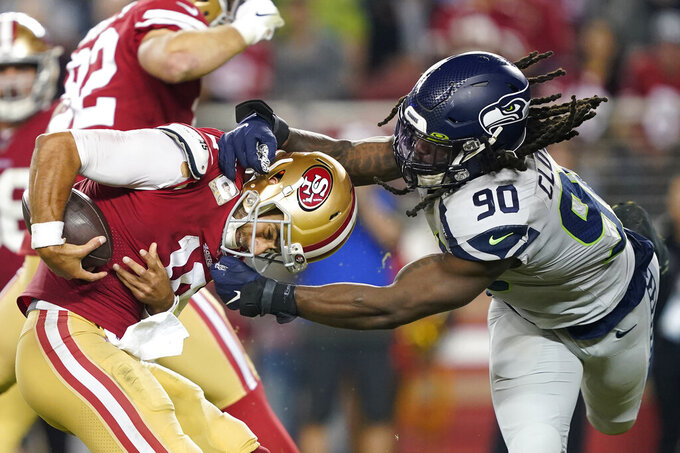 SANTA CLARA, Calif. (AP) — There were plenty of culprits when it came down to the end of San Francisco's first loss of the season.

There were the several dropped passes by the receivers, some poor decision-making and ball security from Jimmy Garoppolo, a missed field goal by a fill-in kicker, questionable play calls from coach Kyle Shanahan and a defense that couldn't contain Russell Wilson when it mattered most.

Add it all up and the 49ers (8-1) are dealing with defeat for the first time in 2019 after falling to NFC West rival Seattle 27-24 in a thrilling overtime game Monday night.

"You treat both the same, success and failure, because neither one of them are fatal. It's a learning experience," cornerback Richard Sherman said. "At the end of the day, it's a good learning lesson for us. Guys battled, there were a ton of mistakes that guys made but then we made a ton of huge plays to give us a chance."

Despite turning the ball over three times and struggling to generate any consistent offense after scoring 10 points on the first two drives, the Niners still were in position to win it in overtime after Dre Greenlaw intercepted a pass from Russell Wilson near the goal line.

But Chase McLaughlin missed badly to the left on a 47-yard field-goal try after making all three in regulation in his first game with San Francisco in place of the injured Robbie Gould.

San Francisco got one more chance on offense but Garoppolo threw three straight incompletions, including one that was dropped by Dante Pettis, burning only 14 seconds to leave Wilson time for the game-winning rally.

He scrambled 18 yards on a third-and-3 as the Niners got out of their rush lanes and then Jason Myers' field goal ended it.

The defense. The 49ers stingy defense faced some doubters despite the success in the first half of the season because San Francisco hadn't faced many of the league's top quarterbacks. But the group stepped up to the challenge against Wilson and the Seahawks. San Francisco had five sacks, held Seattle to a season-low 4.6 yards per play and gave up only one drive that went longer than 50 yards. The Seahawks scored one defensive touchdown and got their other two TDs after turnovers on drives that went a combined 40 yards.

The passing game. Garoppolo followed up his best passing game of the season with his worst as he missed the presence of his favorite two targets in Kittle and Emmanuel Sanders, who left in the first quarter with injured ribs. Garoppolo's 5.4 yards per attempt were his lowest total in 19 career starts and his five sacks behind a line that got starting tackles Joe Staley and Mike McGlinchey back from injuries were a season high. Garoppolo was hurt by several drops but also bailed out by a few by Seattle defenders on passes that should have been intercepted. He also lost two fumbles on sacks, giving him 12 turnovers on the season.

"I think I could throw the ball better, we could catch it better," Garoppolo said. "I think it's just a little bit of everything. There's not one specific thing that sticks out, but it's a bit of a reality check for us."

LB Fred Warner. With Kwon Alexander out for the season, Warner stepped up his play at middle linebacker. Warner had 10 tackles, the first two sacks of his career, one forced fumble and a pass defensed.

WRs Marquise Goodwin and Pettis. The Niners gave Goodwin an $18.85 million, three-year contract extension in 2018 and traded up to draft Pettis in the second round. Neither is making a big impact this season with a combined 22 catches. They were both shut out against the Seahawks with both failing to catch any of their three targets, including Pettis' drop in overtime.

Sanders will be day to day with his rib injury. ... Staley broke his finger in his first game back and could need surgery that would sideline him for a couple of more weeks. ... DL Ronald Blair is out for the season after tearing his ACL. ... RB Matt Breida is day to day with an ankle injury. ... LB Azeez Al-Shaair is in the concussion protocol. ... DL D.J. Jones will miss at least a week with a groin injury. ... Kittle (knee, ankle), Gould (quadriceps) and CB Ahkello Witherspoon (foot, quadriceps) all could return this week.

3 for 18. Garoppolo struggled to get the ball downfield, in part because of some drops from his receivers. He finished 3 for 18 for 59 yards and one interception on passes that traveled at least 10 yards downfield, according to NFL NextGen stats.

The 49ers host the Cardinals on Sunday in the second game of a three-game homestand.