Police: Ravens' Thomas threatened by wife with gun in Texas 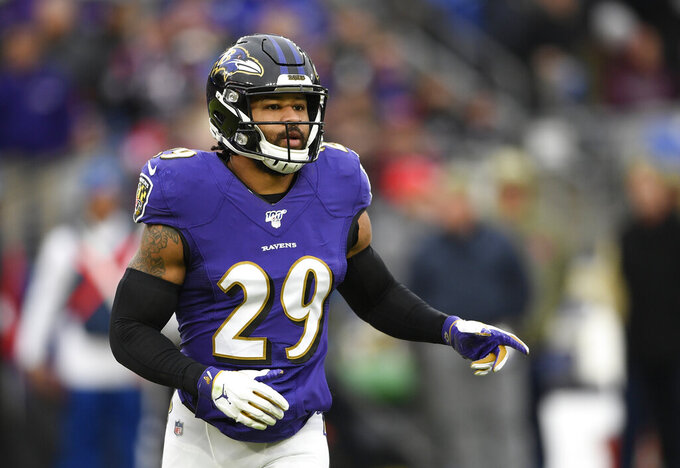 FILE - In this Nov. 17, 2019, file photo, Baltimore Ravens free safety Earl Thomas waits for a play during the second half of the team's NFL football game against the Houston Texans in Baltimore. The lawyer for the wife of Baltimore Ravens safety Earl Thomas said she is being subjected to an “unfounded ongoing investigation" by Texas police after she allegedly pointed a gun at her husband's head upon finding him in bed with another woman last month. (AP Photo/Nick Wass, File)

BALTIMORE (AP) — The lawyer for the wife of Baltimore Ravens safety Earl Thomas said she is being subjected to an “unfounded ongoing investigation" by Texas police after she allegedly pointed a loaded gun at her husband's head upon finding him in bed with another woman last month.

According to a police affidavit, Nina Thomas tracked down her husband at a short-term rental home in Austin in the early morning hours of April 13 and found him and his brother, Seth, in bed with two women.

The affidavit says Nina Thomas admitted to pointing the pistol at Earl Thomas' head “with the intent to scare him." She had taken the magazine out of the gun and disengaged the safety, but police noted “she was unaware the gun had a round in the chamber."

Nina Thomas struck Earl Thomas repeatedly with her free hand before her husband eventually wrestled the 9 mm Beretta from her grasp, the affidavit said. At that point, he told the woman with whom he was romantically linked to call the police.

Nina Thomas was arrested on a felony charge of burglary of a habitation with the intent to commit aggravated assault with a deadly weapon. The incident was first reported by TMZ.

After getting word that the episode would soon be made public, Earl Thomas acknowledged late Wednesday in a video on his Instagram account that there was “an altercation between me and Nina."

“It's really not anybody's business. It's (ticking) me off that it got out, but it's the world we live in today," he said in the video, which has since been deleted. “Stuff like this happens. We try to live the best life we possibly can, but sometimes it doesn't go as planned."

"We have already gathered information which controverts every single allegation made on the night in question," Goins said.

Earl Thomas, who turned 31 on Thursday, earned his seventh Pro Bowl selection last season. He signed a four-year deal with the Ravens in April 2019 and was an integral part of a defense that helped Baltimore finish with an NFL-best 14-2 record in the regular season.

In a statement, the Ravens said: “We became aware of the situation when we read and saw it on the reports late last night and early this morning."

Nina Thomas told police she tracked her husband’s whereabouts to the rental home through his Snapchat account, which showed several videos of Earl with the other woman. Two women who Nina brought to confront her husband were also arrested on burglary charges: her sister and her best friend, the ex-spouse of Seth Thomas.

Upon their arrival at the home, police found Nina Thomas with a knife in her hand chasing her husband, who had the pistol, around a vehicle, according to the affidavit. The two were ordered to drop their weapons and drop to the ground, and they complied.

Police said the sister took a video of the altercation with her cellphone. The footage showed Nina Thomas pointing the gun at her husband's head from less than a foot away with her finger on the trigger and the safety disengaged, the affidavit said.

It states that Earl Thomas told police that he was “romantically involved" with the other woman for “3-4 months and that he was working on his relationship with his wife."

Earl Thomas was not arrested. Nina Thomas was released from custody after making bond.

“As her attorney, I am here to declare that my client unequivocally and categorically denies these allegations," Goins said. “We look forward to our day in court where we can clear her good name."