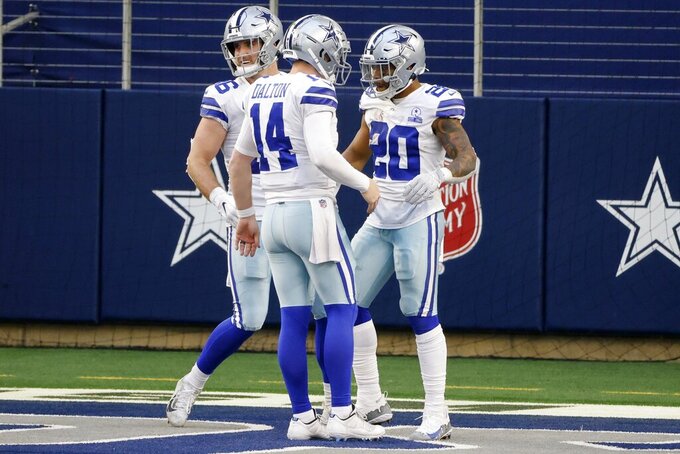 ARLINGTON, Texas (AP) — Tony Pollard and the Dallas Cowboys gave Ezekiel Elliott a reason to come back next week after the two-time rushing champion missed a game because of injury for the first time in his career.

Pollard ran for two touchdowns with Elliott sidelined by a calf issue he's been battling for weeks, and the Cowboys kept their slim playoff hopes alive with a 41-33 victory over the San Francisco 49ers on Sunday.

Four of the seven Dallas scores were set up by turnovers from the 49ers (5-9), who became the second Super Bowl runner-up in the past 13 seasons to finish with a losing record the next year. San Francisco was eliminated from playoff contention with the loss and Arizona's win later in the day.

The Cowboys (5-9) are a game back in the NFC East with two games remaining but have to win both against Philadelphia and the New York Giants while Washington loses twice.

Dallas won consecutive games for the first time in coach Mike McCarthy's first season by holding off an old playoff rival in a matchup that was moved out of prime time with both teams starting the day in last place in their divisions.

“If we don’t take care of our own business, nothing else matters,” McCarthy said. “We’re clearly focused on what’s in front of us. We really want to finish strong with these two division games. That’s clearly my focus.”

Andy Dalton threw for two touchdowns, and Greg Zuerlein kicked a tiebreaking field goal early in the fourth quarter after the second interception by Nick Mullens, who was replaced by C.J. Beathard after losing feeling in his elbow.

Beathard handled the last two possessions and threw a 49-yard Hail Mary touchdown to Kendrick Bourne on the final play.

Mullens also lost a fumble that led to one of two early touchdowns for a 14-0 Dallas lead a week after the backup quarterback had a fumble and interception returned for TDs in a loss to Washington.

“I really wanted the guys to come out and play good football, and I think offensively, defensively and special teams guys did a lot of good things,” coach Kyle Shanahan said. “When you have four turnovers, it doesn’t matter what you do, especially when you’ve got zero.”

Jeff Wilson's 1-yard run for San Francisco tied the game at 24 late in the third quarter on one of the Niners' four TD drives of 75 yards. Rookie Brandon Aiyuk and Jordan Reed had short TD catches to cap drives earlier in the game.

Mullens had a chance to lead the 49ers to a tiebreaking score, but safety Donovan Wilson's first career interception put Dallas in position for the lead. After three straight incompletions, Zuerlein kicked a 46-yarder for a 27-24 lead.

Anthony Brown had the second pick of Mullens, and Pollard broke several tackles on a clinching 40-yard score. Pollard, who had a 1-yard TD plunge early, finished with 69 yards. Dallas had 47 yards rushing before Pollard's long TD.

“In the second half, I feel like we were just trying to find a way to get a first down, we weren’t able to run the ball very well,” Dalton said. “That run he had at the end of the game was special. But we’ve got to find a way to be most consistent in the run game.”

Elliott, who was ruled out before the game after being listed as questionable, said he felt a “tug” in the calf Saturday.

“I can play with pain and soreness, but with a tug, I can’t be as explosive as I need to be,” Elliott said. “I’m not shutting it down. We’ll see how it goes and I’ll see if I can get out there next week.”

Before Bourne's Hail Mary catch on the final play, CeeDee Lamb returned an onside kick 47 yards for a Dallas touchdown. The obvious reaction was that the rookie receiver should have gone to the ground to let Dallas run out the clock. But Lamb said it was “just too open.”

“It was almost like you can't blame him,” McCarthy said. “Those are great corrections to have in your team meetings on Wednesday.”

49ers: At Arizona in an actual road game Saturday in the stadium that has become San Francisco's temporary home. It will be the sixth of seven straight games outside of California to finish the season after Santa Clara County banned contact sports over COVID-19 issues.

Cowboys: The final home game next Sunday against Philadelphia.