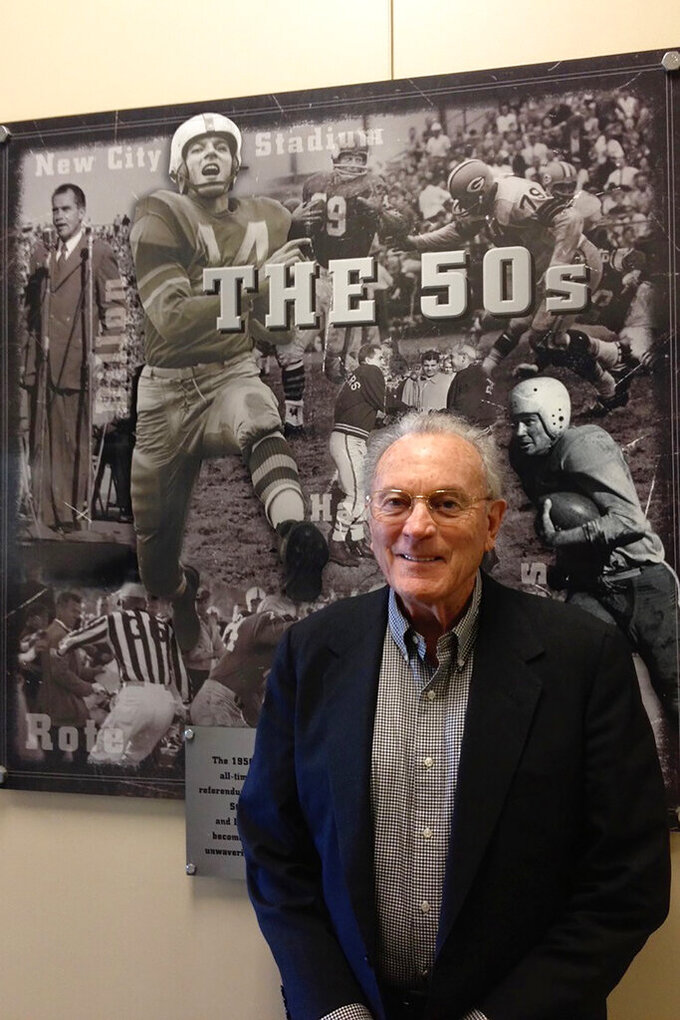 In this October 2012 photo provided by Karen Gooch, former Green Bay Packers football player Bobby Dillion poses at Lambeau Field in Green Bay, Wisc. Of the 26 men who entered the Pro Football Hall of Fame as Packers and preceded Bobby Dillon into the shrine, nearly all won an NFL championship in Green Bay. Dillon never got the chance. (Karen Gooch via AP) 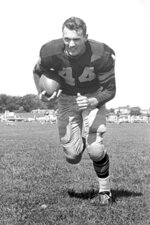 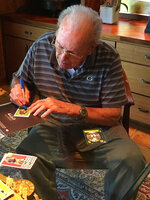 Of the 26 men who entered the Pro Football Hall of Fame as Packers and preceded Bobby Dillon into the shrine, nearly all won an NFL championship with Green Bay. Dillon never got the chance.

Indeed, during his eight superb seasons with the storied franchise, Dillon was one of the best defensive players in the league. But the Packers were an NFL weakling at the time, going 33-61-2 while Dillon was playing safety so well he made four All-Pro teams and intercepted 52 passes — second overall when he retired to Emlen Tunnell.

And he did it with one eye.

Dillon, who died at age 89 in August 2019, five months before he was selected for the Hall of Fame as part of the centennial class, lost his left eye as an adolescent.

“He never saw it as a handicap,” says his daughter, Karen Dillon Gooch. “It happened so young, he was about 12. He said when he played, ‘I had to turn my head a lot more and have my head on a swivel.’ He didn’t let it stop him; he would make fun of himself, try to make other people at ease.

“The local hospital would call Daddy when someone lost an eye and he would come and talk to them and bring a signed football card or something.”

Dillon starred at Texas, which asked his father to sign a waiver in case his eye was injured so the school would not be held responsible. His father complied.

Dillon was a third-round draft pick in 1952 and not only became a starter but picked off four passes as a rookie. He followed with nine interceptions in 1953, seven in 1954, then nine, seven and nine in the next three seasons. His 52 career interceptions are a team record — and consider that Hall of Famers Willie Wood (48), Herb Adderley (39) and Charles Woodson (38) played in Green Bay.

Long after he left the game, Dillon said, according to the hall’s website: “It tickles me, after all this time, to still hold it. And I think it’ll be a long time before it’s broken, although with 16 league games, they have a better chance, where we had only 12. It gives them a third more opportunities.”

Dillon initially planned to retire after the ’58 season for the simple reason he could make more money working for Wilsonart, a countertop company for which he eventually became the CEO. But Vince Lombardi took charge as Packers coach in 1959 and asked Dillon to return, calling him the NFL’s best defensive back.

“Lombardi came in and he called Daddy to come out of retirement for a year and help him get the defense going,” his daughter says, “and Wilsonart agreed to hold his job for a year. Daddy reported late to the camp and there was a fine, and he told Lombardi, ‘I can’t pay that fine.’ So Lombardi told him to pay it and he would slip it back to him somehow. And Lombardi did.”

Green Bay went 7-5 that season, the best record during Dillon’s career. But Dillon opted to stay in Texas with his family after that — missing the Packers’ trip to the NFL title game in 1960, and the dynasty that followed.

He left with an outstanding resume, but also with the ugly remnants of a series of concussions from playing football. Gooch notes that her father’s subsequent dementia was a result of such head trauma. Late in life, he often couldn’t recall details from his long stint with Wilsonart, though she says he never forgot his football career.

And she remembers how popular Bobby Dillon was in Titletown.