Prescott, Cowboys show promise, but have to change history 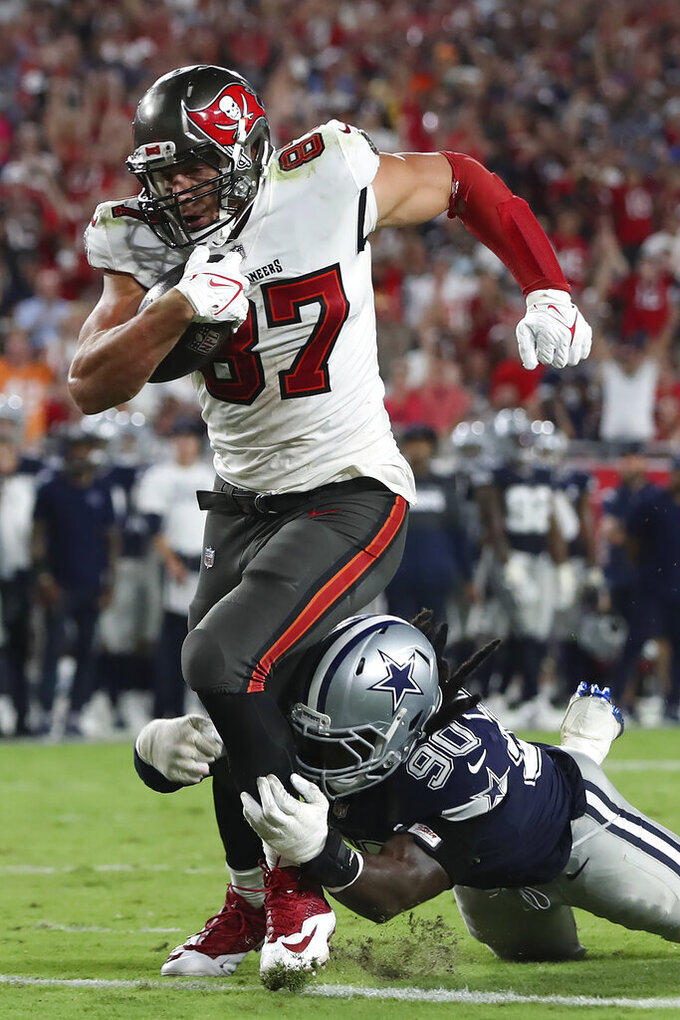 If Dak Prescott and the Dallas Cowboys are going to see Tom Brady again this season, as the star quarterback boldly told the seven-time champ, they're going to have to change recent history. Some older stuff, too.

Those were Prescott's parting words after Brady led the Buccaneers to the winning field goal in the final seconds of a 31-29 victory for the defending Super Bowl champions in the opener.

The Cowboys missed the playoffs the past two seasons, in large part last year because of the ankle injury that ended Prescott's season in Week 5. They haven't been the NFC championship game since the last of the franchise's five Super Bowl titles 26 years ago.

“I think I told everybody we’d see them again and that’s just the confidence that I have in this group,” Prescott said. “The expectations I have is this is a playoff team that is going to make a big push this year.”

Prescott had a remarkable return 11 months after the injury, going 42 of 58 for 403 yards and three touchdowns when it was clear the Cowboys didn't think Ezekiel Elliott would be able to do much against last year's No. 1 run defense.

Dallas forced four turnovers, but the defense couldn't get the key stop late. That's what has helped keep the Cowboys out of the playoffs, and from going deeper in the postseason when they were good enough to reach it in recent years.

“We got to make sure young guys mix in with the old guys and I think we got a chance to be a really good defense,” rookie linebacker Micah Parsons said. “There was some people that have never played in this defense before until today, so I think we can build off this week and then go on to next week and get even better.”

Barring injury, the Cowboys have will have one of the best receiving groups in the league. Amari Cooper and CeeDee Lamb combined for 20 catches, 243 yards and three touchdowns. Drops are the only concern. Lamb was among the league leaders as a rookie last year and had a costly one on Dallas' opening drive. A daring throw over the middle later in the game went through Lamb's hands, resulting in Prescott's only interception.

Coach Mike McCarthy thought Brady getting rid of the ball quickly kept the Cowboys from getting pressure on him. Regardless, the first chance for DeMarcus Lawrence and Randy Gregory to get most of the snaps as a pass rushing pair was a bit of a dud.

Connor McGovern probably made the Cowboys feel better about their depth in the offensive line after filling in nicely for four-time All-Pro RG Zack Martin, who was out after testing positive for COVID-19. Prescott was sacked once. It was hard to gauge the run blocking because Dallas didn't do enough of it. Elliott had just 11 carries for 33 yards.

Kicker Greg Zuerlein missed most of the preseason coming off back surgery, and it showed. He badly missed a 31-yard field goal early, then an extra point. While he was perfect on a 48-yarder for a one-point lead with 1:24 remaining, doubts are going to linger about his consistency without much chance to get “Greg the Leg” in football shape.

WR Michael Gallup, the third option behind Cooper and Lamb, injured a calf against the Buccaneers and was walking with a slight limp after the game. Gallup is expected to miss multiple weeks. ... Coach Mike McCarthy said S Darian Thompson will miss “some time” with a hamstring injury. ... Martin, who tested positive five days before the opener, should have enough time to recover before the next game, Sept. 19 at the Los Angeles Chargers.

400-plus, 1-3 — Prescott has thrown for at least 400 yards in his past four full games. Yet the Cowboys have a 1-3 record. The averages are astounding: 38½ completions on 55 attempts (70% completion rate), 457 yards, almost three touchdowns per game. Dallas just isn't getting enough defense to go with it.

The schedule gets easier, as expected after opening against the defending champs. The Chargers will be tricky, though, after such a strong rookie year from quarterback Justin Herbert. Dallas figures to be favored the three games after the LA visit, but an 0-2 start will only increase the anxiety coming off a 6-10 season in McCarthy's less-than-stellar debut. And now there's more instability in the offensive line with right tackle La'el Collins suspended five games for violating the NFL's substance-abuse policy.