Prescott's top weapons have big deals; is Cowboys QB next? 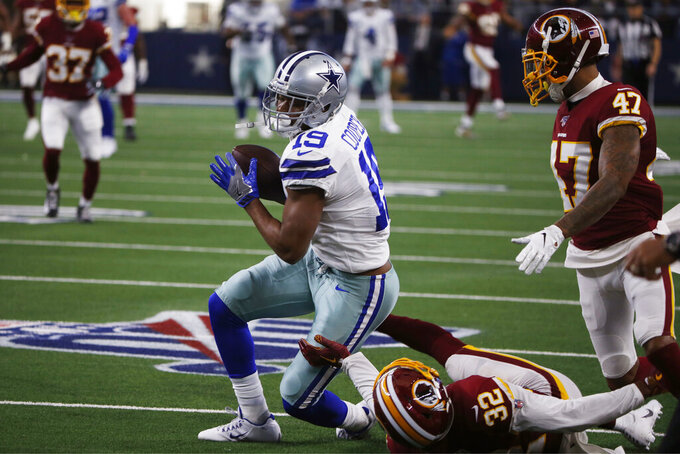 FILE - In this Dec. 15, 2019, file photo, Dallas Cowboys wide receiver Amari Cooper (19) pulls down a reception over Washington Redskins cornerback Jimmy Moreland (32) to help set up a touchdown during the first half of an NFL football game in Arlington, Texas. A person with knowledge of the deal says the Cowboys and top receiver Cooper have agreed on a long-term contract. (AP Photo/Ron Jenkins, File)

Dak Prescott has his No. 1 receiver in place again, and of course, the star running back who signed a big contract last summer.

The question is whether the quarterback of the Dallas Cowboys will play under the franchise tag or get his own long-term deal to go with those handed out to Amari Cooper and Ezekiel Elliott.

The biggest moves of free agency so far for the Cowboys have been placing the roughly $31.5 million tag on Prescott and re-signing Cooper on a $100 million, five-year contract that makes him the second-highest paid receiver behind Atlanta's Julio Jones.

The exclusive tag on Prescott means the 2016 NFL Offensive Rookie of the Year can't negotiate with other teams, but he'll have to sign the lucrative one-year tender before he can start working with new coach Mike McCarthy.

The Cowboys have almost an entirely new coaching staff after underachieving and missing the playoffs in the last of nine full seasons under Jason Garrett. Thus, there's plenty of urgency to get Prescott's contract situation settled.

While the new coronavirus has created uncertainly for the NFL's offseason, it's also buying the Cowboys more time to reach a deal with Prescott. The sides have until July 15, but Dallas wants the two-time Pro Bowler in the building long before that.

Elliott was the focus of all the contract questions last summer, when the two-time rushing champion held out all of training camp. He signed a $90 million, six-year contract days before the start of the regular season.

The Cowboys knew they would be busy in free agency this year because they had 24 potential unrestricted free agents, including several defensive starters.

Most of those players are gone, headlined by cornerback Byron Jones agreeing with Miami on a huge contract the Cowboys simply couldn't afford. Productive defensive end Robert Quinn chose Chicago.

Defensive tackle Maliek Collins and safety Jeff Heath are headed to the Las Vegas Raiders along with tight end Jason Witten, whose distinguished Dallas career likely ends with a bushel of club records, including seasons (16), catches (1,215) and yards receiving (12,977).

The Cowboys signaled the end of the Witten era before he chose to join the Raiders by signing fourth-year player Blake Jarwin to a four-year contract.

Dallas hopes to counter the key losses on defense with the expected signing of a pair of veterans in defensive tackle Gerald McCoy and cornerback Maurice Canady.

The Cowboys also are bringing back linebacker Sean Lee for an 11th season, along with cornerback Anthony Brown and safety Darian Thompson.

Dallas is in the market for a slot receiver after losing its top option for the second straight year. Randall Cobb is set to join Houston after Cole Beasley went to Buffalo last year.

Kicker Kai Forbath is returning on a one-year deal after making all 10 kicks when he was brought in to replace the shaky Brett Maher. The club also is planning to re-sign long snapper L.P. Ladouceur, who is set to match Witten's club record of 16 seasons.