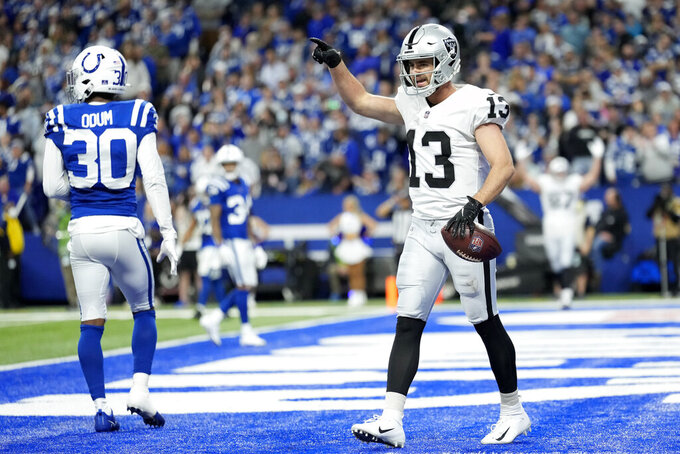 BETTING LINE: Chargers by 3, according to FanDuel SportsBook.

TURNOVER DIFFERENTIAL: Chargers plus-1; Raiders minus-11.

CHARGERS PLAYER TO WATCH: QB Justin Herbert has thrown a franchise-record 35 touchdown passes en route to be elected a starter for the AFC in the Pro Bowl. Herbert is also tied for second in the league in completions (409) and third in passing yards (4,631). Two of his 16 career 300-yard games have come against the Raiders.

RAIDERS PLAYER TO WATCH: QB Derek Carr has a chance to appear in the playoffs for the first time in his eight-year career with a win after missing the Raiders' last trip in 2016 with an injury. Carr has engineered two fourth-quarter comebacks in the past three games and needs only 72 yards to break Rich Gannon's franchise record for yards passing in a season of 4,689 set in 2002. But Carr also has committed a career-high 19 turnovers with at least two in four straight games.

KEY MATCHUP: Chargers CB Chris Harris Jr. vs. Raiders WR Hunter Renfrow. One of the NFL's best slot defenders in recent years will match up with one of the league's shiftiest slot receivers this season. Renfrow's 99 catches on the season are eight shy of Darren Waller's franchise record set in 2020. Renfrow has also been Carr's most dependable red-zone target with seven TDs.

KEY INJURIES: C Corey Linsley (back) is questionable after leaving during the first quarter of last Sunday’s game against Denver. ... LB Drue Tranquill (ankle) is likely to return to the lineup after missing last week. ... The Raiders are hoping to get back TE Darren Waller for the first time since he injured his knee on Thanksgiving.

SERIES NOTES: The Chargers won their only trip to Las Vegas 30-27 in overtime last season. ... Herbert has a 110.8 passer rating with seven TDs and no INTs in three starts vs. the Raiders. ... Carr has 20 TD passes and nine INTs in 15 starts against the Chargers. ... Chargers WR Keenan Allen is tied for the sixth most catches all time vs. the Raiders with 87 for 940 yards.

STATS AND STUFF: The winner of this game clinches a playoff spot. The Raiders can also get in with losses by both Pittsburgh and Indianapolis, while the Chargers will be eliminated with a loss. ... The Chargers are 2-1 in prime-time games this season. This will be the first time since 2014 they are making at least four prime-time appearances. … Coach Brandon Staley is trying to become the fourth coach since the merger to lead the Chargers to the playoffs in his first season with the franchise. … RB Austin Ekeler is second in the league with 18 scrimmage touchdowns (11 rushing, seven receiving) and has reached the end zone in the last seven games he has played. He rushed for a career-high 117 yards in the Week 4 win over the Raiders. … Allen has over 100 receptions for the fourth straight season. He has 503 catches since the start of 2017 and is one of 10 players in league history with at least 500 in a five-year span. … WR Mike Williams has more than 1,000 yards receiving for the second time in three years and has career highs in receptions (67) and yards (1,027). … DE Joey Bosa leads the league with six strip-sacks. Of his 57 career sacks, seven have been against Carr. … K Dustin Hopkins has made 17 of 18 field goals since being signed. His 94.4% accuracy rate is the best start in team history by a kicker with at least 15 attempts. … KR/PR Andre Roberts had a 101-yard kick return for a TD against Denver last week. He leads the league in kick return yards (963) and is 10th in average (27.5). ... The Raiders are seeking their first four-game winning streak since 2016. ... Las Vegas set an NFL record by winning five games with a score on the final play with four game-winning field goals from Daniel Carlson and a walk-off TD pass in OT from from Carr to Zay Jones in the season opener. ... Carlson has made 13 of 14 FGs in the final two minutes of regulation or overtime since joining the Raiders in 2018. ... Las Vegas is the fifth team since 1960 to win three straight games without getting a takeaway in any of them and the first team since Buffalo in 1964 to win three straight with a turnover margin of minus-2 or worse in each game. ... The Raiders have a minus-11 turnover margin. The last team to make the playoffs with a turnover margin that poor was Indianapolis (minus-12 in 2012). ... Las Vegas opponents are 15 for 22 (68.2%) on fourth downs, second highest in the NFL. ... Jones has at least five catches in four straight games.