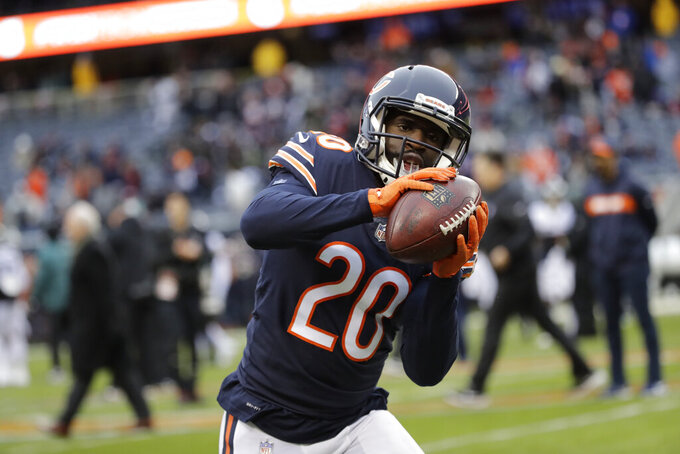 FILE - In this Jan. 6, 2019, file photo, Chicago Bears cornerback Prince Amukamara (20) warms up before an NFL wild-card playoff football game against the Philadelphia Eagles in Chicago. Few defenses lead the NFL in interceptions for consecutive years, but cornerback Prince Amukamara and other members of the Bears' secondary think they are primed to make a run at doing it after 27 last time out. (AP Photo/Nam Y. Huh, File)

A year after leading the NFL with 27 interceptions, the Bears view defensive changes as either no obstacle or even as an asset while they try to do something rare for any defense: repeat as league interception leaders.

"I'm excited with my ball production personally, and how I'm breaking on the balls and reading routes," Amukamara said after making three interceptions last year. "I still credit that to (former defensive backs) coach Ed Donatell, what he did for my career and how I play the ball.

"I think he took it to another level, so I'm still trying to build upon that."

Despite all the change, Amukamara is feeling capable at age 30 of being part of a secondary that takes a step forward.

"I just feel very comfortable," Amukamara said. "I feel like I'm learning a lot of ball ever year, especially with the addition of coach Deshea, I mean, him being a former player and having him as a coach.

"Donatell taught me more about playing the ball and schemes and different schemes and what to look at. Now Deshea, he played like 13 to 14 years and now he's teaching me extra tips like how to take care of my body, like what extra stuff I can do."

Although Amukamara had never been known for interceptions, he defended passes well prior to last season. On the other side of the field, Bears cornerback Kyle Fuller tied for the NFL lead with seven interceptions and was an All-Pro.

Under Pagano, Amukamara and the secondary has enjoyed a strong training camp daily.

"I think it's huge," Amukamara said of camp's importance. "I mean, I just turned 30 in June. One thing you don't want to hear, especially in my position is like, 'Oh you're getting old,' or 'He's lost a step' and stuff like that. To show the scouts, to show the general managers the decision makers that I can still press, I can still run, I can still break with these young guys, I think like personally that's huge for me."

No defense has led the league outright in interceptions for consecutive years since the 1972-73 Pittsburgh Steelers. The 2016-17 Baltimore Ravens shared the interception title one year and led outright one year, as did the 1994-95 San Francisco 49ers.

Taking a run at that accomplishment under a new defensive coordinator could be a matter of picking up the scheme changes.

"It's our job to put them in the best position to be successful," Pagano said. "If we slow them down and they're out there thinking and they can't play fast, then that's on me."

The personnel changes seem to point toward making more interceptions, not fewer.

Skrine has nine interceptions in his eight-year career, while Callahan had four in four seasons.

"That's what I saw last year, was him being able to make plays (with the Jets), and I've seen that over his career," Bears coach Matt Nagy said. "He's a savvy vet and I love him in there."

The Bears had a franchise-record low of eight interceptions each season between 2015 and 2017. After Mack joined the pass rush, they made more picks than any NFL team since Seattle's "Legion of Boom" made 28 in 2013.

And in this training camp, the Bears have intercepted Mitchell Trubisky, Chase Daniel and Tyler Bray on a daily basis.

"When you work on taking away the ball in practice, naturally it happens in the game."