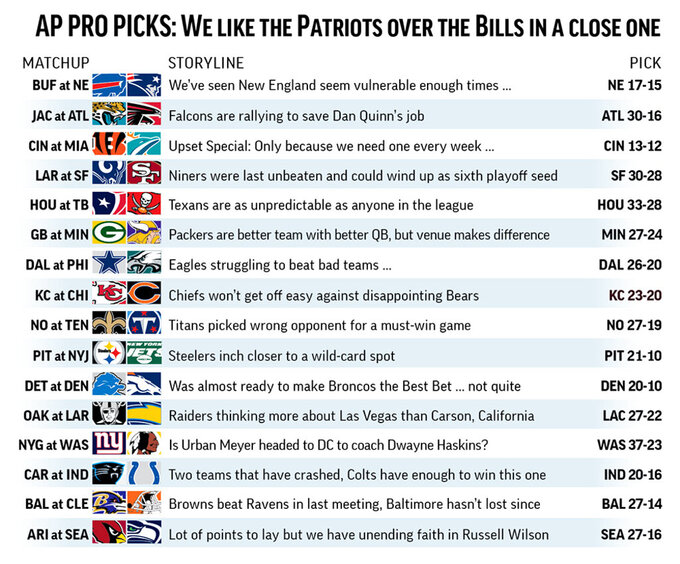 Not since the pre-Tom Brady days have the Bills been such a factor in the AFC East. A victory Saturday at New England would lift Buffalo into a tie atop the division the Patriots have ruled for the last decade.

This is an opportunity for the Bills to stamp themselves as title contenders — not just division championship but Super Bowl threats. Gillette Stadium is about the most unkind place in the NFL for the Bills, and Brady has made a living beating them.

"Before (coach) Sean (McDermott) got here, it was a culture of losing," veteran linebacker Lorenzo Alexander says. “You have to intentionally and methodically change the concept of ‘Oh, here it goes again,’ or 'We expect to lose.' But it takes time.”

It also has taken some slippage by the Patriots, particularly on offense around the 42-year-old Brady. Then again, we've seen New England seem vulnerable enough times in recent years yet somehow come through.

Brady will need to do so against a staunch unit.

“This is the best defense that we play, and the challenge is incredible,'' Patriots offensive coordinator Josh McDaniels says. ”We’ve gotten to see them once this year, and now we have another opportunity to prepare and play an incredibly important game to our season this week."

New England, ranked seventh in the AP Pro32, is a 6-point choice over No. 9 Buffalo. The Bills will make it close and could steal this one — and the division.

Falcons are rallying to save Dan Quinn's job. Jaguars are a mess.

Only because we need one every week ...

Niners were last unbeaten team and now could wind up sixth playoff seed.

Chiefs won't get off easy against disappointing Bears.

Was almost ready to make Broncos the Best Bet. Not quite.

Is Urban Meyer headed to DC to coach Dwayne Haskins?

Two teams that have crashed. Colts have enough to win this one.

A lot of points to lay, but we have unending faith in Russell Wilson.