Pro Picks: Browns not among 9 home dogs vs. Steelers 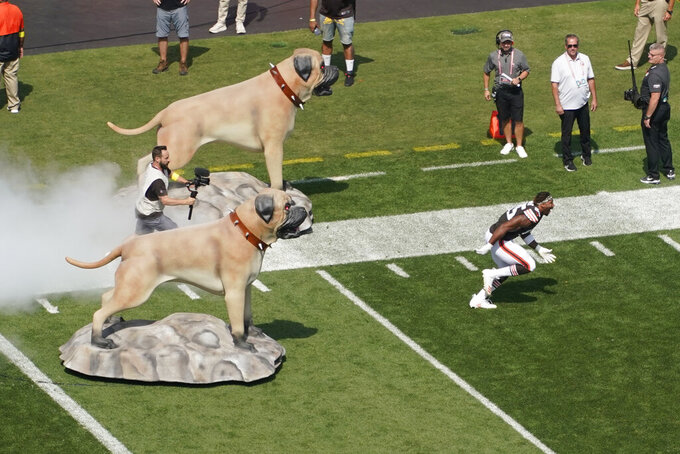 Behind the Dawg Pound, the Cleveland Browns aren't among them.

The Browns host the Pittsburgh Steelers on Thursday night to kick off a week featuring more road favorites than home. Both teams are aiming for a 2-1 start and coming off disappointing losses.

The Browns, with Jacoby Brissett filling in for Deshaun Watson, are rolling on the ground behind Nick Chubb and Kareem Hunt.

The Steelers, with Mitchell Trubisky replacing the retired Ben Roethlisberger, still haven’t found a rhythm on offense despite a talented receiving corps.

The Browns are 4 1/2-point favorites over the Steelers, according to FanDuel Sportsbook. That’s too many points in a matchup between bitter AFC North rivals.

The last time the teams met on a Thursday night in 2019, Myles Garrett smashed Mason Rudolph over the head with the quarterback’s helmet.

Expect cooler heads this time around.

Joe Burrow has taken a beating and the defending AFC champions are winless. They’re set up to get back on the winning track against the improved Jets.

This could be a preview of the NFC championship. Brady and the Buccaneers destroyed the Packers 38-10 in the 2020 regular season and upset them on the road in the conference title game that season on their way to winning the Super Bowl. Tampa is too banged-up to do it again.

Baltimore (minus 3) at New England

After a defensive collapse in the fourth quarter against Miami, the Ravens continue their season-opening, four-game stretch against the AFC East with a trip to New England. The Patriots are still figuring out their offense while Baltimore’s Lamar Jackson is a dynamic difference-maker.

The Bills have steamrolled the defending Super Bowl champion Rams and the Titans, who were the AFC’s No. 1 seed last season. They have a franchise-best, seven-game win streak over Miami and outscored the Dolphins by a combined 61-11 in two meetings last year. Tua Tagovailoa and the rest of Miami’s high-flying offense will help keep this one close.

New Orleans (minus 3) at Carolina

The Panthers have lost seven in a row at home, nine straight games overall and coach Matt Rhule’s job status is in danger. The Saints couldn’t knock off the Buccaneers but have to avoid a letdown after an emotional game. Jameis Winston resorted to 2019 form against Tampa. Baker Mayfield is due for his first win with the Panthers if the offense relies on Christian McCaffrey.

Kansas City (minus 6 1/2) at Indianapolis

Patrick Mahomes and the Chiefs are rested after a Thursday night win over the Chargers. The Colts are embarrassed following a 24-0 loss at Jacksonville.

Jared Goff has Detroit’s offense soaring. The Vikings are coming off a short week following a beatdown in Philadelphia on Monday night. Kirk Cousins should have an easier time finding Justin Jefferson this time around.

Philadelphia (minus 6 1/2) at Washington

The Eagles are flying high after dominating the Vikings. Jalen Hurts has been spectacular, setting up a showdown against Carson Wentz and the Commanders. The road team has won the last three meetings in this division rivalry.

The Raiders are still looking for their first win under Josh McDaniels after wasting a 20-0 halftime lead against Arizona. The Titans are reeling and have a short week following Monday night’s debacle in Buffalo.

The Texans’ inability to finish games has cost them two wins. The Bears ran the ball well in a loss to Green Bay, and should rely on the ground game to take pressure off Justin Fields.

Jacksonville (plus 7) at Los Angeles Chargers

Doug Pederson has not only changed the culture in Jacksonville but has the Jaguars playing like a team that should be in the mix in a wide-open AFC South. The Chargers, led by Justin Herbert, are on another level.

The Seahawks are struggling to score points. The Falcons are staying close but searching for their first win.

The Rams have been mistake-prone in two games but they’ve won 10 of the last 11 against the Cardinals, including a playoff win last season.

San Francisco (minus 1) at Denver

Russell Wilson knows San Francisco quite well, and the Broncos have to get their sputtering offense going. The 49ers’ Super Bowl odds improved with Jimmy Garoppolo replacing the injured Trey Lance.

The Giants are looking for their first 3-0 start since 2009. Big Blue has reason to get hyped. They’re facing Cooper Rush, who filled in nicely for Dak Prescott in a win over the Bengals.