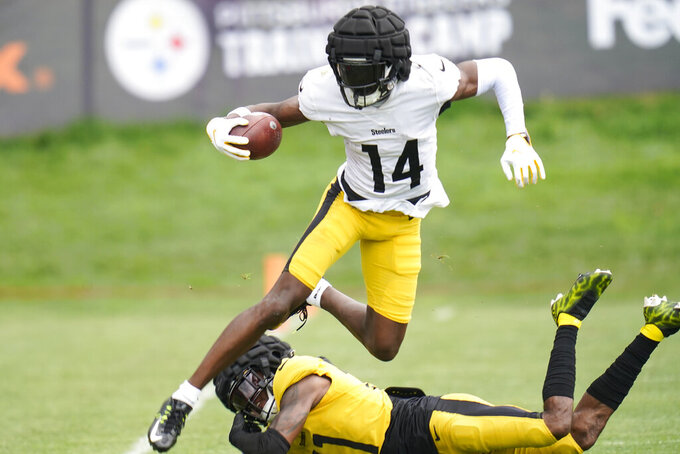 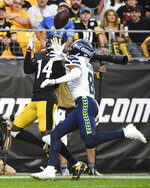 PITTSBURGH (AP) — The secret might be out about Pittsburgh Steelers rookie wide receiver George Pickens.

Pickens has been the talk of the team’s training camp, as he has turned heads with his big-play ability through three weeks of workouts at St. Vincent College.

The promising rookie was just as impressive in his professional debut, helping the offense to three first-half scoring drives during Pittsburgh’s preseason-opening win against Seattle on Saturday.

Pickens was pleased with his first preseason game, but he’s far from satisfied.

Pickens finished the game with three receptions for 43 yards, including a highlight-reel 26-yard touchdown catch.

“I’ve been doing the same thing I’ve been doing at practice,” Pickens said. “Just to get the feel of the game ... that’s really the most important part.”

Pickens has quickly built chemistry and trust with Mitch Trubisky, Mason Rudolph and Kenny Pickett, the three quarterbacks vying for the opportunity to replace the retired Ben Roethlisberger as the Steelers new starter.

Pickens had five targets on Saturday, tied for the most among all players. Trubisky immediately put Pickens into the mix with a 9-yard short pass on the first play of the game and another deep target later in the drive. Pickens later made a spinning 8-yard grab near the sideline in tight coverage.

“He’s standing out,” Trubisky said. “He’s making plays and he’s definitely a guy you want to go to. He’s been really impressive up to this point.”

The most impressive moment came during his 26-yard touchdown reception from Rudolph late in the first quarter. Pickens rushed past Seahawks rookie cornerback Coby Bryant, created separation near the goal line and barely kept his toes inbounds, as he pulled in a high-arching, over-the-shoulder pass at the back pylon.

Rudolph has witnessed it throughout training camp, not only Pickens’ innate ability to separate, but also the capability to come down with a reception while battling with a defender.

“We’ve seen it where it’s a 50-50 shot and he makes those plays,” Rudolph said. “It was good to connect and build some confidence. He made a great play and got his toes down when we needed it.”

Pickens displayed his abilities away from the football, too. His downfield block took out two defenders and helped Anthony McFarland bust off a 24-yard run on a third-and-1, a crucial play that led to a Steelers touchdown on the game’s first drive.

Pickens also delivered a hard shove to Bryant from the line of scrimmage on another opposite-field run. It was a push so hard that isolated replays went viral on social media, as Bryant tumbled several yards backward following the shove.

“He’s a young player with a lot of potential,” Rudolph said. “He’s already done well and I think he’s going to continue to fine-tune the little things. We’re excited about it.”

So are the Steelers, who feel they may have gotten the steal of the 2022 draft after selecting the former Georgia standout in the second round.

Pickens tore the ACL in his right knee in March 2021. But less than nine months after his injury, Pickens made an impact in Georgia’s run through the College Football Playoff, as the 6-foot-3 standout hauled in a 52-yard reception in the win against Alabama during the national championship game.

Pickens likely would have been rated a first-round pick if not for his injury.

Pickens, who ran a 4.47 40-yard dash, caught 85 passes for 1,240 yards during his first two seasons with Georgia. The Steelers were well aware of Pickens before his knee injury on the fourth day of Georgia’s spring drills and didn’t hesitate to add the star receiver to a young, talented offensive skill group that includes Diontae Johnson, Najee Harris, Chase Claypool and Pat Freiermuth.

“Instead of going off analytics, I wanted to show people that I could really play,” Pickens said. “That’s what I was telling people at the (NFL) Combine, the type of player that I am.”

Pickens has certainly proven as much through three weeks of training camp practices and his first preseason game in the NFL.

“Anytime the ball is in his area, it’s a big-play opportunity,” Trubisky said. “We have to keep getting reps with him, keep giving him opportunities and he’s going to continue to do special things.”