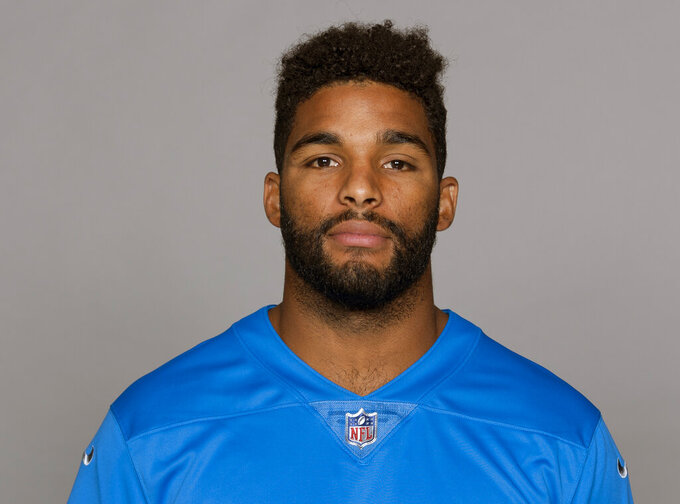 FILE - This June 4, 2018 photo, shows Trevor Bates of the Detroit Lions. Police say Bates was arrested in New York for failing to pay a taxi fare and then punching a police officer in the face in the early hours of Saturday, Jan. 26, 2019. The 25-year-old linebacker was charged with assault, resisting arrest and theft of service after police were called around 3 a.m. Saturday at a hotel near New York's LaGuardia Airport. (AP Photo/File)

NEW YORK (AP) — Trevor Bates, a linebacker for the Detroit Lions, was arrested Saturday in New York on charges that he failed to pay a taxi fare and then punched a police officer, who suffered a concussion.

Bates, 25, was taken to a police precinct house for refusing to pay the $32 yellow taxi fare from Manhattan to the Hampton Inn in Queens, the prosecutor said.

Bates, originally from Maine, is being held pending arraignment. It was not immediately clear whether he had a lawyer.

At the precinct house, Bates was told that as long as there were no outstanding warrants, he would receive only a desk appearance ticket and be allowed to leave, Brown said. The prosecutor said Bates refused to be fingerprinted and became increasingly agitated.

As Sgt. James O'Brien tried to calm him down, Brown said, the athlete punched him in the face and was hit with a stun gun to subdue him.

O'Brien suffered a concussion and needed stitches over his left eye, according to the prosecutor. The 6-foot-2, 240-pound Bates was taken to a hospital in Queens for evaluation.

The Lions' general manager, Bob Quinn, said in a statement that the team is aware of Bates' arrest but has no further comment for now.

If convicted, Bates faces between probation and up to seven years in prison.

Bates is in his first season with the Lions, appearing in nine games.