Prospects ready for their closeup on draft night from home 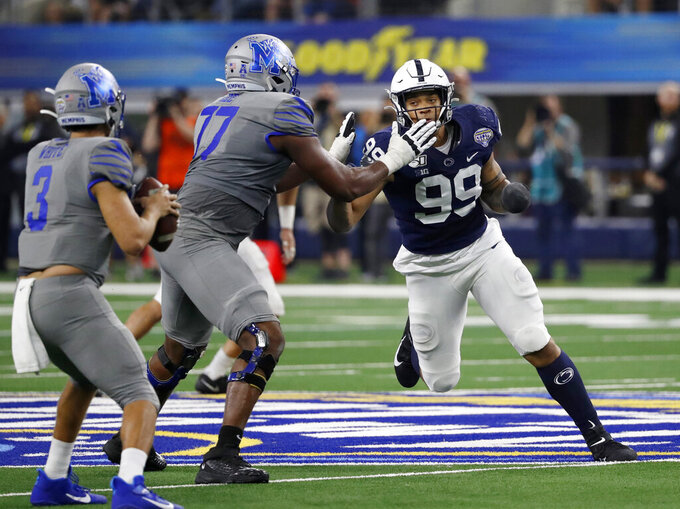 In this Dec. 28, 2019, photo, Penn State defensive end Yetur Gross-Matos (99) faces off against Memphis offensive lineman Obinna Eze (77) while quarterback Brady White (3) looks to pass during the second half of the NCAA Cotton Bowl college football game in Arlington, Texas. Gross-Matos would have liked to be in Las Vegas on Thursday, April 23, 2020, with other NFL draft prospects, but the Penn State defensive lineman is just as comfortable watching it at home. (AP Photo/Roger Steinman)

Yetur Gross-Matos would have liked to have been in Las Vegas for the NFL draft on Thursday night, but the Penn State defensive lineman is OK participating from home.

Gross-Matos is one of 58 prospects who will take part remotely in the draft, which has gone virtual this year because of the coronavirus pandemic. The players received video kits from the NFL that will record their reactions to being selected, whether is it is during the first round on Thursday, second or third rounds on Friday, or during the remaining four rounds on Saturday.

“I would have liked to go to the draft because it would have been a great experience. But being at home with a few people and family is more comfortable,” said Gross-Matos, who will be watching from his home in Fredericksburg, Virginia, with his mom, dad, brother, girlfriend and trainer.

The kits sent to prospects include two Verizon phones, two light stands, a pair of tripods, a headset for interviews and a microphone. One of the phone cameras will be on the entire time until the player is selected while another will be used for interviews with ESPN/NFL Network, Commissioner Roger Goodell and with the teams that pick them.

The package also includes hats from all 32 teams, so the players can put on the right one after they're selected.

The NFL had the prospects run a test Tuesday in which they called in and showed their setups and ensured the connections were stable. Gross-Matos said he has both cameras set up in his living room. One will be focused on where he will be sitting to capture his reactions. He has positioned the other next to a window for a more picturesque setting when he is being interviewed. Most mock drafts have Gross-Matos being selected in the first round.

The draft is yet another step in what has become a virtual process since the onset of the pandemic shortly after the NFL combine. With pro days canceled and teams not sending anyone on the road, most of the pre-draft interviews have been done on Zoom or FaceTime.

“It has been a little odd forming connections with people, but as it kept going on I took it as an educational process,” Gross-Matos said.

Michelle McKenna, the NFL’s chief information officer, said prospects have had an easier time adjusting to things being done virtually.

“You don't have to tell them how to mute or unmute a phone because they know how to do it. The only issues have been making sure the framing and lighting were going to be right,” she said.

What viewers will see during the draft required building out a massive technical infrastructure over just a few weeks. Some of it already existed because of the amount of video transmitted during games, but this is more extensive due to the more than 100 feeds coming in from prospects, general managers, coaches and fans. Three call centers have been set up to serve as the main point of communication before they are transferred to the ESPN/NFL Network production center in Bristol, Connecticut, to be interviewed.

“I've done a lot in my career and I thought nothing would ever top the challenges of being part of the team for the (design and launch of) Wizarding World of Harry Potter (at Universal Studios Orlando). This tops that,” said McKenna, who has been with the NFL since 2012. “The coordination of building and testing while setting it up in three weeks has been incredible. There isn't a lot of time to talk through changes.”

McKenna said her department has been in contact with internet providers in prospects' hometowns to make sure there is increased bandwidth to avoid lags or delays. They also monitored last Friday’s WNBA draft, also done in a virtual format, to see how interviews went.

“We realize it is going to be a unique opportunity to feel that we are staying home and being safe. We want it to be authentic instead of overdressing it with backdrops or other things,” she said.

Coaches and general managers also received a kit, but it includes only one phone which will always be on. While the information technology departments of teams have put in overtime to ensure homes are set up for the draft, not much rewiring was required in Goodell's basement, where the commissioner will set up during the draft.

Goodell's home in Bronxville, New York, has plenty of televisions in the basement for him to watch games on weekends when he isn't traveling.

“One of the fun things has been seeing how relaxed he (Goodell) has been throughout the process," McKenna said. "He recognizes it is a special moment in history and we can do something unique.”