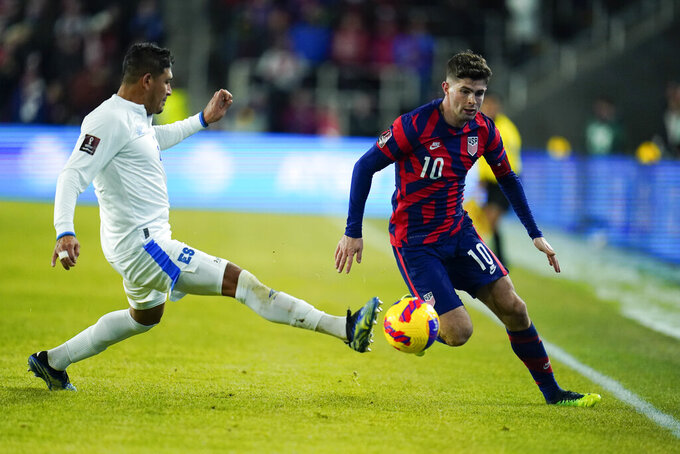 ST. PAUL, Minn. (AP) — Christian Pulisic was benched as U.S. coach Gregg Berhalter changed seven starters for Wednesday night's World Cup qualifier against Honduras in St. Paul, where the temperature at kickoff was 3 degrees (minus-16 Celsius) with a minus-14 windchill.

The previous low for a U.S. home game was 29 degrees (minus-2 Celsius) for the “Guerra Fria” win over Mexico at old Columbus Crew Stadium in February 2001, the Snow Clasico victory over Costa Rica at Commerce City, Colorado, in March 2013 and the 1-0 win over El Salvador at lower.com Field in Columbus last Thursday.

Pulisic, the top U.S. player, had subpar performances in the 1-0 win over El Salvador and the 2-0 loss at Canada.

“We think he still has a big role to play. It's just not in the first half of this game,” Berhalter said on Fox's pregame telecast. “We know he can come in and make an impact. He's done that a number of times before, and we expect him to do that again today.”

Midfielder Tyler Adams and defender Chris Richards got hurt during Sunday’s defeat. Moving on the bench along with Pulisic were right back Sergiño Dest, midfielders Yunus Musah and Brenden Aaronson, and forward Gyasi Zardes.

The USSF supplied the team compression shirts and tights from the company that supplies the Minnesota Vikings and Chicago Bears along with Nike Hypertherm headcovers and gloves, handwarmers, in-sole warmers and a quarterback pouch for goalkeepers, also provided by the Vikings.

There were heated vests for potential substitutes, a heated bench and seatwarmers plus overhead heat and topical heating cream along with hot air pumped in at feet level.

Berhalter, who helped choose the site, said shortened travel during the three-game FIFA window and ensuring a pro-U.S. crowd were primary factors. He repeatedly has said the weather did not present an obstacle and his players should embrace the conditions.

FIFA did not respond to a request for comment Wednesday. Asked about the location after the advance forecast was issued, the governing body said on Jan. 20: “While the safety and security of all individuals involved in football will always be FIFA’s priority, major club and national-team competitions are played in different climates across all confederations and the FIFA World Cup qualifiers are no exception.”

Nicholas Noble, spokesman for CONCACAF, the governing body of North and Central America and the Caribbean, said in September: “World Cup qualifiers is a FIFA competition. CONCACAF does not manage or run these matches, FIFA does, along with the individual federations.”

Goalkeeper Gabriel Slonina did not dress.