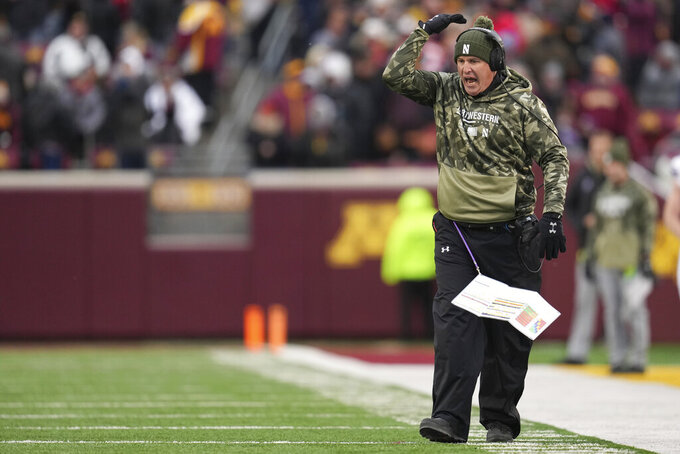 Northwestern head coach Pat Fitzgerald reacts after a pass interference penalty on Northwestern defensive back Devin Turner (23) during the first half of an NCAA college football game against Minnesota, Saturday, Nov. 12, 2022, in Minneapolis. (AP Photo/Abbie Parr) 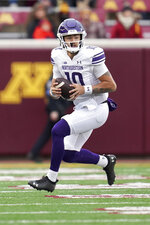 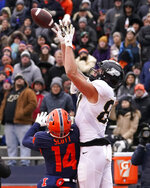 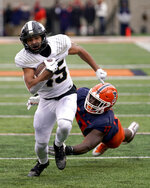 Everything comes down to the final two weeks for Purdue. Beat the Big Ten's two last-place teams, watch Iowa lose and the Boilermakers will make their first conference championship game. A loss likely ends their division title hopes. Northwestern has lost nine straight and is still seeking its first win on American soil this year. Their season-opening win over Nebraska came in Ireland.

Northwestern RB Evan Hull vs. Purdue run defense. The fourth-year runner has become the Wildcats' most consistent playmaker. His versatility and tackle-breaking style are elements that have posed problems previously for Purdue. But the Boilermakers are ranked No. 23 in the FBS against the run. Now they must avoid a repeat of what happened in losses to Wisconsin and Iowa.

Northwestern: DL Adetomiwa Adebawore. He's not the top pro prospect on the roster but he has a good chance of playing on Sundays. Adebawore has been the team's most disruptive force this season, leading the team in sacks (four) and tied for the team lead in forced fumbles (two). If he creates consistent pressure this weekend, it could lead to some miscues from Purdue.

Purdue: QB Aidan O'Connell. His six-year journey from walk-on to all-conference selection won't end Saturday. But it is his last home game. Statistically, O'Connell now ranks among some of the best to ever play at the “Cradle of Quarterbacks.” Another win would give him a chance to do something only QBs Drew Brees and Mike Phipps have done since 1953 — bring Purdue a league title.

Northwestern has lost 15 of its last 16 but has won in each of its last two trips to Purdue. ... Wildcats QB Ryan Hilinski last left week's game after entering the concussion protocol. It's unclear whether he'll play this weeked. ... A win would give Purdue its first back-to-back winning records in league play since 1997-98 and its first back-to-back seven-win seasons since 2006-07. ... Hull ranks fourth in the Big Ten with 1,388 all-purpose yards — 755 on the ground, 509 through the air and 124 on kickoff returns. ... O'Connell has five career 400-yard games including a 423-yard performance in last season's 32-14 victory over Northwestern at Wrigley Field. ... Northwestern has allowed four of its last five opponents to top the 30-point mark. The exception: No. 2 Ohio State finished with 21. The Wildcats have trailed for the last 102 1/2 minutes of game time. ... Purdue WR Charlie Jones, a childhood friend of O'Connell's, leads the Big Ten with 8.7 receptions per game and 1,010 yards receiving.