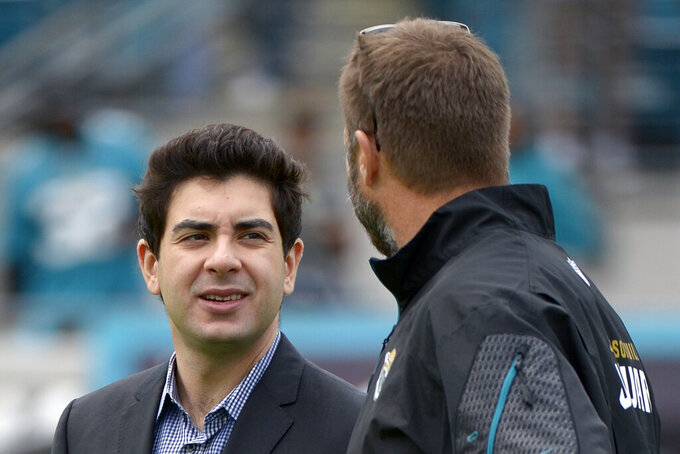 FILE - In this Dec. 15, 2013, file photo, Jacksonville Jaguars senior vice president Tony Khan, left, talks with an unidentified person prior to an NFL football game against the Buffalo Bills in Jacksonville, Fla. Tony Khan has his hands full as co-owner of the Jacksonville Jaguars and with Fulham F.C. of the EFL Championship. He decided to launch his own wrestling company and now All Elite Wrestling is not only nipping at WWE's heels as best in the business, it's set to take over New York on Wednesday night with its Grand Slam event from Arthur Ashe Stadium. (AP Photo/Phelan M. Ebenhack, File)

Tony Khan loved professional wrestling so much growing up, he mapped storylines and wrote scripts for his own imaginary company. He had wrestlers as friends and friends who worked in wrestling. Oh, and he had money, enthusiasm and entrepreneurism, too.

The son of a billionaire, Khan decided being a squared circle fan wasn’t enough — he wanted to shake up the culture and pair his modern spin with an old-school flavor and in 2019, All Elite Wrestling was born.

“If you’ve seen other wrestling and said, ‘This isn’t for me,’ give AEW a chance,” the 38-year-old Khan said. “It’s a lot less likely to insult your intelligence than other shows out there.”

Yes, that’s a direct shot at WWE, the longtime industry leader that essentially stood alone for almost two decades as the preeminent force in American wrestling.

Like the challenger chasing the champion, AEW has turned from plucky upstart into the talk of the pro wrestling world. Khan said AEW’s “All Out” pay-per-view earlier this month had more than 200,000 buys, its weekly “ Dynamite ” TV show on TNT routinely tops 1 million viewers — and has defeated WWE’s flagship “Raw” in the advertiser-coveted 18-49 demographic — and Bryan Danielson, CM Punk, Kenny Omega, Sting and a star-studded roster will set an AEW attendance record when more than 20,000 fans are expected Wednesday night to pack Arthur Ashe Stadium in New York for its “Grand Slam” card.

AEW has fans buzzing — who’s the next surprise superstar to debut!? — and put WWE on notice that it’s a major player for talent, bragging rights, ratings and revenue that countless other promotions have failed to capture. Khan runs it all behind the scenes, adding AEW to his other job titles with the NFL’s Jacksonville Jaguars, English soccer team Fulham FC and his business ventures. He writes and structures AEW programming — which includes four weekly shows and four pay-per-views each year — and those boyhood dreams of booking for a company have come true.

WWE isn’t going anywhere — not with billion-dollar TV contracts and a global reach that includes a roughly $50 million payout for a Saudi Arabia show — but some of its biggest stars are leaving for AEW and the promise of fat paychecks, a lighter work schedule and five-star matches without the “ entertainment ” aspects of performing.

Khan’s funding an AEW videogame, and Mike Tyson, Snoop Dogg, Rosario Dawson and Shaquille O’Neal are among the A-listers who have appeared or wrestled on TV.

And, Khan says, AEW has already turned a profit.

“Our TNT deal is very fair. I think we’ve performed at such a high level that we’ll justify a big increase on our next deal,” he said. “We are very fortunate to have their support. The timing of that deal was great, to get that in January 2020, that is a huge revenue stream for us.”

Khan talked with The Associated Press by phone about AEW’s future as the hottest wrestling promotion in the business. This interview has been edited for clarity and length.

AP: Do you have WWE’s attention? Do you feel it might finally see AEW as true competition?

Khan: I’m a big wrestling fan and I would say, objectively, AEW is the hottest wrestling company right now. So many people who watch wrestling know that AEW’s gaining ground, AEW is hitting all-time highs. It’s helping us build new fans, it’s helping people want to take the leap and check the shows out. I’m sure other wrestling companies are paying attention to that. We have great relationships with a lot of wrestling companies that know what’s going on with AEW. I think if you work in the wrestling business, you’re following what we’re doing and the success we’re having. We’re catching a lot of eyeballs outside of the world of wrestling and mainstream attention, so you better believe in the world of wrestling people are paying very close attention to it.

AP: How did AEW come out of pandemic as a healthy company?

Khan: We made up a lot of market share in that time and really closed the gap between us and our competition. When we went back to packed arenas and got back to full capacity, and really now in recent months, have hit the stride we wanted to hit, we’re stronger than ever. Now all of a sudden we’re the ones who are the No. 1 wrestling show on cable. We went through nearly two years of “Dynamite,” we did 100 episodes and episode 101 was when we finally beat Raw. That was a big milestone for us. Just as important a milestone, was the number we hit, which was so strong, and just as important to us was to be No. 1 on cable for the third straight week.

AP: How can you keep such a loaded roster happy in the future?

Khan: I think that’s a good problem for any organization to have when you have a deep bench. We have a very deep bench right now. I try to rotate who wrestles on television and give TV time to different wrestlers so we have a lot of people with momentum and can switch out the matches and keep things fresh. I think that serves you well in sports, too, when you can rotate and rest people and give experience to young talent and develop people and also rest your veterans so they don’t have to go out and do it every single week.

AP: Have you been surprised by the star talent made available to AEW?

Khan: I had a lot of wrestlers that were very well-regarded in terms of the hardcore fans. But in terms of the very mainstream audience, not as many recognizable names, and I knew I’d have to really build that recognition. I didn’t expect somebody with so much recognition and as much experience wrestling on TV as Jon Moxley would become available so quickly. He has been such a great blessing for this company. He was a great champion through the pandemic. He’s still one of our most important stars today. I didn’t expect that at the time. Since then, absolutely. By making this a great home for wrestling and a place where wrestlers want to work, we’ve had so many people that want to come here, and have defected. It is more than I ever could have dreamed.