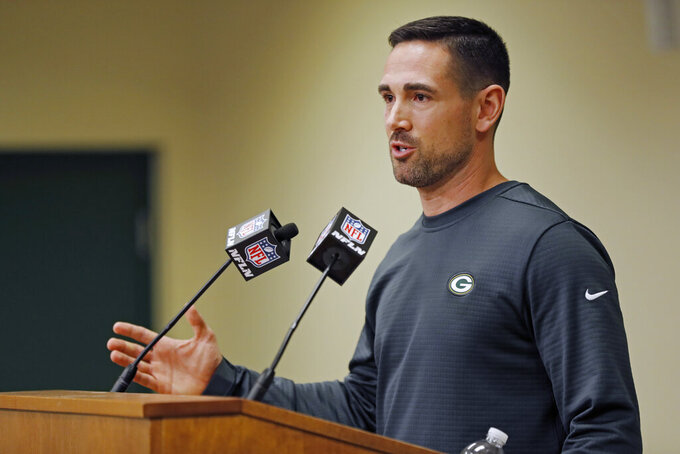 Plus, for the first time in his career, he'll be directing a new offense.

At least there will be a constant for the 35-year-old quarterback: the return of Luke Getsy as quarterbacks coach.

"You've got to earn people's trust, show them how much you care before they're going to care about you and want to do well for you," Getsy said on Monday as the team introduced the staff of new coach Matt LaFleur.

"I think that phase is probably going to just happen quicker, naturally, being here for four years and creating a relationship. That part of it makes the transition much easier.

LaFleur said that Getsy's history with the team was another reason for his hiring.

"Certainly, we're going to find the best quarterback coach that's out there," LaFleur said. "Some things that I really did like about Luke was the fact that he played quarterback in college. I reached out not only to Aaron, but a couple other guys with him being in the building before, just to find out what they thought of him as a man and as a coach, and everybody gave him a thumbs-up."

Rodgers' introduction into the new offense can't start until the beginning of the offseason program on April 1.

There's a lot for the new coaching staff to do before the players return in six weeks, including preparation for the scouting combine, which begins later this month.

LaFleur, Getsy and offensive coordinator Nathaniel Hackett all will have input in the quarterbacks room. Making sure they're delivering the same message to Rodgers and fellow quarterbacks DeShone Kizer and Tim Boyle will be key.

"It has the West Coast roots. The backbone is what he's comfortable," Getsy said. "The timing, the rhythm and all that stuff that he's really, really good at, I think that's all there.

"The principles are there. It's just speaking the language. That'll be the biggest thing — for everybody — because there's a lot of people in this building that have been here a while and have been ingrained in the previous terminology."

Notes: LaFleur finalized his staff on Monday by promoting Chris Gizzi to strength and conditioning coordinator and retaining Mark Lovat, Thadeus Jackson and Grant Thorne as assistants. Gizzi spent the past five seasons working under Lovat, who had been the coordinator since 2010. "That is a critical hire," LaFleur said. "You talk about the guys that are going to talk to the team the most, it's going to myself, it's going to be the special teams coordinator and it's going to be the strength coach. Those three positions are absolutely critical to our success moving forward."