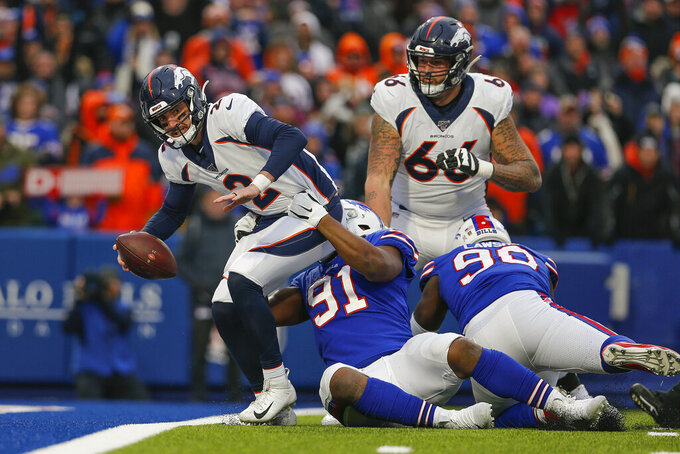 He could get his first start Sunday.

He could be Brandon Allen's backup.

He could be the third quarterback.

He could be in street clothes again.

"We're just going to make that decision here in the next few days," said Fangio, who has until Dec. 3 to activate the second-round draft pick off IR or banish him from practicing again until next year.

Lock, who bruised his thumb in the preseason, returned to practice two weeks ago as one of Denver's two players they designated for a return. The other was Tim Patrick, who provided the Broncos (3-8) with this season's theme when he finished talking about their latest loss Sunday, then turned and told fellow receiver DaeSean Hamilton, "I'm so sick of losing, bro."

So is a restless fan base, which, with one more loss will witness a third consecutive losing season in Denver for the first time since the team posted 10 consecutive sub-.500 records between 1963 and '72.

The quarterback who might be the healthiest and readiest isn't Allen or Lock but undrafted rookie Brett Rypien.

Promoted to the active roster as Allen's backup when Joe Flacco (neck) went on IR at midseason, Rypien has practiced all year, unlike Lock.

Unlike Allen, he didn't get plastered by Buffalo pass rusher Shaq Lawson in Denver's 20-3 loss Sunday.

Allen's helmet bounced off the ground but he stayed in the game, after which he dismissed any notion it affected him even though he was 3-for-4 for 48 yards before the pounding and 7-for-21 for 34 yards, four sacks and an interception post-pummeling.

“I've taken a few big hits," Allen said. "Obviously you get your bell rung a little bit and then you just get right back to it."

Fangio said trainers checked on Allen when he came to the sideline, where "everything checked out fine. The official didn't deem it necessary to — you know how they have the ability to remove a guy from a game. So, he was fine. I spoke to him at halftime about something, nothing to do with his health, but about the game and he was fine with me."

After beating Cleveland for his NFL debut, Allen has lost at Minnesota despite a 20-point halftime lead and at Buffalo, where the Broncos' 134 yards of total offense were the worst in the NFL in 26 years.

Allen has completed just 46% of his passes (39 for 84) with three TDs, as many interceptions and nine sacks.

To earn the starting nod against the Chargers (4-7) this weekend, Fangio said Lock would have to show that “he's OK, physically, which he is, and he's prepared mentally and emotionally."

Fangio said he also would need to see if right tackle Ja'Wuan James (knee) is emotionally ready to return to the field with confidence before he plays again.

And just how does he determine if a player is emotionally ready?

"Just by talking to him, watching him practice," Fangio said.

Fangio said he wasn't sure when he'd name his starting quarterback, suggesting he wouldn't be bound by the typical Wednesday deadline to determine a rotation for his QBs.

The wheezing offense that posted the lowest yards per play (2.9) and fewest net passing yards (49) since 1992.

Justin Simmons, whose 10th career interception is fourth-most in team history for a safety in his first four years.

Fangio said he thought Von Miller's right knee injury was minor: "He came in for treatment today and is getting some tests. But he's fine at this point.” CB Duke Dawson (head); ILB Josey Jewell (ankle); and DE Shelby Harris (ankle) also got nicked in the game.

Determining who will be under center next weekend, then finding a way to protect him.