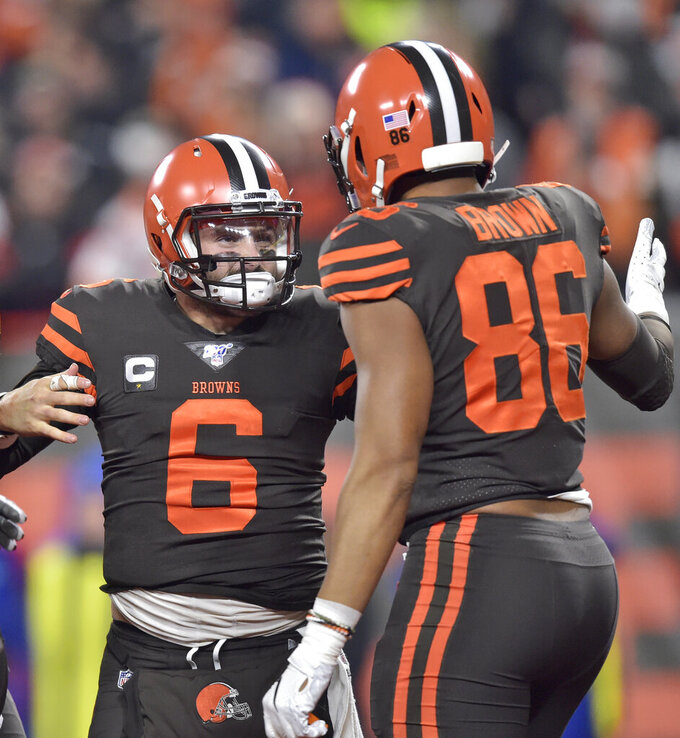 The Browns are going to need more of that from their quarterback.

Mayfield, who has played much better the past three weeks after a slow start to his second NFL season, displayed an established veteran’s poise in the hazy postgame following Thursday night’s ugly sequence when Browns defensive end Myles Garrett struck Steelers quarterback Mason Rudolph in the head with a swung helmet.

During a live TV interview before leaving the field, Mayfield managed to find the right balance by calling Garrett’s act “inexcusable” while also supporting his teammate.

It was a delicate moment, one handled by the 24-year-old Mayfield, who hasn’t always shown such maturity. Earlier this season, he stormed away during an interview after objecting to a line of questioning.

But in a far more serious situation, Mayfield shined.

“It’s a tough spot,” Browns guard Joel Bitonio told reporters following Wednesday’s practice. “It's such an emotional game anyway. You know they try to give us a 10-minute cool-down period to not talk to you guys you don't want to say anything you'll regret, and he's on the field talking about it pretty much as we see it happening. It was a tough spot for him, but I think he handled it like a leader.”

For Mayfield, it’s part of the gig.

As the unquestioned face of Cleveland’s franchise, Mayfield carries the burden of performing on the field while handling non-football duties off it. It’s a strange mix of player and public relations spokesman.

Browns coach Freddie Kitchens was pleased with how his young QB stepped up in a scalding spotlight.

“There are a lot of emotions in football, and then when you walk off the football field, those emotions do not just stop,” Kitchens said. “Sometimes you just say what you feel at the moment. I was the same way. You get asked questions and you want to answer questions. You want to be truthful with people, and I think he did a good job of that.”

Mayfield downplayed the impact of his postgame comments. However, he did acknowledge some of his past experiences helped prepare him for the kind of adversity the Browns are facing in a season of roadblocks.

“I would not say that I am made for this moment,” said Mayfield, who has five touchdown passes and no interceptions in the past three games. “It is just about being that person every day that this team needs in the position I am in being a captain and showing the way and setting the standard, like the things I have been talking about. I would not necessarily say that I am made for this moment. I think I was made to come here in Cleveland and try and set the standard and culture each and every day.”

Mayfield said he has spoken with Garrett, who had the appeal of his indefinite suspension heard Wednesday in New York. A ruling is expected in the next two days.

Mayfield wanted to make sure his teammate didn’t feel alone.

“I’ve been in that moment,” he said. “It was a smaller scale in college — my Kansas mistake. You feel that weight of everybody crushing you. I wanted him to know that we have support for him, and he can lean on us.”

Mayfield was referring to an incident during his senior season at Oklahoma. After some Kansas players refused to shake his hand during the pregame coin toss, Mayfield grabbed his crotch while shouting expletives at the Jayhawks during the game. He didn’t start the next game, and the moment added to that reputation.

Mayfield has mostly toned down those antics, though there are still times when his emotions run high.

As for his play, Mayfield is looking much more as he did a year ago, when he broke the league’s rookie record with 27 TD passes. He’s making better decisions with the ball, staying in the pocket and delivering passes with accuracy.

"Baker has come into his own again,” Bitonio said. “He had some unlucky turnovers I would say early in the season and that kind of carried over a little bit. But he's kind of looking like himself. He made a few plays with his feet, made some throws, even ran the ball in one time on the QB sneak. It's some life, some good things that we're seeing from him, and I know he's extremely focused right now."

NOTES: Bitonio (groin), WRs Odell Beckham Jr. (groin) and Jarvis Landry (hip) were limited in practice. ... TE David Njoku practiced for the first time since breaking his wrist in Week 2. Njoku is eligible to play Sunday, but Kitchens wants to gauge his readiness first. Njoku decided to have surgery after initially saying he wouldn’t. “I’m very impatient,” he said what changed his mind. “When I want something, I want it right now. Without surgery, it looked like it would make me wait a little bit. I didn’t have time for that.”