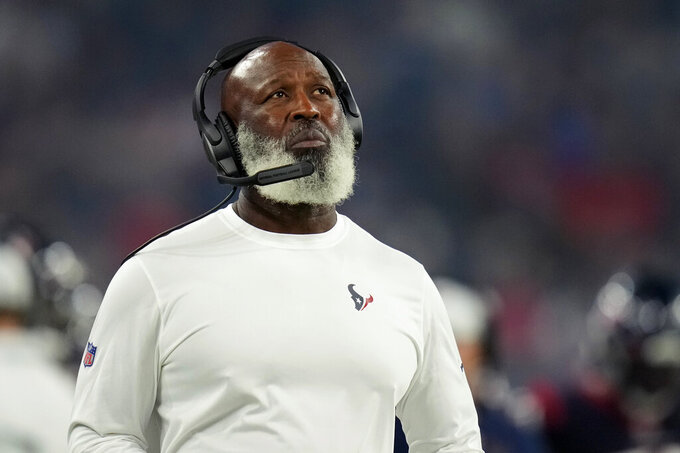 Houston Texans head coach Lovie Smith on the sidelines during the second half of an NFL football game against the San Francisco 49ers Thursday, Aug. 25, 2022, in Houston. (AP Photo/Eric Christian Smith)

OPENING LINE: Colts by 7 1/2, according to FanDuel SportsBook.

TURNOVER DIFFERENTIAL: Colts plus-14; Texans plus-3.

COLTS PLAYER TO WATCH: WR Michael Pittman Jr. Yes, Matt Ryan makes his Colts debut Sunday and the NFL’s defending rushing champ Jonathan Taylor will get his first carries since sitting out the preseason. But in a young, inexperienced receiving group, Ryan will look early and often to his most experienced and top playmaker.

TEXANS PLAYER TO WATCH: RB Dameon Pierce. The rookie fourth-round pick from Florida used an outstanding camp to climb the depth chart and will start Sunday. The hard-running Pierce was so impressive in the preseason that the Texans cut veteran Marlon Mack, who entered camp as the presumed starter. Pierce joined the Texans after a four-year career with the Gators where he had 1,806 yards rushing and 23 touchdowns.

KEY MATCHUP: Ryan vs. Houston’s revamped secondary. Ryan joins the Colts after a 14-year career in Atlanta where he was a four-time Pro Bowler and the 2016 MVP. Sunday he’ll test a new-look Texans secondary that will feature two rookie starters. Third overall pick Derek Stingley will start at cornerback and second-round selection Jalen Pitre is starting at one of the safety positions. Stingley is expected to have no restrictions in the opener after coming along slowly in camp while recovering from foot surgery that limited him to just three games last season.

KEY INJURIES: The big question surrounds three-time All-Pro LB Shaquille Leonard, who was cleared to practice for the first time last week. Colts coach Frank Reich hasn’t said how much he’ll play, if he’ll be on a pitch count — or even if he’ll play — Sunday. ... Colts DE Kwity Paye missed the preseason finale after hurting his left knee in practice, but coaches remain confident he will be on the field for the opener. ... Colts S Julian Blackmon is expected to start after finishing last season on injured reserve (torn Achilles tendon). ... P Matt Haack will make his Colts debut in place of Rigoberto Sanchez, who tore an Achilles tendon in training camp. ... Houston OG Kenyon Green, the 15th overall pick in the draft, is expected to be ready for the opener after missing significant time in camp with a knee injury and a concussion.

SERIES NOTES: Indy opened the series by winning nine straight and now has won four in a row. The Colts also have won seven of the past eight against the Texans. ... The Colts own 12 of the 13 series sweeps. ... WR T.Y. Hilton who posted some of his best games against Houston is not on Indy’s roster for the first time since 2012. ... Former Texans WR Keke Coutee is on Indy’s practice squad.

STATS AND STUFF: The Colts have lost eight straight season openers and 11 of their past 12 overall. ... Ryan needs 265 yards passing to become the eighth player in league history with 60,000 yards. If he does it in career game No. 223, he would be the second-fastest to achieve the feat. Drew Brees did it in 215 games. ... Taylor needs 20 yards rushing to become the second-fastest player in franchise history with 3,000 career yards. Edgerrin James achieved the feat in 30 games while Taylor is expected to play in his 33rd. Taylor had 14 carries for 145 yards against Houston in October. ... Last season, Indy and Dallas shared the league lead in turnover differential (plus-14) and the Colts scored a league-best 122 points off turnovers. ... Houston won its opener against Jacksonville last season before dropping the next eight games. ... The Texans have finished with just four wins in each of the past two seasons after winning the AFC South the two seasons before that. ... WR Brandin Cooks led the Texans last season with a career-high 90 receptions for 1,037 yards and six touchdowns. He joins Tampa Bay’s Mike Evans as the only players to have at least 1,000 yards receiving and five TD receptions in six of the past seven seasons. ... QB Davis Mills returns after starting 11 games as a rookie in 2021. He had 2,664 yards passing with 16 touchdowns. ... LB Kamu Grugier-Hill led Houston with a career-high 106 tackles, including 13 for losses last season. ... LB Christian Kirksey had 93 tackles and his eight passes defended were tied for second most among linebackers in the NFL last season. ... DE Jonathan Greenard led the Texans with a career-high eight sacks in 2021. ... DE Mario Addison makes his Houston debut after finishing with seven sacks for the Bills last year.

FANTASY TIP: Pierce could be a good pickup as the Texans are expected to go to him early and often as they attempt to improve a running game that was the worst in the NFL last season.