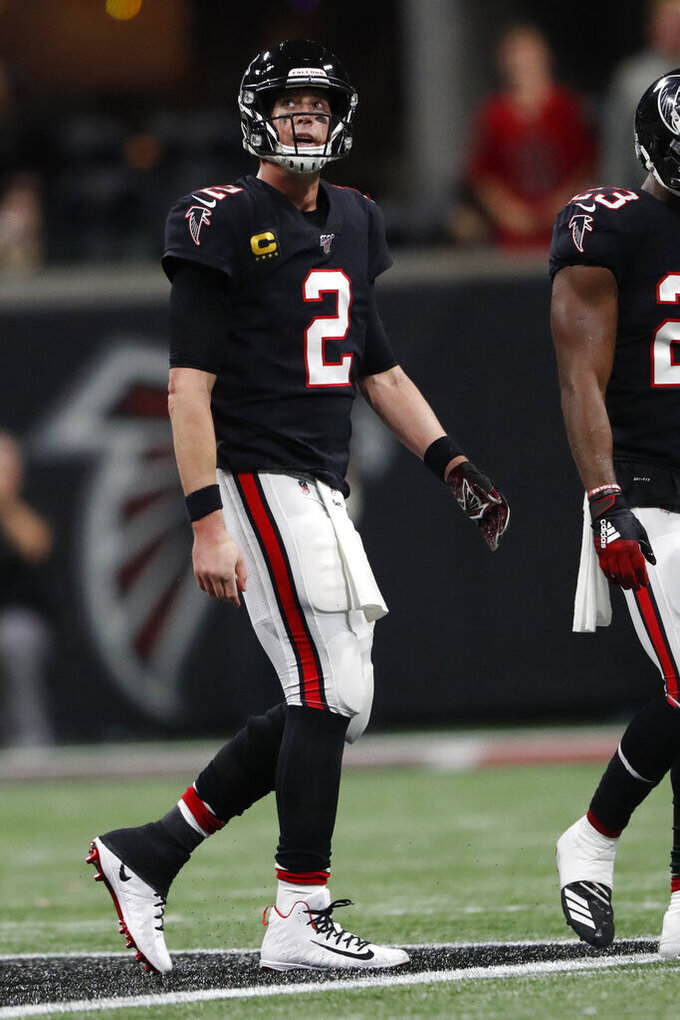 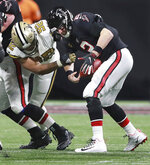 By the time the game ended, Ryan had been sacked nine times, tying a career high set six years ago, and giving him 15 sacks taken over the last two weeks.

The Falcons’ 26-18 loss to New Orleans on Thursday night was just the latest in a long season of setbacks. This defeat, though, was mostly on the shoulders of Ryan and the offense as Atlanta was eliminated from playoff contention.

“We had to drop back and pass at the end of the game,” the 2016 NFL MVP said. “When you do that and there’s really no threat of run, it’s tough sledding, particularly when you’re going against a good defense, a very good defensive line and one of the better pass rushers in the game in Cam Jordan. It was difficult, but I’m proud of the way the guys fought.”

Ryan threw two interceptions and lost a fumble on three straight possessions in the second half, killing the best chance of a rally. Atlanta (3-9) lost its second straight game, playing again in front of tens of thousands of empty seats at Mercedes-Benz Stadium against a division rival.

Injuries forced the Falcons to play without two-time All-Pro receiver Julio Jones and their top two tight ends. Jones’ sore shoulder kept him out of a game for the first time in three years. Austin Hooper, who led NFL tight ends in catches and ranked second in yards receiving at the time of his injury, missed his third straight game with an ailing knee.

Atlanta kicker Younghoe Koo was inconsistent, missing wide left in the first half on both an extra point and a 42-yard field goal attempt before hitting from 44 to trim the deficit to 17-9 just before halftime.

Just as they did in the embarrassing opener at Minnesota, the Falcons began the game with breakdowns in all three phases. Ryan, who completed 35 of 50 passes for 312 yards, was sacked on the first snap as the offense went three-and-out. Ryan Allen had a punt deflected by Taysom Hill, and the Saints went up 7-0 four plays later on Drew Brees’ short touchdown pass to Hill.

The offense opened the second quarter by stalling on fourth-and-1 at the 2 when Ryan couldn’t hook up with Christian Blake. A 35-yard pass interference penalty on the next possession set up Ryan to throw an 18-yard strike over the middle to tight end Jaeden Graham, but the Saints quickly went up 10-6 on a 22-yard field goal after Jared Cook had a wide-open touchdown pass bounce off his hands.

The defense, which ranks last in the NFC with 18 sacks, failed to get one for the second straight week and has seen its pass rush revert to early season form.

Atlanta held Brees to 184 yards passing, but it didn’t matter. Hill broke off a 30-yard TD run out of a wildcat formation, and the Saints won the field position battle.

That the Falcons had a chance at the end was due to a pair of onside kick recoveries that resulted in Ryan’s 13-yard TD pass and Koo’s 43-yard field goal. But the final snap ended with Jordan getting his fourth sack and the drive stalling near midfield with 38 seconds remaining.

Now, Ryan is back for the second straight year to play games that won’t matter in December. It’s not where he wanted to be.